I will discuss two related topics on the role of government in IPR. See my earlier discussion on why fellow free marketers and advocates of individual liberty do not believe in IPR in Part 6.

Should IPR be granted by governments only?

Currently, governments through their Food and Drugs Administration (FDA) and Intellectual Property Office (IPO) or similar agencies, are the ones that produce the various regulatory and health requirements then grants (or denies) the IPR application by the innovator pharma or biotech companies. There is no private entity yet like those private credit rating agencies that does the job. Government would think that bublic health is too important to be left to the market players and thus, unlucky for us, it seems improbable that government will abandon this function.

Let us assume just for discussion purposes, that one government in the rich world will allow a private body, say a federation of pharma + biotech companies + universities, with DOH/MOH participation, to grant or deny an IPR application for drug molecules.

Most likely it will be a less bureaucratic set up than existing government FDAs' approval process. Thus, the entire regulatory procedures before a drug can be finally marketed to the public will be shorter, less than the current 10 to 12 years. It is not the regulatory procedures that will put fear in the hearts of the innovator pharma companies should they produce an ineffective or effective but unsafe drug. It is the fear of being sued left and right and from many countries that will put fear and internal discipline for the pharma companies.

Between a government and a private agency that will grant or deny the IPR application, I would choose the latter, for the reason I cited above. But nonetheless, I am indifferent for now of who should give or grant the IPR, government or private. The point is that there should be a mechanism to assure those who invested huge amount of time and money to give us effective and safe medicines, to recoup their investments. Those drugs and vaccines will save or prolong our own lives and the lives of our loved ones anyway.

I think that most if not all legislations after the State has expanded, are favoring certain vested and crony interests, mostly local. I discussed for instance that the Renewable Energy (RE) law is cronyism in favor of the wind, solar and other renewable plants. See here, Energy rationing and climate alarmism, part 2. 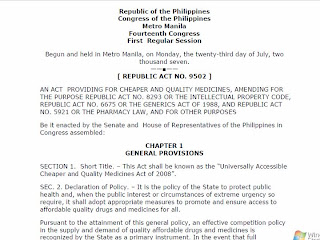 The current Cheaper Medicines Law also has the signature of favoring local pharma which have the capacity at large-scale manufacturing of drugs that can be issued a CL or can use the “early working” provision. It appears to me that the CL benefactor is saying, "The high cost of your innovator drug’s R&D is yours and yours alone; the losses of your non-successful or non-profitable drug molecule are yours and yours alone. But your successful and profitable drug invention is also MY invention too."

Government can give in a silver platter, certain favored local companies this kind of privilege. Luckily, CL has never been issued so far. I think the main reason is not that government regulators and politicians suddenly have a change of heart and decided not to issue CL. Rather, there are no more blockbuster drugs with long patent life remaining in the market. Most if not all have their patents expiring in 2 years or less. The cost of litigation is high compared to just waiting for those patents to expire naturally.

I have argued before and I will repeat it here – government’s multiple taxes on drugs (import tax 3 to 5 percent; VAT 12 percent; local taxes, etc.) that contribute to expensive medicines were never touched or withdrawn by RA 9502. Government taxes, over-regulations and local cronyism conspired to discourage the entry of more innovator companies.

The good thing is that competition in the generics drugs is intensifying among more and more players. Major players producing different drugs from the same drug molecule only compete in branding and brand loyalty by customers.
Posted by Bienvenido Oplas Jr at 12:19 PM