There are several indicators that a group is insecure and unsure of its position, or deep inside it may already recognize that its position is wrong but it has already started lying, and they must continue the lie. One is cowardice to public debates when frontally and explicitly being challenged. Two is censorship, disallowing contrary comments and make it appear that no one is challenging them anyway. 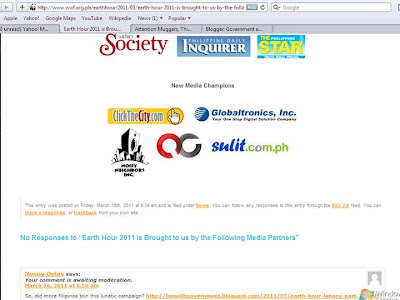 After I posted Earth Hour lunacy part 2, I posted in the comments section of Media Partners of Earth Hour/ page. I wrote there last Saturday morning:

Then I copied it on print-screen as proof as I suspect that WWF will remain allergic to contrary comments and will remain a coward to public debates.

It's now Wednesday or 4 days after I posted in their comments section. Did they approve the comment? 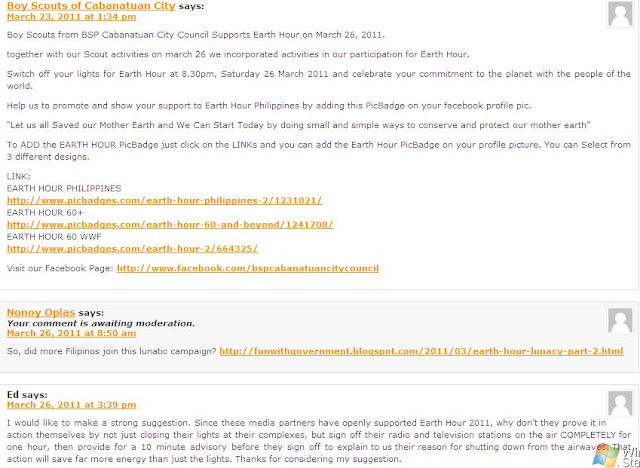 No way. Two otner comments that said "Halleluiah to EH" were posted but my comment is still "awaiting moderation." Yeah, right. Only "pat my back" comments allowed, critical comments are disallowed.

Now let's go back to hard data and facts about climate. Is the Earth really on "unprecedented warming"? No precedents of warm period in the past, only recent warming and climate change due to humanity's modernization and continued use of non-renewable energy, continued high use of electricity? 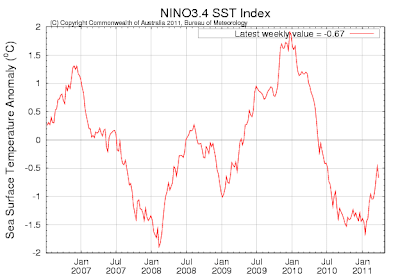 This is the graph of sea surface temperature (SST) anomaly as of March 27, 2011, in Nino region 3.4, the biggest area of equatorial Pacific Ocean. Data is from Australia's Bureau of Meteorology.

The temperature anomaly (or deviation from average temperature) has increased a bit from its low of about -1.6 C sometime in early January this year, to about -0.6 C as of last weekend. Still in the negative and La Nina territory. Terrible "man-made global warming", sustained cooling of the planet's sea surface, equatorial Pacific, for many months now. 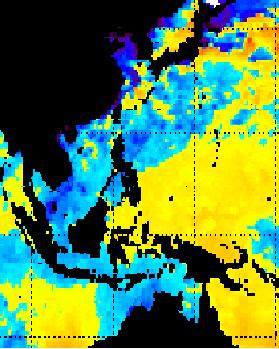 And here is the SST anomaly around North- and South-East Asia as of last Monday, March 28, 2011. Blue is colder than normal, yellow is warmer than normal. Data is from the US government's NOAA

So at the time that the Philippines was making a record of having the biggest number of fooled-by-WWF EH of "catastrophic man-made warming", the Philippines and nearby countries in East Asia were enjoying colder than normal ocean and air. Take note also the cloudy sky everyday in Metro Manila and many other places in the Philippines, even in late March.

And here is the longer story of warming-cooling-warming-cooling cycle of Pacific Ocean from 1950 to 2011. Data is from NCDC/NOAA., also incorporated in the above WUWT's ENSO page.

For those wondering why all the planet's major climate and oceanography research centers are focusing on measuring temperature changes and anomaly in equatorial Pacific, well Pacific Ocean is the biggest of all bodies of water in the planet, covering about 30 percent of the Earth's total surface area. The Atlantic Ocean, Indian Ocean, Arctic Ocean, other seas, they are also big but not as big as the Pacific. The planet's climate is largely modulated by temperature changes (warming-cooling cycles) in the Pacific Ocean.

"Unprecedented warming" -- anyone, please say that again? If people believe that the planet is really in danger, they should turn off their lights many hours every night the whole year, not just 1 hour per year. 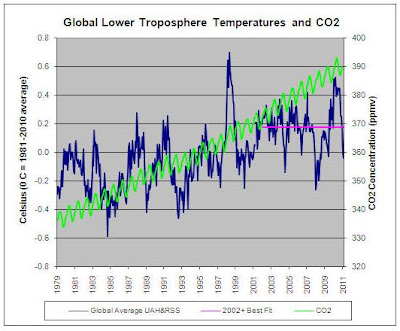 And here is a graph of air temperature (lower troposphere, about 8 kms above sea level) vs. carbon dioxide (CO2) concentration in the atmosphere. Air temperature data (blue line) are gathered by satellites and interpreted by the Univ. of Alabama in Huntsville (UAH) and the Remote Sensing System (RSS). So the blue line is the average of UAH and RSS data. CO2 concentration (green line) is measured at Mauna Loa, Hawaii. This graph is from the Friends of Science.

Air temperature data from January 2002 up to February 2011 (red line, best fit) showed a 0.0 C temperature anomaly. Zero warming over the past 10 years after warming-cooling in those years have cancelled each other. Meanwhile, CO2 concentration keeps rising, persistently.

The EH is a big project to keep fooling hundreds of millions of people around the world. To keep climate alarmism high on their political agenda. There are tons and tons of money and political power involved in more environmental regulations, more energy taxation, more climate loans, more global climate meetings, more climate bureaucracies.
Posted by Bienvenido Oplas Jr at 1:14 PM