After my wallet was stolen by bus thieves 2 Wednesdays ago along with my driver's licence  (DL) there, I got a new DL last Friday. By Saturday morning, May 23, while driving at Roxas Blvd and turning right towards SM MOA, that  new DL was confiscated by a Pasay traffic enforcer for a heinous crime of .... not wearing my seatbelt.

Below left, the OVR he issued. Notice that he even signed the space for the motorist, he was probably rushing  to get a "quota" of apprehensions for the day. The receipt for P250 when  I got back  my DL yesterday. 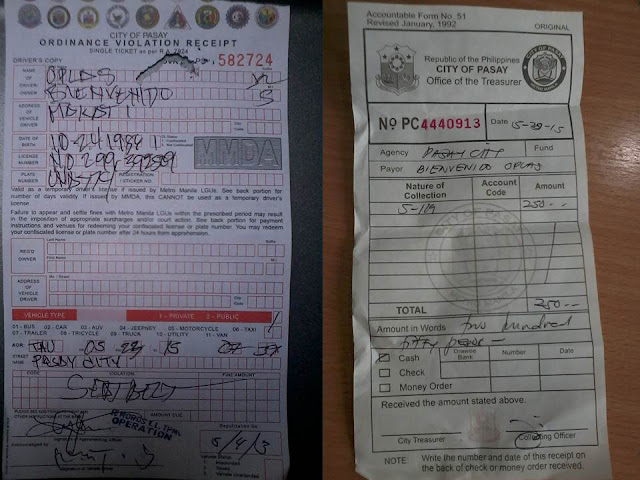 I tweeted MMDA and Pasay Public Information Office (PIO) that day, and the two agencies did not reply quick, my friend Albert Lim commented, below. 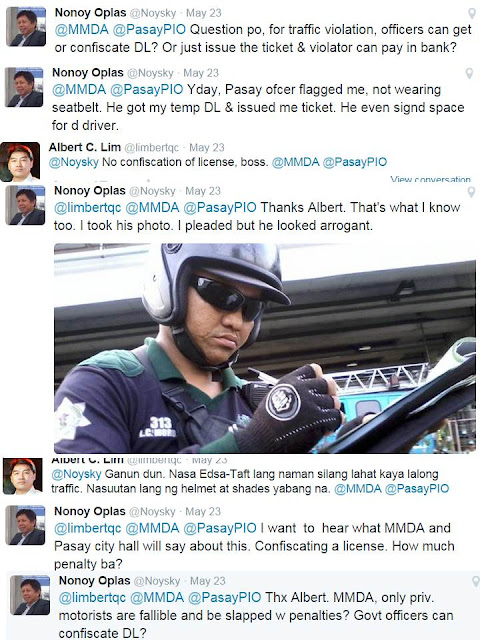 The traffic officer's family name is Remoros .  He looked and sounded unfriendly and arrogant, the usual faces and attitudes of many government personnel in frontline operations. So that if  the  public should plead with them, "pakiusap", they are hard to be approached and their extortion charge, if the public will persist with a pakiusap, their price is high.

In my case that instance, I tried to plead with him as it's a minor case, he wouldn't listen. So I took his photo, he was aware of it. And his photo indeed showed the face of unfriendly and arrogant officer. 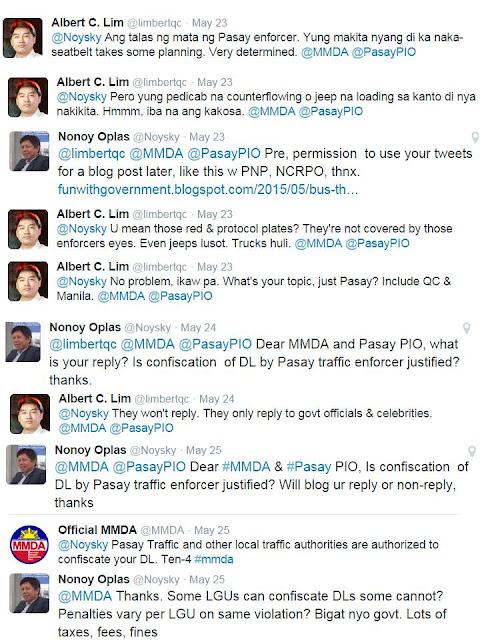 Thanks Albert. Meanwhile, Pasay PIO never bothered to reply. Maybe they are not interested in answering public concerns and questions, they are only interested  in getting more money from the public. MMDA I remember last year or two years ago, went around in media explaining that confiscation of DL is no longer allowed. Apprehended motorists can just pay the fine/s in a bank. Now MMDA says some LGUs can confiscate DLs.

In many cases, pabigat talaga gobyerno. We pay many taxes and fees already to sustain their huge and bloated bureaucracies, and we have to pay fines to them for minor issues, like forgetting to  wear a seatbelt.

Below is the matrix of fines  at the Pasay traffic redemption office. I took this photo while waiting for my name to be called. 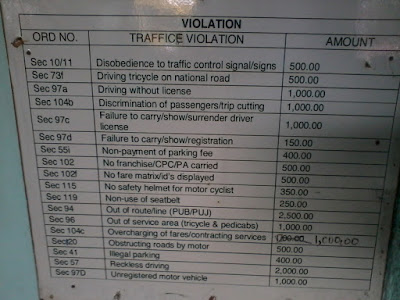 On another  side is a huge tarp banner showing  Pasay City's revenues and expenses for the month  of April 2015. Here's the list of revenues. Notice substantial collections from fines and penalties. 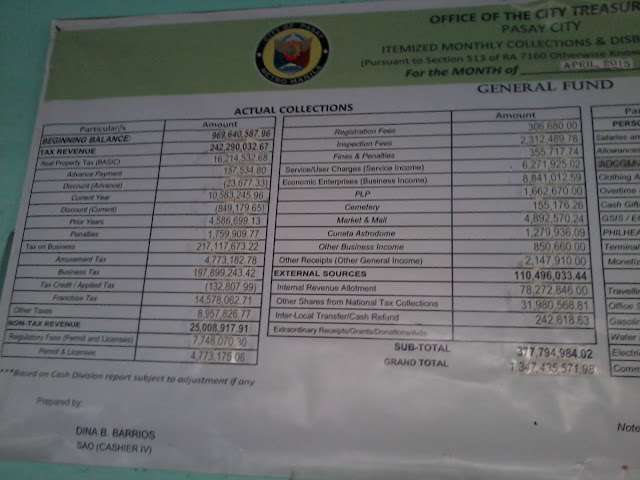 Hayyy, daming bayaran sa gobyerno. And they are not  even  the  national government, local government units (LGUs).

One more reason why governments -- local, national  and multilateral/international -- should shrink significantly.
-----------

Hi.If nahuli and nagkaticket which is the OVR, where should I go to claim my license and pay for the fine?