Bus Thieves and the PNP, Part 2

Here is a continuation of my tweet exchanges with some PNP offices after I lost my wallet to bus theft/thieves four days ago. I noted in Part 1 that "I think the PNP national and regional offices are trying to be responsive to citizens' online reports and complaints." 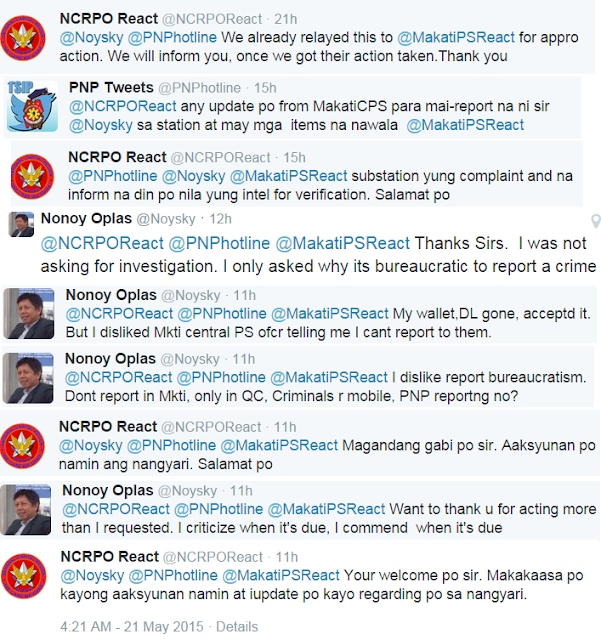 I am happy that the three PNP offices were responding to my concern.

I did not go back to Makati Central Police Station anymore. I think there is no need for a blotter report as these tweet exchanges are sufficient, they involve three PNP offices -- PNP national hotline, NCRPO and Makati Police. And as I stated and tweeted above, I was not asking for an investigation because the facts are hazy: I don't even know how many (1, 2 or more?) bus theft/thieves that night, I don't even know their faces, height or built, I don't know where they got off after, I don't even remember the Manila busline that I took, etc.

I only complained why the PNP Makati would refuse taking a report from a Makati resident simply because I discovered or noticed the crime done unto me when I was already in Cubao area. For me, katamaran  lang yon eh. After the PNP National and regional offices have intervened, PNP Makati softened and asked me to come back and make the blotter report. Thanks for the invite Sirs, I appreciate it nonetheless.

And thanks once again to  PNP hotline, PNP NCRPO, PNP Makati, for responding to such citizen complaint.

On another note, I  think the PNP, national and regional offices, should improve their intelligence gathering of bus robbery and even bus hold ups. I am sure there are many other victims who did not bother to report to the PNP via police stations/precincts, or via social media like twitter.

They should be more pro-active, get more info about those criminals. Like I heard from some friends who were also victims of bus robbery in the past, that for north-bound buses, the criminals usually do the hold ups between Ayala Ave, or Magallanes to Estrella in Makati, get off at Estrella. Why there? Because there are no policemen or MMDA officers in Estrella bus unloading areas.

To get public respect and support, the PNP should make our streets, buildings, buses, jeepneys, etc. more safe from criminals. The frequent complaint that I hear or read, and which I also agree with, is that the PNP is busy apprehending non-criminals like motorcycle drivers on slippers or not wearing helmets. And the real criminals are more free doing their public harassment and robbery. I sincerely hope that the PNP can turn their attention and guns on the real criminals. That is what they are hired and paid for from our taxes.
------------