I am not following closely UK politics, but the huge victory of the Conservatives means partly a backlash against avid Greenism? One example is the defeat of UK's climate change Secretary Ed Davey. From mirror.co.uk, below.

“However, I want to make it clear that if there is a Conservative Government in place we will remove all subsidy for on-shore wind and local people should have a greater say.

“Frankly I think we have got enough on-shore wind and we have enough to be going on with, almost 10 per cent of our electricity needs, and I think we should give local people a say if they want to block these sorts of projects.

“The only way to stop more on-shore wind is to vote Conservative there is no other party with this policy. We are saying very clearly we would remove the subsidy and give local people the power to say yes or no." -- David Cameron during the campaign period. From countytimes.co.uk/ below. 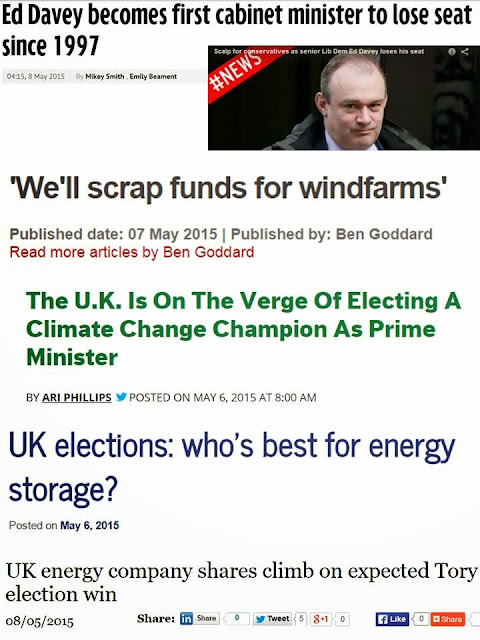 One day before the UK elections, some greens were praising Ed Milliband as "A climate change champion". These greens, they hated Cameron? From Climate Progress above,

“Milibrand’s Labour party is calling for a policy to reduce carbon emissions from electricity generation to zero by 2030.

In an op-ed in the Guardian this February, Miliband wrote that tackling climate change is the “single most important thing we can do for our children and our grandchildren.”

“There is no trade-off between tackling climate change and building an economy in which working families succeed,” he wrote. “Indeed, success on one will help us achieve the other.”

And from Energy Storage Report,

"Labour, currently trailing the ruling Conservatives by a photo-finish margin in opinion polls, has issued one of the strongest renewable energy promises in the electoral campaign, with a plan to de-carbonise the UK completely by 2030.

“We will work to make Britain a world leader in low carbon technologies over the next decade, creating a million additional green jobs,” says Labour’s manifesto."

Maybe many British voters were scared of this scenario?

Meanwhile, some sectors in Britain are happy that the Conservatives were winning. News above from Utility Week.

"The industry came under heavy political pressure after former energy secretary Miliband proposed a raft of energy industry interventions eighteen months ago, which shadow minister Caroline Flint vowed would overrule the findings of the ongoing Competition and Market Authority probe.


Investors at Citigroup said the election result is a “benign outcome” for the industry “as the threat of arbitrary regulation and tariff setting, which was a high probability under Labour's manifesto, has diminished”. May 8, 2015.

Those news reports above point out that the Greens, whether from the Green Party or Labor Party, can be losing grip and support from UK's electorates. Ecological central planning will not work over the long term.