Liberty and Property Rights in the Pacific Rim
June 2008

The main reason why individual liberty is often restrained in favor of “collective liberty”, is supposedly to ensure equality in society. Growth without equity, in this belief, is undesirable and thus, the state must always step in to take away the “excess” income and savings of the hard-working individuals and “excess” profit and surpluses of efficient corporations. Then use the collections to pay for the salaries and benefits of the administrators of the collective (the bureaucracy and politicians in government) and the excess be distributed to the poor, state enterprises, and some inefficient but favored private enterprises, in the form of subsidies.

The subjects of liberty and property rights were at the center of the recent PRPX in Hong Kong. It was the second event after the 1st PRPX held in Honolulu, Hawaii, last May 2007.

Among the panels that attracted me most were those on real property rights, IPR and taming the beast (the state). It’s very enlightening, or perhaps depressing, to know that many governments around the world are responsible for very complicated, time-consuming and costly procedures in registering a property. The result is that many owners of real properties like land, do not have peace of mind in saying that they indeed have full control of their lands, whether to keep it for whatever use, or sell and exchange it for money or other real properties. This lack of peace of mind force them to sell their land at a much lower price, or discourage them from putting in new and bigger investment to develop their real properties.

Protecting IPR – someone’s song composition, research data and methodology, technological invention, medical innovation, and so on – is also very important. If another singer can just steal a lesser-known musician’s songs and record them and claim them as his own composition, the latter would feel robbed. If other companies, including state enterprises, can just steal the formula of an effective and best-selling pharmaceutical product because they were allowed to do so by the state in the name of “national emergencies”, the company that invented that medical product (and spent many years and several hundred million dollars in R&D) would also feel robbed. And there are many governments, upon the prodding of some activist groups, itching to do this kind of intervention and legalized stealing. 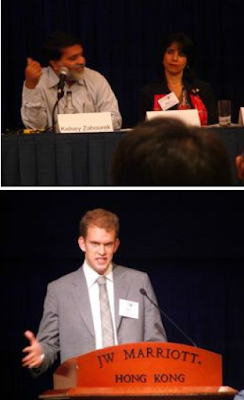 To me, such unnecessary bureaucracies in registering real or physical properties, and disrespect of the IPR of an innovator company, is one example of “government failure”. I firmly believe that protection of the citizens’ right to life, right to dignity and right to private property, are the state’s main function. Running and operating banks, power plants, pension funds, hospitals, universities, or engaging in rice trading and broadband deals, are secondary or unnecessary state functions because these are better left to the private sector in a deregulated and competitive business environment. There is pressure on private enterprises to perform well and satisfy customers in a competitive and level playing field, while there is complacency, resulting in mediocrity, when a service is under the hands of government. This is because private enterprises depend on revenues from customers who voluntarily come to get their services, while government enterprises depend on subsidies from taxes and fees that are forcibly collected from the people.

And how could one tame the beast? A Hong Kong speaker suggested “declaw it, one claw at a time, and blind it, if you can”. I agree with this proposal, although achieving it is very difficult because the number of claws, those various regulations, seem to be increasing, not decreasing. And very often, those regulations are not transparent; one would not know them all, including the fees, hidden requirements, and the number of days, weeks or months to wait, until he/she gets there, in front of the concerned regulatory office. Forcing the government, both national and local government units, to become more transparent should be a good challenge for citizens since the total cost of (a) taxes and fees + (b) cost of compliance can be high which siphons the people’s energy and resources away from actual productive undertaking.

Aside from the six panels or subjects, the conference also featured 2 luncheon speakers and 2 dinner speakers on those 2 days, and all of them were articulate speakers. But the most influential of them all was Jimmy Lai, founder of Next Media communications in HK. He was also the main character in a documentary called “The call of the Entrepreneur” produced by Acton Institute. The man had a typical rags-to-riches story due to non-typical character of super-hard work and strict business ethics. He was emotional in the documentary when he related how hard his and his family’s life was, both in mainland China until he was a teen-age migrant worker in HK, and how his philosophy in life changed after he read Friedrich Hayek’s “The Road to Serfdom”.

Is democracy a political condition? Many people would nod in answering this question. But Jimmy Lai says NO, because for him, democracy is a moral issue. The freedom that people enjoy in a democracy is a deep moral right, something that they will not experience in a dictatorship where the citizens are worth nothing except as adjunct and slaves of the state and state leaders, the dictators. And most importantly, Jimmy Lai says what matters most is individual responsibility, how individuals should conduct their lives. Yes, individuals have the option whether they can be ambitious and hard-working, or be lazy and dependent on family or state subsidies. So his message to the state, “leave us alone.”

Incidentally, the recently published book by ATR President Grover Norquist, has the same title, “Leave us Alone [Getting the government’s hands off our money, our guns, our lives]”. Grover distributed his fascinating book to all conference participants FREE! And not only that I got my copy signed by Grover himself, I also got extra copies for some friends and officers of our think tank. 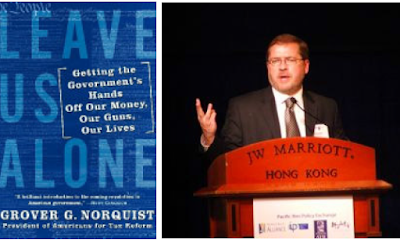 Participants do not just listen to the speakers. They also meet old and new friends and exchange ideas on various issues, as well as how to further improve their work in promoting individual liberty, protecting private property rights, and advancing freedom in general. I particularly enjoy this networking aspect of big international conferences and meetings.
------------