Bus Thieves and the PNP

Yesterday morning, I left the office in Makati around 2:20-2:30am. I was going to our farm in Bugallon, Pangasinan. I took an an aircon bus going to QC around 2:30 am, I briefly slept. When I woke up somewhere in Cubao Farmers Plaza, I was shocked to see that my wallet is gone, my pant's right front pocket was slashed. First time in my life that I was victimized by bus thieves. 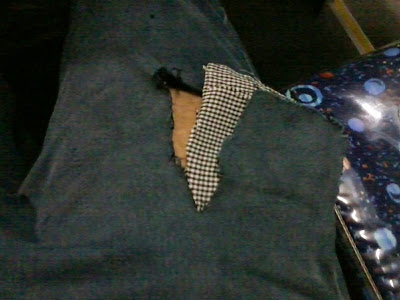 I posted this in facebook, courtesy of bus wifi. I was supposed to cancel my trip as I have no more money to pay for the bus fare to Pangasinan. But I called up the farm caretaker and asked if he has money, he said yes, so I I talked to d bus conductor, 5 Star bus, that my payment will be upon arrival. He saw my slashed pant, he agreed.

My cp was in my left front pocket, it was not slashed. I think I slept for only 10 mins. The theft/thieves was/were quick I didn't feel it. I was tired n sleepy coming from  the office. Just small cash in my wallet but I must get a new drivers license, bank ATM, HMO and SSS cards. Asar lng.

I went back home in Makati around 10:45pm. Then I went to Makati Central Police Station around 11:30pm. Purpose is to have a police blotter of the loss of my wallet and driver's license. I was told by the attending officer, SPO3 Gutierrez at the Investigation Division I think, that I should report for blotter at QC Police because I discovered the loss when the bus was already in Cubao area, QC. I explained that I was not asking for an investigation, just to have a blotter report that my driver's license was stolen and might be used for other bad activities by the criminals. The officer insisted that they should not record it.

Sabi ko, I'd rather tweet this to the PNP. "Ano'ng tweet?" he asked, I explained that the PNP has a twitter account. I'd rather report there than travel again to QC especially that it's midnight now. PNP bureaucratism minsan, tamad lang sila mag record, tapos sabihin "we serve and protect."

Norman, made this observation.

This morning I am happy to see that the PNP replied to my tweet-report, better and more transparent than blotter report in a city police station. 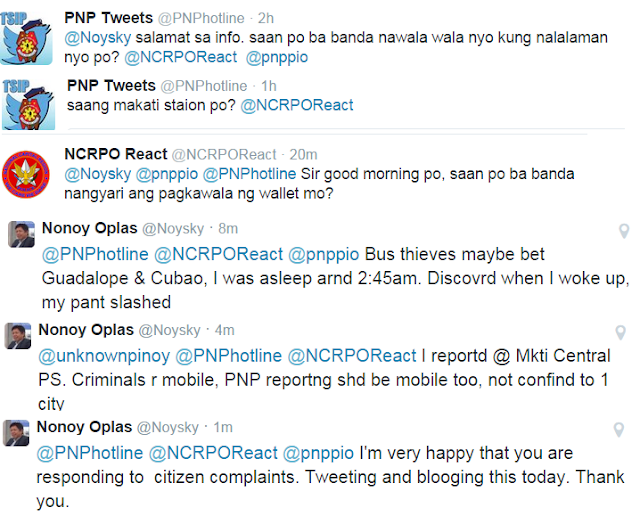 I think the PNP national and regional offices are trying to be responsive to citizens online reports and complaints. 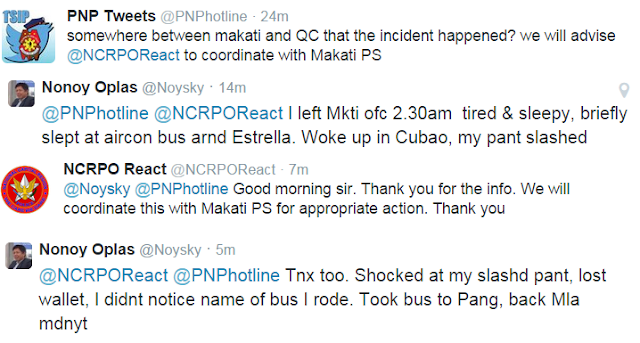 To my friends who liked, commented in fb, thank you all. Yes, am happy that I was not harmed. If I woke up while he/they were slashing my pant and if I reacted adversely, he/they might have stabbed me, and that's a bigger problem.
Posted by Bienvenido Oplas Jr at 9:39 AM