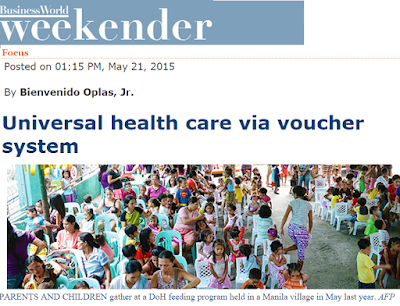 * This is my article yesterday in BWorld.

THERE ARE MANY claims and complaints that (a) the health condition of Filipinos is “deteriorating” because of rising inequality, and (b) because government health spending is not big enough. Thus, the goal of universal health care (UHC) for Filipinos will remain an illusion.

Are these statements true and correct? Two charts below will provide some answers to these questions above. 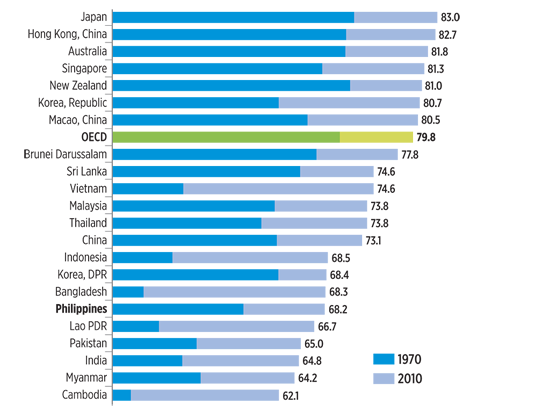 On May 14, 2015, I attended the Department of Health (DoH) consultation with civil society organizations, on the proposed DoH 2016 budget. This chart was among those presented by the DoH. Its budget has been increasing rather fast, rising by almost P10 billion a year from 2010 to 2013, then by around P18 billion a year from 2014 to the proposed 2016 budget. (see Figure 2) 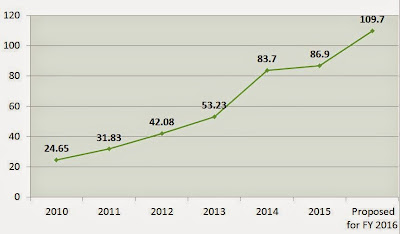 DOH BUDGET
Only the Department of Social Welfare and Development (DSWD) has a comparative huge jump in the annual budget as the DoH, because of the expansion of the conditional cash transfer (CCT) program. The big annual increase in DoH budget is also tied to the CCT program as the DoH has significantly expanded PhilHealth coverage and subsidy to the poor, particularly those who are CCT beneficiaries. So it is a DSWD-DoH “tag team” that has been given high priority by Aquino administration.

The huge increase in the proposed 2016 DoH budget is mainly to increase the MOOE by P11.75 billion, and it is targeted to finance expansions in (a) Subsidy for health insurance premium payments of indigents and senior citizens, P6.72 billion, and (b) Implementation of the Doctors to the Barrios and Rural Health Practice Program, hiring of UHC implementers, P2.83 billion. (see Figure 3)

Going back to the two questions above, (a) are Filipinos’ health conditions deteriorating, and (b) is government health spending not big enough?

No to both questions. The fact that Filipinos’ life expectancy keeps rising means that less people are dying in each age bracket. They live and work longer on average than their parents and grandparents.

Note also that Figure 2 shows only increases in the DoH budget. Other agencies and departments also have rising health spending, like the following: (a) Philippine General Hospital (PGH) which is under the UP budget; (b) AFP and Veterans Hospitals, which are under the DND budget; (c) PNP Hospital which is under the DILG budget, and so on.

Furthermore, almost all provinces and big cities have their own provincial or city hospitals. The luckiest of them all is the city of Manila: it has six city-owned hospitals, three DoH hospitals and the UP PGH. Ten government hospitals in one city, four national and six local, while some cities do not even have a single hospital. So when people talk about “health inequality,” government itself is a major contributor to it.

The voices of “more public health spending” never die out, they even rise every year. But is government direct provision of health care the most appropriate way to achieve UHC?

HEALTH VOUCHER SYSTEM
Here is a counter-offer. The DoH will still get huge money from taxpayers and Congress. It will still be the lead national agency in ensuring UHC. But there will be some difference in these mechanisms.

Two, DoH will be giving health vouchers to all households nationwide, rich and poor alike as all households are taxpayers, whether via direct income taxation or indirect consumption taxation (VAT, excise tax on fuel, etc.). Say a flat rate of P15,000 per person per year, regardless of age. So a household with four members (parents + 2 kids) will get a P60,000 health voucher per year. The household can buy a private health insurance, HMO or hospital, that will take care of them for one year based on certain health packages, including the annual general checkup.

Lousy and insensitive insurance firms will lose customers and go bankrupt. Competition among players and vouchers for the poor that are as good as cash will empower them, and arrogant insurance firms cannot easily disrespect them. Richer households who want bigger insurance coverage will simply buy a higher annual package and they just pay the balance between the higher cost minus the vouchers issued by the DoH.

Three, if none of the family members gets sick for the year, the balance between the value of voucher minus the cost of annual general check-up can be converted into cash by the household.

This is important. Why? The households will have the incentives to take good care of their bodies. Young kids can tell their parents like “Papa/Mama, please do not smoke or drink too much, so you don’t get sick often, so we can have extra cash at the end of the year, then you can buy us more food or more clothes and toys.” 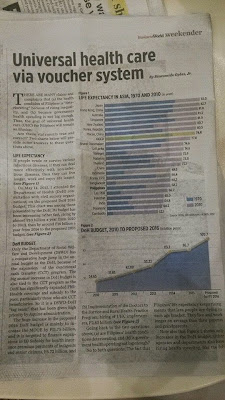 At the moment, people are “rewarded” with government subsidies if they get terribly sick and hospitalized . If they do not get sick for one whole year, they do not get any subsidy despite the huge tax money at the DoH and its various hospitals, national and regional offices yearly.

The voucher system with redeemable cash reverses the incentives system. If people get sick, they can still be covered by the health voucher; but if they take good care of their health and do not get sick, they can have cash at the end of the year.

This is a win-win situation for both the DoH and the public. The DoH will still get its huge annual budget including its share from the huge sin tax, the public will get the money via health insurance and/or redeemable cash.

See also: BWorld 1, PH Economy and Politics, Is there a Disconnection? April 24, 2015
BWorld 2, Benefits of Trade Liberalization for the Philippines, May 16, 2015