On Taking Photos of Government Personnel and MAPSA

Last Tuesday morning, I saw vans being apprehended by some Makati Public Safety Authority (MAPSA) officers behind Phil. Axa Life building in Malugay St. Makati city. I took some photos with my mobile phone of those apprehended vans and some MAPSA officers issuing tickets to the drivers of the vans. 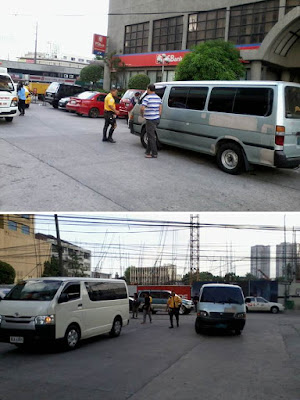 Then one MAPSA officer, Rizaldo O. Capricho, came to me and prevented me from walking further and asked why I took photos, adding that I have no right to take his photos without his permission. I said that if he does not like being photographed, I can delete the photos in front of him. He said No, I should not delete and I should go with him to the Makati Central Police Station (CPS), about 200 meters away. I said he was harassing me, preventing me from going to my destination, he said No, and that I must explain myself to the police station. Then he called his fellow MAPSA officer to ask for a policeman to come. I tried to walk further but he would block me.  Clear harassment.

Later, Police Officer Ramirez came and suggested that I must go with Capricho to Makati CPS. I said fine, but I must call first some lawyer friends. Ramirez said “sa presinto ka na magpaliwanag” and dragged me to a van, I think one of the apprehended vans. I got in, along with officer Capricho. While inside the van, I was able to talk to my friend, Atty. Jim Asuncion, he explained to me that taking photos of government personnel  is not a crime, I can file a counter charge later if I want.

Capricho has also calmed down. I explained that my purpose in taking photos is to share in social media government personnel who do good things or bad things.

The investigating Police Officer, Sergeant Alejandro, checked the photos in my camera, and I said you can delete those photos, and he did. Sergeant Alejandro then read to us the handwritten report he made, part of which said, “They also agreed to have no complaint each other…”,  which both of us signed. I did not want staying long in that police office and wanted to go to my office.

When I posted my story in my facebook wall, some lawyers friends pointed these abuses:

1. There is no existing  law prohibiting the public from taking photos of public officials and personnel in public places. Private citizens can claim right to privacy and sue for damages. But public personnel cannot claim such privacy right because they are expected to be under scrutiny all the time. The harassment by Capricho therefore, has no basis.

2. Under RA 7438, Article 286. “Grave coercions. - The penalty of arresto mayor…  shall be imposed upon any person who, without authority of law, shall, by means of violence, prevent another from doing something not prohibited by law, or compel him to do something against his will, whether it be right or wrong.” Capricho prevented me from going  to  my office, and Officer Ramirez dragged me to a van. I think officer Ramirez would deny that he dragged me, but I would not go to the Makati CPS if there was no pressure or coercion. I wanted to go to my office, not at the police station.

3. Same law, Section 2.  “Rights of Persons Arrested, Detained or Under Custodial Investigation, Duties of Public Officers. – (a) Any person arrested detained or under custodial investigation shall at all times be assisted by counsel.” I went to the Makati CPS without any counsel, because of the harassment by Capricho and Officer Ramirez.

4. I think PNP Makati officers are aware that there is no existing law that prohibits the people from taking photos of public officers in public places. In which case, they should have explained to  Capricho that there is no law violated, no cause for bringing me to the police station, but this did not happen.  One officer even reminded me that next time, I must ask permission first if I must get photos of government personnel. I think that upon seeing that the complainant was a MAPSA personnel, the PNP had sympathy with him even if I did not violate any law.

No detention as in being put behind bars, no handcuffs, and we were at the police station for maybe  20-25 minutes, then we got out. This thing therefore, may appear to be a “minor” issue. But as explained to me by some lawyer friends, those are serious coercion cases, illegal arrest, grave abuse of authority, serious human rights violations.

In the words of my lawyer-friend, “Everything you did was involuntary, from the moment they prevented you from going to work up to the time you signed a statement. All of it were under pressure. You might have the feeling that some acts were voluntary on your part, like deleting the pictures, but in fact they were not. You were asked to do something you otherwise would have not done if not for the threat of authority exerted upon you.”

Some friends advise me to file criminal or administrative charges against Capricho and Ramirez. But I recognize that it is cumbersome, time consuming and costly to file such charges. I don't have the energy and patience to pursue such option.

I just have to warn the  public because almost everyone now has a mobile phone, which has camera, and they take photos of anything that catches their attention. If they take photos of any public official, national or local, in a public place, they violate not a single law. So when another Capricho-type of officer comes to them and pressure them  to  delete the photos, or go with them to  a police station, these acts are NOT proper and constitute human  rights violation. Government personnel themselves who are supposed to  implement the laws become the law violators against citizens who commit no crime, no violation of any law.

You might still be able to undelete the deleted photos if you wish using undelete software such as Recuva or EaseUS Data Recovery Wizard.

Thanks rb. Nothing spectacular about those photos,almost similar as the photos shown here. I think Capricho panicked that someone was taking photos that included him. Honest people, especially public officers, usually do not mind being photographed as there is nothing to be scared of. It is usually the dishonest ones who tend to be paranoid being photographed.