There was a report in interaksyon.com last April 6, 2015 on  P15.5-billion coal-fired power plant in northern Negros proposed. For me, it is good news for the two Negros provinces and the Visayas grid.  When that 150 MW coal plant starts operating a few years from now, it should help expand electricity supply for Negros Occidental and Negros Oriental provinces which currently are dependent on an old geothermal plant in southern Negros and coal plants from Cebu.

In the May 2010 population census nationwide, Negros Occidental including Bacolod City has 2.9 million  people while Negros Oriental including Dumaguete City has 1.3 million, or a total of 4.2 million people for Negros island. The average annual  population growth rate of the two provinces from 2000-2010   are 2.1 percent for western or Occidental Negros and around 1.3 percent for  eastern Negros.

Assuming a similar population growth rate for 2010-2015, this means that this May 2015, the Occidental and Oriental provinces will have a projected population of 3.34 and 1.39 million respectively, or a total of 4.73 million, a big number of people.

Currently, the people in the two provinces experience occasional power fluctuations with isolated "Earth Hours". Bacolod alone is expanding fast with lots of big malls, commercial centers and big subdivisions. The Silay-Bacolod airport may soon become an international airport. Its electricity need will be huge with those many big bright lights to guide airplanes landing and taking off at nights, serve the passenger terminal which must expand too.

There are three renewable plants in Negros island. First, the Palinpinon geothermal plant in Valencia, Negros Oriental. It was commissioned in 1984 or 31 years ago, has an installed capacity of 192 MW. Old plants tend to suffer from frequent breakdown and low capacity factor. Energy Development Corp. (EDC) which bought Palinpinon from Napocor also commissioned a new, 49 MW geothermal plant in September 2014.

Second, there is a new solar power plant in San Carlos City, Negros Occidental, 22 MW and was commissioned only in May 2014. But solar plants have low average capacity factor (actual power generation over installed capacity), only around 20 percent. At night, output is zero and on cloudy days, output is small. Thus, on average, that solar plant can produce electricity by 4-5 MW only.

Third, there is a bioethanol power plant also in San Carlos City. But it is opposed by so many people because of the foul smell, reaching several kilometers away. The plant is using sugarcane bagasse. Even many priests who are pro-renewables oppose it.

In short, the two provinces are deficient in power. They need some for big, base-load (can run 24/7 non-stop) power plants. They currently buy power from coal plants in Cebu so that they will not have daily brown outs. 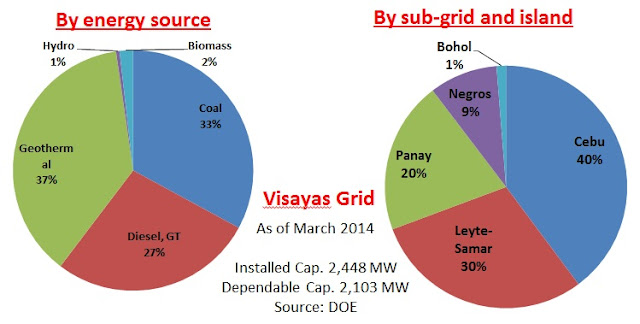 There is huge supply of geothermal power in the Visayas. In particular, 723 MW in Leyte and 192 MW in  Negros (Palinpinon), total of 915 MW. Some of the geothermal output of Leyte are sold to energy consumers in Bicol and southern Luzon.

Biomass including bioethanol have installed capacity of 44 MW while hydro provide another 11 MW.

Cebu, the industrial and commercial hub of the Visayas regions, is powered largely by coal and diesel power plants. Without these “non-renewable” energy sources, it is not possible for this central Visayas island and commercial center to sustain its business dynamism.

Figure 2. Visayas grid coal and oil-based power plants as of 2013. 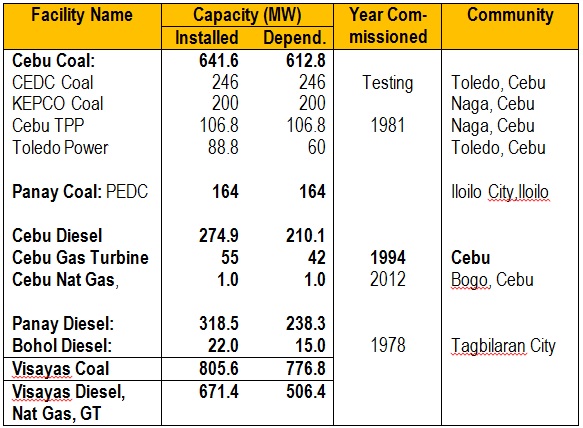 While many people in Cadiz City, Negros Occidental, the future site of this 150 MW and first coal power plant in the island, are happy with this new development, some sectors are not happy with this news. Their main concern is danger to public health because of coal soot pollution plus threats of “man-made” climate change.

Public health is a valid concern but very often, the fear of fictional monster of coal pollution is much larger than any real pollution. The anti-coal activists and campaigners, often influenced or hoodwinked by Greenpeace activists, are saying that communities that are close to the coal power plant are in danger of massive sickness if not deaths.

If there fear and worries are correct, then there should have been tens of thousands of massive sickness in the municipalities of Naga and Toledo in Cebu, the host of the four coal  power plants with a combined installed capacity of 642 MW or more than 4x the projected coal power plant in Cadiz City.

In addition, there should have been hundreds of thousands more of sick and  dying people in Luzon who live close to coal power plants. Like western Pangasinan with 1,294 MW;  eastern Quezon (Pagbilao and Mauban) with 1,275 MW; northern Bataan with 652 MW; northern Zambales with 630 MW; eastern Batangas with 600 MW, etc. These five provinces plus Pampanga and Bulacan that host smaller coal  plants have a combined installed capacity of 4,531 MW of coal power, or more than 30x the proposed coal plant in northern Negros. 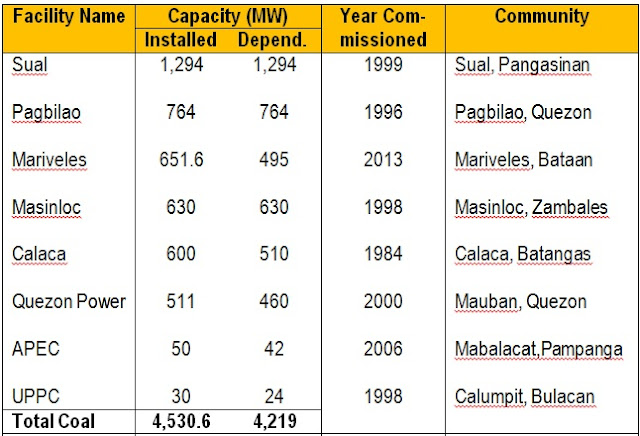 What can cause more harm and danger to people’s lives are the following: (1) frequent fires due to frequent use of candles or “gasera” when electricity is often absent; (2) frequent road accidents and crimes when streets are dark at night because electricity supply is unstable and the price is high; (3) various respiratory diseases because air-con or electric fans are often out due to  insufficient electricity supply, and (4) poverty and joblessness because manufacturing, industrial and commercial centers are few, because there is unstable and  expensive electricity.

As the Visayas provinces and the Philippine economy in general grow faster, the need for more stable and cheaper energy sources also rise. Coal and natural gas can provide such energy need. The renewables like solar and  wind can help but they are intermittent and unstable power sources. When the wind does not blow, when it is night time, their energy output is zero. They are also expensive, they require mandatory feed-in-tariff (FIT) and other subsidies, which means higher electricity bill for the consumers, to make them appear “viable” and "affordable".