The Economic Freedom Network (EFN) Asia and the Friedrich Naumann Foundation for Freedom (FNF) will participate once again in the big annual international conference in Korea, the (10th) Jeju Forum for Peace and Prosperity, May 20-22, 2015.

Although Jeju Forum was first organized in 2001, EFN Asia participated for the first time only in 2013 by having its own panel discussion, "Dealing with Economic Nationalism". I was part of the contingent, as Panel Rapporteur. Then EFN participated again last year, its panel discussion was about "Globalization and Inequality".

This year, the overall conference theme will be "Towards a New Asia of Trust and Harmony" and EFN's panel discussion will be on "Free Market and Environmentalism: Why They Should Love Each Other".

As the title suggests, the EFN session will look into ideas and movements that have promoted free market principles and schemes as the best way to conserve the environment.  Free market environmentalism can be a good way to address environmental degradation rather than direct government involvement. How?

Via clear property rights delineation and protection, which mitigates the ‘tragedy of the commons’ problem. A poor villager enters a non-guarded public forest land and cuts trees, big and small, that he can haul and transport. The land and the trees in it belong to everyone and no one in particular, so if he does not cut and get those trees today, someone else will cut them tomorrow or next week. And that is how many public forest lands in developing countries with weak rule of law and property rights protection, become bald and degraded.

The "meat" of Jeju Forum is the many simultaneous panel discussions that participants can choose to attend. Normally about six different topics are discussed, same time at six different discussion or meeting rooms.  The EFN panel will be on May 21, 3:40-5 pm.

The Panel Moderator will be Matthias Grabner of the Austrian Chamber of Commerce in S. Korea. Welcoming Remarks will be given by Rolf Mafael, German Ambassdor to S. Korea, and Siegfried Herzog, FNF Regional Director for Southeast and East Asia.

Keynote speech will be given by Dr. Oyun Sanjaasuren, President of the UN Environmental Assembly; Former Minister, Mongolia’s Ministry of Environment and Green Development; and currently the Chairperson of the Council of Asian Liberals and Democrats (CALD).

The panel Rapporteur will be Miklos Romandy, Regional Programme Coordinator for FNF Southeast and East Asia.

There are plenary sessions with some big name speakers, usually former heads of states. The following are among the plenary speakers, including luncheon or dinner speakers. 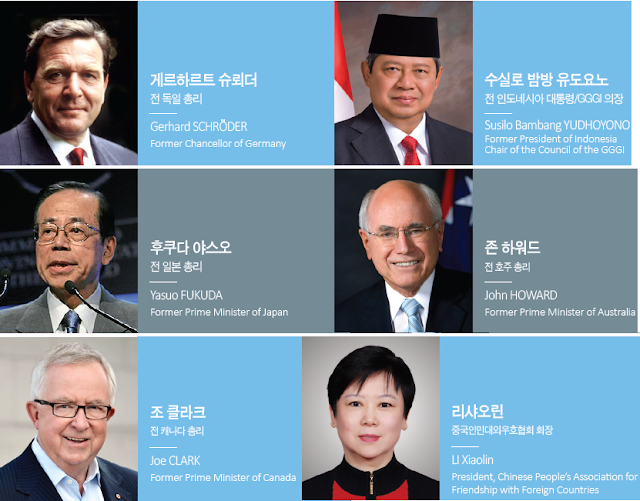 This year is the 70th anniversary of the end of World War 2. People now are busy talking about trade and investments, jobs and entrepreneurship, tourism and cultural exchanges, mobile phones and  other gadgets, and so on. Wars and invasion of other countries or territories are far out from their minds. Only current dictators, would-be-dictators, and lovers of more government coercion are talking about wars and invasions.

Peace and Prosperity. Around the world.

They are noble goals that responsible governments, industrious people and useful civil society organizations like EFN Asia and FNF  should continue to assert. The Jeju Forum is a good platform for such useful and productive discussions. I am happy that EFN continues its participation in this important annual international conference.
------------