IPR and Medicines 34, Another Forum on TPP and IP, Manila

On Monday, June 1, there will be a Discussion on "Trans-Pacific Partnership (TPP) to focus on Intellectual Property and Medicines" jointly sponsored by MAG, AGAP and IDEALS, 10am to 3pm at the Alliance of Progressive Labor (APL) office in Quezon City. Resource Speaker will be Dr. Burcu Kilic of Public Citizen, Global Access to Medicine Program. She is also a Legal Counsel at the American University, Washington College of Law.

I will attend it. I also asked the organizers if I can be a panel reactor, I just need an advance copy of her presentation or previous papers, then I can react/comment for 4-5 minutes after her presentation. "May not be" was the answer. Ok, but if  they want a wider discussion, some contrary opinions must be heard in a more prepared presentation.

1. The PH is NOT among the  invited countries in  the proposed TPP Agreement. Of the 10 ASEAN countries, only 4 were invited by the US -- Singapore Malaysia, Brunei and Vietnam. 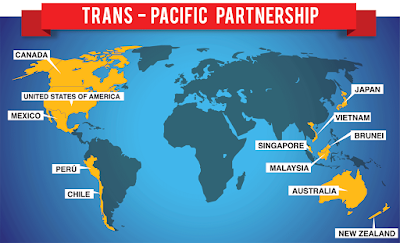 Notice also  that these other Pacific countries were not invited: Indonesia, Taiwan, Ecuador, Colombia, Panama, Costa Rica, Nicaragua, El Salvador, Honduras, Guatemala. China and Hong Kong should have been deliberately not invited by the US because they are, well, China.

2. Other Asian countries like the PH have expressed interest to join the TPP someday, but they are not priorities at the moment. The priorities are to consolidate the final, common agreement among original member-countries. There is no formal TPP Agreement yet.

3. A lot of the noise and opposition to TPP especially on IPR provisions seem to be based on "leaked documents". I myself seldom read the  official documents, partly because my advocacy -- and that of our free market allies  in  Asia -- is unilateral trade liberalization, not so much those costly and time-consuming regional and multilateral trade negotiations, and the PH is not part of this proposed agreement.

4. Medyo madami pang  kakaining kanin ang Pinas, the PH need to mature more before it can be admitted to the TPP. Like it must amend its constitution to allow more foreign investments and competition into the country. Under TPP, Jollibee, Chowking, SM, San Miguel, Metrobank,  Mercury, Unilab, other Filipino multinationals can easily invest in TPP member countries but those countries cannot easily bring  in their  companies to the PH because of our protectionist constitution.

5. Pharma IPR apply only to newly-invented medicines and vaccines, not to old ones. If people are happy with existing, off-patent medicines and vaccines because they are also disease-killers and are cheaper with many generics equivalent, IPR is a non-issue. The fear of "IPR and expensive medicines" apply only to a very small percentage of all medicines available in the market. Another fear, "IPR and limited/non-access to cheap medicines of developing countries" is an urban legend. As stated above, IPR protection does not apply to old, off-patent medicines, and these products comprise the majority of medicines in the  market. Up to 99 percent of the WHO's essential  medicines list (EML), if my memory is correct.

ere are so many smart mobile phones in the market that are also cute, wifi ready, have camera and radio and yet cheap. But if people want the latest models of iPone or Samsung, they should be prepared to pay more, and not cry or rally to "abrogate IPR of new iPhone and Samsung models" to make them cheaper.
-------------