China Watch 21, Is a War Between US and China "Inevitable"?

"War is inevitable" between the US and China. That is one headline used by a China government-owned newspaper, which was used and quoted by other national  and foreign media. 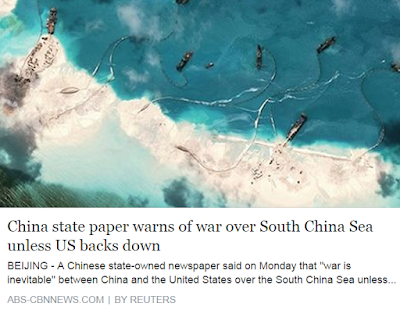 This exclusive report by the CNN has fanned such story.

I do not believe such  probability of course. It is s vintage 1960s headline that persists until today. US vs Russia, East vs West Europe, North vs. South Korea, China mainland vs. Taiwan, etc. 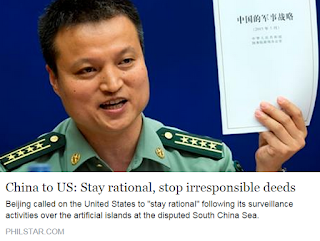 The more alarmism and panic created over the SCS/WPS territorial disputes, the easier for the public to say "Yes to more borrowings, more taxes to buy multi-billion dollars armaments, battle ships, jet fighters, etc." The point is to keep scaring the people,

"If you don't buy these armaments, your national territory will be diminished, your mainland will soon be grabbed. So give us your money and we will send you armaments to stop this from happening."

No different from climate alarmism. The UN, Al Gore, governments, WWF, etc. say, "Send us more money and we will save you and the planet from alarming, worrying, panicking, burning, submerging destructions." And that is how huge annual global climate junkets, multi-trillion dollars climate money, multi-billion dollars climate loans, thousands of climate bureaucracies, renewable energy cronyism, etc. were created. 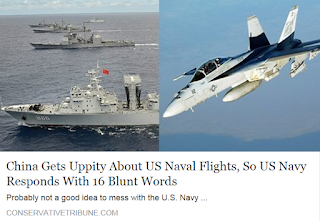 Keep the panic button alive, scare the public everyday, tell them that reason and diplomacy is inferior, only armaments and war mongering is superior. This works well for a commie government confronted with so many domestic problems, rebel regions (Tibet, HK, Taiwan, Uigur and other predominantly Muslim regions). By creating external enemies, real or imaginary, the commie government hopes to somehow sideline those internal problems and achieve national unity.
People are rational, they respond to incentives. If there is much to gain from absence of war, then war is NOT "inevitable". Despite sooo many war mongering and panicking stories since the 60s, there was NO global or regional war in the planet after WW2. Only invasions by militarist governments, like Russian invasion of Afghanistan, Iraq invasion of Kuwait, US invasion of Vietnam then Iraq, etc. 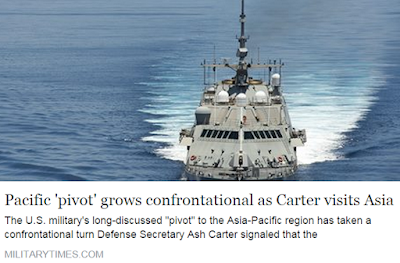 We have entered a period of global peace and rising prosperity for many decades now. Some people don't like it, so they invent war mongering, to create panic and alarmism. If people will not buy their alarmism, then like the well-headlined "US vs Russia", "West vs East Europe" etc , war is avoidable. War is stupid,

If we count the volume of investments and trade alone between US and China, that amount should be several times larger than any "projected gains after a war" scenarios. So many Chinese students, investors and visitors in the US, so many US investments, visitors to China and HK. But then again, I think some people derive pleasure and happiness that they can cause panic and alarm to the public and other governments.

Between 2000 and 2014, Chinese firms spent almost $46 billion on acquisitions and new establishments across America, much of it in the past five years alone. By the end of last year there were 1,583 establishments by Chinese firms across the U.S., according to the report.

Those pieces of info imply the following:

1. Many super-rich Chinese either have already left China, or one foot is still there but one foot is already in the US.

2. These rich Chinese still have voices and influence in the CCP leadership. I bet that many of them have relatives or family members in the party high echelon. Hence, they can influence the CCP via back channel.

3. And these rich Chinese in the US will also have some voices and influence in the US, through their US clients, suppliers and workers. Rationality will prevail.

The US will send an aircraft carrier, fly some recon planes, China makes some stern warnings, even some "near shooting" incidents, many media reports, repeat the cycle several times for several years,

At the end of the day, China will be forced to abandon those artificial islands as the gains for keeping them via real war are too small compared to what China currently enjoy in global trade, investments and tourism (both inflows and outflows) with zero war.

Another recent example -- the so much headlined "Russia invasion of Ukraine" many months ago. Thousands of headlines from many mainstream media outlets per month were coming out. ALL were false alarmism. There are so many avenues to pressure Russia and even Ukraine, from not going to war. The EU and US economic pressures were working. Russia lost a lot from "threats of war" alone, and it would lose more if it becomes "real war".

People know that there is much to gain from zero war.

I think that ultimately, China will abandon claiming territorial ownership of those shoals and artificial islands. The same way that Russia abandoned all those nukes and missiles stationed in Cuba, in Poland and East Germany, etc. China knows that it is creating more enemies than friends now, and since people are rational, they will soon realize their irrationality.

Comments from some friends:

1. Patrick: War is the health of the state.

2. Stephen:  For all the talk, the money people know they will lose billions if real war breaks out. Loud voices and even a few shots, perhaps a few lives, is not war. a precedent is the China/India relationship. Artillery fire. Gun shots. Taking of territory...testing then retreat. None is leading to war.

3. Malou: Ok lng kumita sa atin US if they can get China to abandon the territories under dispute.