I noticed today a big number of  news reports about the boat people from Bangladesh and Myanmar, the Rohingya people, landing or detained or turned away, by Thailand, Malaysia and Indonesia. Tens of thousands of people are taking the dangerous trip.

People will not leave in huge number if they are not prosecuted, physically and militarily. Either by a government, or by rival clans or religious groups that are backed or tolerated by government.

We have to reiterate for the nth time: the main purpose of government, its raison  d' etre, is to promulgate the rule of law, the law/s that protect the people's right to life against aggression, right to private property, and right to liberty and expression. If there is  government  failure in  this basic function, expect government failure in many other sectors and functions. 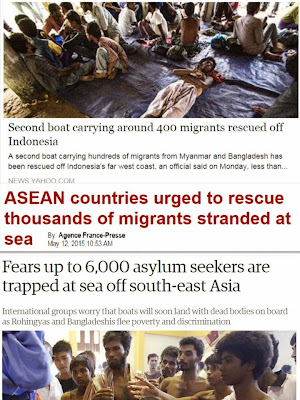 (1) Interaksyon, May 12
The International Organization for Migration called on Southeast Asian governments Tuesday to find and rescue thousands of migrants who are believed to be stranded at sea and at risk of death.

Campaigners fear as many as 8,000 migrants from Bangladesh and Myanmar -- among them many from the Rohingya minority -- are being held at sea with dwindling supplies after a Thai crackdown on trafficking curbed smuggling routes.

(2) The Guardian, May 12
International groups worry that boats will soon land with dead bodies on board as Rohingyas and Bangladeshis flee poverty and discrimination.


In the past three years attacks on the religious minority, numbering about 1.3m, have left up to 280 people dead and forced 140,000 from their homes. They live in crowded camps just outside the Rakhine state capital, Sittwe, where they have little access to school or adequate health care.... 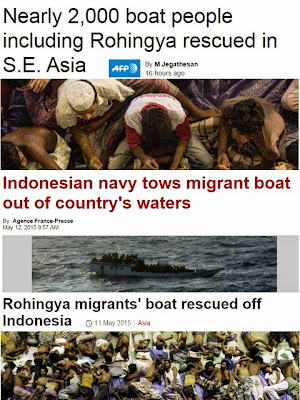 (3) Yahoo news, May 11
Nearly 2,000 boat people from Myanmar and Bangladesh have been rescued or swum to shore in Malaysia and Indonesia, authorities said Monday, warning that yet more desperate migrants could be in peril at sea.

The spate of arrivals comes as Thailand, a key stop on a Southeast Asian people-smuggling route, cracks down following the discovery of mass graves that has laid bare the extent of the thriving trade.

(4) Interaksyon, May 12
We gave them fuel and asked them to proceed. We are not forcing them to go to Malaysia nor Australia. That is not our business. Our business is they don't enter Indonesia because Indonesia is not the destination."

Another boat carrying an estimated 600 migrants from Myanmar and Bangladesh arrived in the north of Aceh, the westernmost province of Indonesia, at the weekend.

(5) BBC, May 11
Nearly 600 people believed to be Bangladeshis and Rohingya Muslims from Myanmar have been rescued from boats drifting in Indonesian waters.

At least two overcrowded boats - with many women and children on board - were towed by local fishermen to the shores of Aceh province on Sunday.

Myanmar - also known as Burma - refuses to recognise Rohingya as citizens. Hundreds of thousands have fled persecution in recent years, often through Thailand but also by sea. 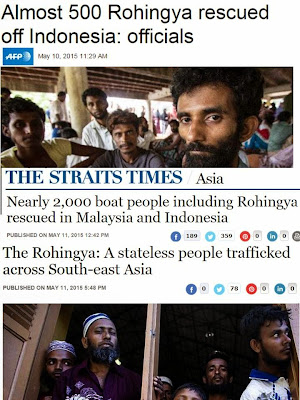 (6) Yahoo news, May 10
According to the migrant, five boats had departed from Myanmar last week to escape the conflict in their country, Darsa said.

"He said the Muslims were beaten and had hot water poured on them and they just wanted to get out of Myanmar as soon as possible, to anywhere where they could seek refuge," he said.

Buddhist-majority Myanmar views its population of roughly 800,000 Rohingya as illegal Bangladeshi immigrants, and they have been targeted in outbreaks of sectarian violence there in recent years, prompting many to flee.

(7) The Straits Times, May 11
Thousands of impoverished Muslim Rohingya – a minority unwanted by Myanmar’s government – and Bangladeshis have been braving a perilous sea and land trafficking route through Thailand and into Malaysia, Indonesia and beyond every year.

Malaysian police said people-smugglers had dumped more than 1,000 hungry migrants in shallow waters off the coast of the resort island of Langkawi since Sunday. “We think there were three boats that ferried 1,018 migrants,” said Langkawi deputy police chief Jamil Ahmed.

(8) The Straits Times, May 11
Why are they fleeing?
Fierce communal violence between Buddhists and Muslim Rohingya in Rakhine in 2012, which left some 200 dead and tens of thousands trapped in squalid camps - mainly Rohingya - catalysed the latest exodus.
The Rohingya have long been treated as "foreigners" by Myanmar's Buddhist majority.

"How many have left?
The UN refugee agency says well over 120,000 have fled since the 2012 violence, an exodus that is gathering pace.

The agency estimates 25,000 people from Myanmar and Bangladesh have taken to boats headed south in the first three months of this year alone.

An estimated 53,000 left in 2014, braving the sea crossing to southern Thailand with many headed for Malaysia and beyond. Hundreds die at sea every year.


One civil society, non-govt. response from our free marketer friends in Kuala Lumpur. Posted in fb two days ago by Wan Saiful Wan Jan of IDEAS:

We are building a private school for stateless and refugee kids. I am looking for volunteers with expertise in either similar kind of educational environment, or relevant expertise such as legal, HR, fundraising an financial admin to help at Board level. Anyone interested?

1. Haris Alimudin. Please come to Sabah, we are facing massive problem with stateless childs with no basic education, if the problem is unattended, soon we will face massive threat.

2. Wan Saiful Wan Jan. Thank you all for the overwhelming support. The location is in Pudu and you can see the preliminary work that we have done here www.ideasacademy.org.my . We now have 24 students. But we are moving into a new premise that can take up to 300 students so this is an ambitious project.
-------------

In the light of the persecution of Rohingya Muslims, Are Buddhists people Violent? what are these monks doing in the name of their religion?
https://www.youtube.com/watch?v=LeWEXyR70nU Do share to create awareness!

Hi, I think it's the Myanmar government, not the Buddhist people per se, who is violent against their Muslim citizens. The same way, it's the Muslim government (Shiite or Sunni or other ethnic groups) that is violent to others that do not belong to their ethnic camp, and not Muslims per se. Thank you.

The Philippine gov't must prioritize serving all Filipino citizens who don't have additional countries of citizenship, nor additional passport countries.