I don't understand what is really happening at the LTO, DOTC and Sec. Jun Abaya. You bring your car for the mandatory annual registration, (a) No car stickers, (b) No car plate available, And if you get a driver's license (DL), (c) No DL available, only a temporary paper license, and you pay P473 for it. 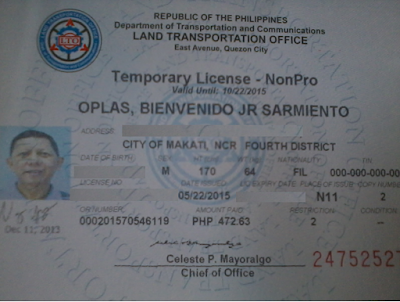 I covered my address, DL no., date of birth. When I asked one LTO officer when they will give that small laminated plastic DL, he said "mga 3-4 months po sir, balik kayo."
hayyy, dagdag abala naman yan pabalik ng LTO. 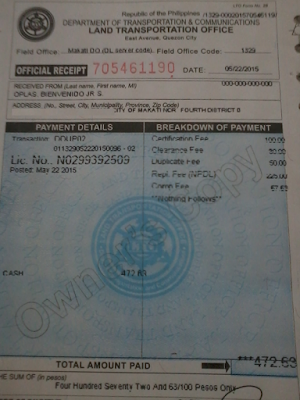 I asked them also when they will release the new car plate. Last month, they said "after 3-4 months" meaning by July or August. Yesterday, one staff said "mga August-September pa po sir."

In the private sector, there is often over-supply especially if the sector or sub-sector is under fierce competition. That is why there are many "eat all you can" restaurants, "buy 1 take 1" shops or "weekend madness sale" malls, cheap mobile phones, etc. Entrepreneurs and suppliers anticipate demand, so they supply a lot in advance.

In contrast in government, like LTO-DOTC, supply is far far behind. Notorious inefficiency, or outright competition for robbery among factions in some government agencies.

Plus slow MRT trains, often malfunctioning train air-con, despite the fare hikes. Plus crowded airports and things that are government-owned and operated. Good that buses and buslines are private. Otherwise, there would be shortage of buses, very crowded bus stations everyday.

I waited almost 2 hours at LTO Makati to get this temporary DL It was fast at the beginning, then slowed down later, especially in the picture taking and signature (window 4), then payment/cashier (window 7), then getting the temporary DL (window 5). 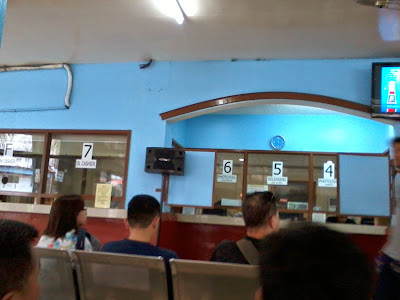 My original DL I lost to bus thieves last Wednesday who stole my wallet. A consolation that the LTO could have done, is to extend the expiry of the new DL that they will issue. My orig DL will expire in 2016. The temporary DL they issued will also expire in 2016. They could have made it May 2018 for a full 3 years DL. They did not do it, thinking that they will get more money from me and other driver's next year.

Comments from friends when I posted that temp. DL and my initial observations in  my fb wall. I did not ask permission from them to use their comments, so I am only giving their first names -- all are real people, not fictitious. Readers should focus on the ideas and sentiments, not the identity of people.

1. Bayani: they simply refuse to improve.

2. Manny: A simple agency to manage if only it is not a money-making machine for crooks! We need to privatize a lot of govt agencies and lessen govt intervention on our lives!!!

5. Waltzing: PDAF may budget ninanakaw. You paid all the fees. No ID?available?

7. Ricardo: This is the noynoy-brand of decay. Tuwid na daan indeed.
Abaya, de lima, et al are all running for senate in the hopes of gaining immunity from suit for the anomalies they did that will all surface after 2016.

8. John: They should break up DOTC, merge the transport units with DPWH and create a DICT. LTO should be merged with LTRFB. Remove developmental mandates from CAAP and PPA and make them purely regulatory agencies. Outsource or privatize everything that is not regulatory in function.

9. Leo: Jun Abaya has got to be the most incompetent DOTC Secretary in its history. Nearly all the major visible public-affecting problems, e.g., MRT, LTO, LTFRB, are in his department. And despite his gross incompetence he's still there, continuing to wreak major damage to the institution and the nation.

10. Casey: Registered two cars last February. No stickers, no plates, until today. That happens when incompetents appoint other incompetents.or criminals. Look what happened at MRT. Something that never happened in 40 years. A foreign company accused the MRT crook of extortion. A foreign ambassador even came to testify about it, something never seen before. And what happens? Nothing. A huge black mark.

They prosecute senators and even the VP for corruption, which is good, if they are guilty. But prima facie evidence about the MRT heist is swept under the rug. Not exactly the straight path. The only good thing is that next year they will probably all be taken out by someone who is more honest

11. Stephen: Ricardo,  I hear what you're saying. As I did some reading in media reports I learned that the company that has been making the drivers licenses was awarded the contract in the mid 1980s. I presume, but admit that I am unclear, that the contract was awarded under Pres. Marcos. It expired at the end of 5 years, but no previous administration did anything about getting a new contract. So LTO just kept paying the uncontracted vendor. It is only now, under this administration that a real contract is being achieved. Not surprisingly that is not an easy process.

Casey: If they cannot even contract licenses and plates, can they do anything useful?

Stephen:  I am as frustrated as anyone and agree with your view. According to media reporting, LTO wants to bring the production "in-house." This is causing problems - they say - to get the printing/production machines in each of their offices. And... I am told... to overcome 25 years of comfort with the way things have been done by every administration since the mid 1980's. I don’t condone the state of affairs but merely write what I hear and read.

Nonoy: One possibility, DOTC keeps paying the vendor then sues it for inability to deliver the goods, a clear breach of contract. DOTC gets even with money then get another contractor/s to supply all the backlog. DOTC shd be ashamed of these things happening.

Ricardo: LTO hasn't been paying the plate supplier for at least year

Stephen: If media reports are accurate, its more like 25 years. Thats about when the last contract expired and nobody did anything about getting a new one til now. They just kept paying the old vendor. Same story, by the way,with some other services and other agencies and 1980's era contracts.

14. Carlos: It's actually a simple task for them, I am quite puzzled why they screwed this up. Or maybe they should get those experts in Recto to produce the licenses

Nonoy:  If DOTC's hand is tied in an existing contract, it can sue the contractor for failure to deliver the (a) car stickers, (b) car plates, (c) driver's licenses. The inconvenience to the public -- asking ALL of them to call LTO or come back after x number of months, and come back again after the specified period, the image of incompetence of the PNoy administration, etc. are huge damages.

But I think Jun Abaya is part of all these incompetence or scam. The LP should remove him from DOTC quick -- if the party is serious in stamping out corruption and inefficiency within its ranks.

16. Francis: Abolish the LTO and DOTC. Let car registration and driving lisences be issued by vehicle vendors and insurance companies on the agreement that if someone they guarantee gets into an accident, the dealer or insurance company pays through the nose.

How many bad drivers have been certified by the LTO, DOTC? How many injuries and fatalities are they responsible for? Why are they not liable? Because they are government and government is magic.