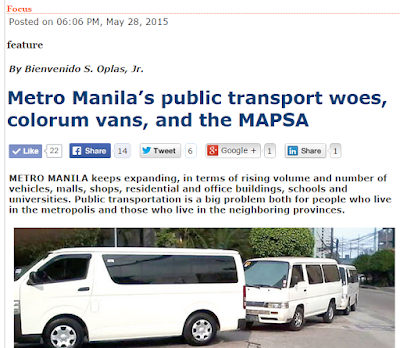 METRO MANILA keeps expanding, in terms of rising volume and number of vehicles, malls, shops, residential and office buildings, schools and universities. Public transportation is a big problem both for people who live in the metropolis and those who live in the neighboring provinces.

While there are thousands of buses and three MRT/LRT train network existing and more are being planned, plus the proposed introduction of the bus rapid transport (BRT), they are not sufficient.

And even assuming for the sake of argument that the BRT and extended MRT/LRT are already in place, people still have to take multiple rides to reach their destinations. In particular, those who live in Las Piñas-Parañaque or Fairview/QC areas.

Here is what they will go through if they take the public transport system, one-way.

(1) Ride tricycle from the village/subdivision to secondary or primary roads;
(2) Ride jeep or bus to MRT/LRT/BRT station;
(3) Ride train/BRT to Makati or Ortigas or Manila, endure getting squeezed inside the trains or buses;
(4) Ride jeepney or van to final destination.

Four rides from house to office one-way, or three rides if #1 or #2 is eliminated. Going back home, another three or four rides in reverse sequence. If one is wearing corporate attire, and/or carrying a laptop and important documents and big cash, would he leave the car at home and endure the above 6-8 rides a day, 5 days a week?

Some would say Yes, but many middle class and rich people would say No. And that is why many people bring their cars or motorcycles everyday and endure the traffic congestion, limited and expensive parking, just to maintain their poise, or at least not be exposed to bus holdups and snatching in the streets.

And this makes public transportation very inconvenient, costly, and time-consuming. Riding a tricycle alone in formal or corporate attire looks unglamorous. And it is worse during the rainy season. The combined fare of those 6-8 rides a day would be equivalent to, if not higher than, buying fuel for the car. And that is why a “carless city” -- the next pioneering idea of city-living that is now the aspiration in Europe -- seems a far-out vision.

Another proposal made by various sectors is to have more bike lanes and encourage people to ride bicycles. It looks and sounds fine, but not everyone is physically fit to ride a bicycle. Or people are not willing to endure direct sunlight and smoke pollution from jeepneys and buses, or endure the rains and floods during the wet season.

There is an existing alternative to (a) multiple rides a day, (b) driving one’s car or motorcycle, and (c) riding bicycles -- the air-con vans.

They ferry passengers from residential areas to different destinations, particularly Makati, Manila, Ortigas, Fort Bonifacio, and other major commercial and business districts (CBDs). With just one ride, at most two, instead of three or four rides.

‘COLORUM’
One problem here is that getting a franchise for legal operation is very bureaucratic and costly. A friend who operates and drives a van told me that a franchise legally should be less than P50,000 total. But with bureaucratic procedures, it goes up to P200,000 to P300,000 per unit.

Check out, for instance, an online store of van franchises here.

With such high cost of getting a franchise, many van operators resort to the illegal operation known as “colorum.”

The same friend of mine who used to drive a colorum van for several years but now legal, told me the following, based on his experience.

One, for “colorum” operators, savings from getting a legal franchise is reserved as bribes to certain traffic enforcers. He said that the highest bribe he paid a few years ago was P1,500 for a first offense. Drivers avoid apprehension but sometimes they like to be apprehended because they get to befriend the authority. Next time they will not be apprehended. But traffic officers need some “karinyo,” token gifts like a bottle of alcohol worth P300-500 on their birthdays.

And three, with the higher P200,000 fine for the colorum vans, bribes are now said to range between P3,000 and P6,000, or even more for a first-time offense. But if it’s a joint operation by those assorted enforcers with the media in tow, then, no mercy, the P200,000 fine will be slapped.

My office is on Buendia Avenue, Makati City, not far from the Ayala intersection. Every morning on weekdays, I see white vans unloading passengers in front of a building where I know a former senator lives.

These passengers would then walk to Ayala or Buendia, although some would ride a jeepney heading toward Ayala. I would assume that many of these vans are considered “colorum.”

While these vans were mostly tolerated in previous months, I noticed that over the past two weeks, there were frequent, sometimes daily, apprehensions by officers identified with the Makati Public Safety Authority (MAPSA) who would then issue tickets to these drivers.

Last Tuesday, May 26, I took photos of some of these MAPSA officers as they were issuing tickets to the van drivers. One officer, Rizaldo Capricho, did not like it, and soon he approached me and started arguing with me, saying I had no right to take photos of them without their permission. A Makati policeman dragged me to a van and I was brought to the Makati central police station.

There is no law in the country prohibiting people from taking photos of public officers in public places. There was no cause or justification for bringing me to the Makati CPS, and yet I was there. They could not file any charge against me, so I was out after about 25 minutes.

While it is the DoTC’s LTFRB policies that must be changed, to encourage and not restrict the expansion of legal air-con vans by reducing the cost and time of getting a franchise, I think LGU offices like MAPSA should be more considerate of those vans. They make no crimes, they render public service by bringing passengers to their destinations in just one or two rides, instead of the punishing three to four rides. The passengers are employees or clients of banks and other offices in Makati who pay various taxes and fees every year to the city government. These passengers are the very people who man the engine that is the Philippine economy.

To help address the daily traffic congestion and inconvenient public transportation system in Metro Manila, the DoTC’s LTFRB and LTO, the MMDA and the various city governments should learn to step back from often high-handed and bureaucratic procedures in giving legal permits to enterprises like air-con vans. Less cars on the roads, less harassed passengers mean higher work productivity and longer work hours. Which are translated to more economic activities, more job creation for the people of Metro Manila. The various national and local government offices also benefit in the form of higher business tax revenues.
-------------