(This is the continuation of my notes on the DOH consultation meeting with consumers and civil society groups on rational use of medicines (RUM), see RUM 1: Reducing Medicine Abuse which I posted last January 25.)

Ms. Marianne Dioso, also of NCPAM, presented the SARAH approach in the PMP: 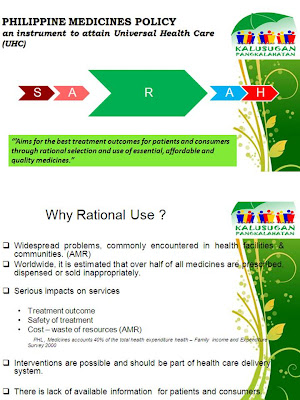 Safety and effectivity of medicines,
Affordable and accessible,
Rational use of medicines,
Accountability and transparency of health players, and
Healthcare systems that are adequate.

She started with a quote from Dr. Alran Bengzon, a former DOH Secretary, saying that drugs and medicines are the key component of the Philippine healthcare system. Then showed these data: 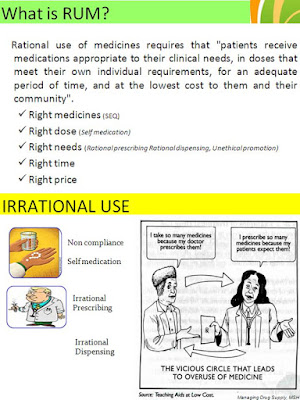 It is true that there is both demand and supply of high medicine use, from both the patients and physicians, but not in all cases. Some patients and physicians emphasize preventive healthcare like having the proper and nutritious diet and non-sedentary lifestyle, to take medicines only when really necessary, like when the disease is spreading fast.

The FDA is monitoring not only good manufacturing practices (GMP), but also good storage (GSP) and good distribution practices (GDP). There is also the "generics only" prescription policy in the public sector, covering physicians in government hospitals and clinics. And FDA will have a "generics fast lane" to fast track the entry of more new generic players. 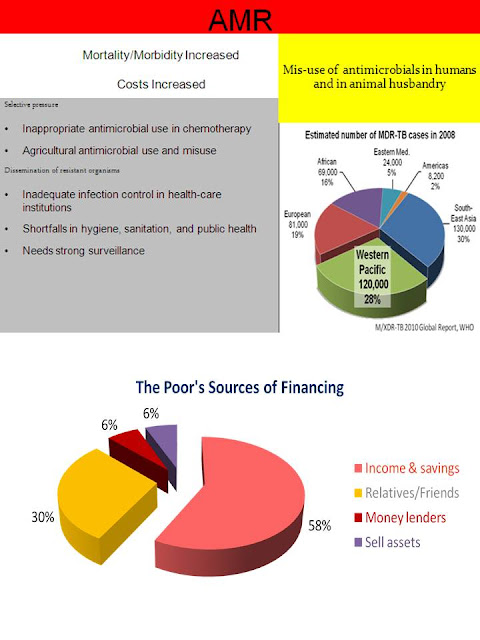 
So, why the need to promote RUM?
- problems with AMR
- worldwide, over half of all medicines are not appropriately used and dispensed, resulting in wastes if not adverse result to patients
- irrational use and abuse include: (a) non compliance with the treatment, (b) self medication, (c) misuse of anti-microbial among humans and animals, (d) penicillin resistance, about 82.5 percent prevalence rate in the Philippines.

This is the RUM framework that the DOH is planning to issue a new Administrative Order.It looks convoluted and bureaucratic to me. 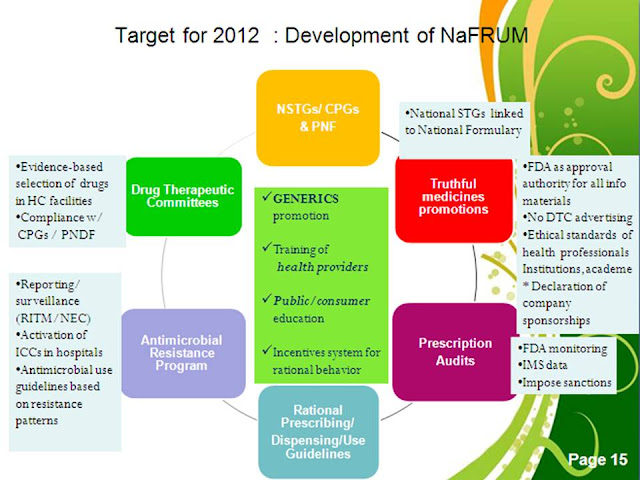 I also questioned the quote from Dr. Alran Bengzon (don't know when he said that) saying that medicines are the major component in healthcare. I have 3 examples.

a. My own experience when I suffered food poisoning last month and went to the hospital ER for treatment, medicine cost was only 10.5 percent of total costs, see  Drug Price Control 22: Comparing Prices of Drugs, Diagnostic Tests, PFs.

c. And the son (2 years old) of my sister's staff who was also hospitalized last month, the medicines constituted only 9.7 percent of the total hospital bill, see  PhilHealth Watch 11: Hospital Bill Deductions (b).

Then I narrated the case of my friend and former classmate from UP, we're of same age, but he's relatively fat, has hypertension and other diseases, he is taking 16 different tablets in the morning and 9 in the evening, a total of 25 different tablets per day! He said that if he skips some of those drugs, he would be trembling sometimes. I told him that I take zero medication, not even vitamins and food supplement. When I get sick, like my recent food poisoning last December due to over-eating (Lifestyle Diseases 9: Overeating and Food Poisoning), then I take medicines. When I get well, I stop taking any medicine, I just focus on taking healthy food, or even "non healthy" food and drinks like my favorite serbesa :-). But I compensate it by having a relatively active lifestyle, like walking about 2 kms a day on average.

On regulating the promotion and advertising of medicines, food supplements, skin whiteners and other pharmaceutical products, I think it will be a tough job because many ads are done not via traditional media but through posters in small sari-sari stores, etc. I narrated a poster I saw, a coffee that can cure several dozen types of diseases including cancer! See  IPR and Medicines 19: Miracle Anti-Cancer Drug?.

The facilitator that afternoon to get the consumer groups-participants' feedback was Dr. Isidro Sia, another faculty member of the UPCM-PGH. He's a cool guy. On drugs promotion, he mentioned the advertising of pain reliever Alaxan FR -- heavily promoted in tv and radio because the endorser is the most famous Filipino in the planet, boxer-Congressman Manny Pacquiao. This drug is a combination of paracetamol + ibuprofen molecules. Dr. Sia said that this drug should NOT be taken on empty stomach because it can irritate the stomach (in  Filipino, "sisikmurain") and some internal organs and can lead to adverse health effects. But the tv and radio ads do not give this kind of caution, people just take that drug because it is so heavily advertised. Doc Delen even asked, "Is it advisable in the first place to combine paracetamol + ibuprofen?" I don't know the answer to that, I heard it well because I was seated next to her :-)

These two slides, part of Ms. Dioso's annex presentation, would help discuss the issues of high use of over the counter (OTC) drugs, brand mentality (or even endorser mentality), and inappropriate ads and use of drugs. 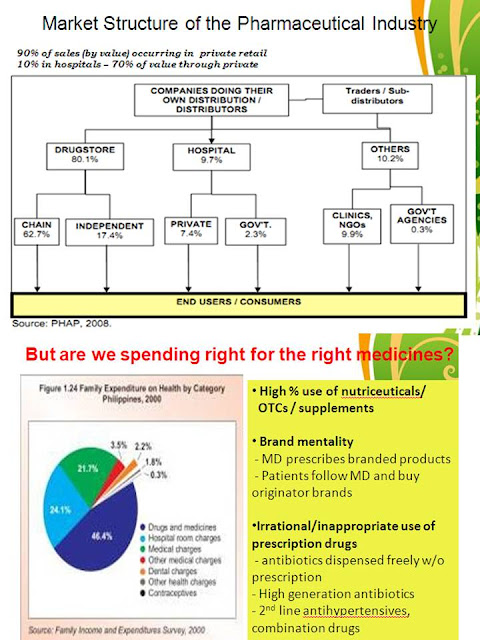 The the form of possible interventions and actions by all of the above players and influencers, especially the CSOs, were identified.

Former Gov. Obet Pagdanganan suggested the role of comics/komiks in many if not all barangays  nationwide for this kind of educational program teaching people not to take medicines irrationally.

Another suggestion is to talk to the Philippine Board (or Council, etc.) of Advertisers, to require truthful advertising of medicines, food supplement and other pharmaceutical products. Also to link up with the Philippine Pharmacists Association (PPhA), the Philippine Medical Association (PMA), to campaign for RUM in drug prescription and dispensing. There were several other suggestions. On my part, I suggested that if we have websites and blogs, we can write and discuss these matters (like this article) as many middle to upper class Filipinos are readily linked to the web these days.

Dr. Art Catli, formerly with PMA now with PHAP, mentioned that while physicians can prescribe a particular medicine, its right use and right dosage, they have no control once the patients have left the clinic or the hospital. The latter can disobey and get the suggestions of the drugstore pharmacists and clerks, or listen to what their friends, neighbors and family members, or what the tv and radios say for drug substitution like getting the cheaper brands, or disobey the dosage and frequency of taking the medicines, etc.

There was an interesting discussion on how different drugstores respond to consumers. In the case of Botika Binhi, an NGO drugstore in several municipalities in the country, they narrated that if a patient comes to them and asks for medicines for sick babies and infants, they advice the patients to bring the child to the doctor first and get a prescription, they do not sell any medicine right away. If the consumer is an adult and asks for a medicine without prescription, they can suggest a particular drug with a caution that "If your condition does not improve within one day, better see a physician before you continue the medicines."

I like their philosophy and practice. I narrated also that last December, when my 1+ year old daughter has a cough while we were still in Iloilo City, I went to a Mercury Drugstore in Lapaz outlet and asked the clerk any brand of  carbocistein for babies. The lady asked, "how many days the baby has cough? If more than 3 days, we don't sell any medicine, bring your baby to a doctor first." I nodded and smiled at that lady. Sensing an "experiment", I went to a competing drugstore right in front of it, I forgot its name, I think EVZ Pharmacy, not sure. When I asked for carbocistein for babies, the lady immediately suggested Solmux and about two other brands and gave their prices, meaning they will sell even without asking for the condition of the patient or asking for any prescription.

About BnB, I commented that being government and DOH-created, they are exempted from certain regulations that the DOH and FDA themselves have set. Like a drugstore should have a licensed pharmacist (or at least a pharmacy-trained clerk?). Private drugstores when violating this provision can be closed down by the FDA but BnBs are allowed to continue. I heard of a story of a pharmacist whose name is used by some 200+ BnBs and Botika ng Bayan (BNB) as their pharmacist, without her knowledge.

I think the best campaign that the DOH can launch is preventive healthcare, not curative, like promoting drug dependence via generics. One way to do this aside from the usual public education campaign, is for the DOH to focus its resources on infectious and communicable diseases, pediatric diseases, and spend less on battling NCDs as the latter can be a "bottomless pit" in terms of health spending. If someone has lung or throat cancer due to over-smoking, or diabetes and hypertension due to over-eating fatty and unhealthy food, should government, via the DOH hospitals, LGU hospitals, UP-PGH and other state universities' medical centers and hospitals, pay high and repeated subsidies for these patients? People can buy private health insurance to augment their PhilHealth claims should they need hospitalization.

RUM 3 will be my additional notes and comments to the presentations as well as RUM itself. I should produce it in the next few days.
Posted by Bienvenido Oplas Jr at 5:00 PM