One of the climate tricks by the anthropogenic global warming (AGW) proponents is to almost totally ignore the role of the Sun on our climate. Thus, they do not pay any attention to solar activities as measured by total solar irradiance (TSI), geomagnetic field or the Ap index, and neutron count, among others.

Here are two recent papers by Australian geologist David Archibald, both posted in http://wattsupwiththat.com. Dr. Archibald is saying that as the current solar cycle 24 (one solar cycle is 11 years on average, some are shorter, some are longer) is projected to be long, probably 18 years. Longer time for the Sun to ramp up, global cooling happens and is extended.

I added a 3rd paper from http://notrickszone.com/ by Pierre Gosselin, more peer reviewed papers are coming out saying "It's the Sun, Stupid".

So even if each person on the planet will be riding a car and the number of SUVs will double to its current number, global cooling will still happen. So what's the fuss about all those UN and government efforts to "fight global warming and climate change" and "save the planet"?
-----------


(1) Solar Cycle 24 Length and Its Consequences

Posted on January 8, 2012 by Anthony Watts
Guest post by David Archibald
Solar Cycle 24 is now three years old and predictions of the date of solar maximum have settled upon mid-2013. For example, Jan Janssens has produced this graph predicting the month of maximum in mid-2013, which is 54 months after the Solar Cycle 23/24 minimum in December 2008:

For those of us who wish to predict climate, the most important solar cycle attribute is solar cycle length. Most of the curve-fitting exercises such as NASA’s place the next minimum between 2020 and 2022 (eg: http://wattsupwiththat.com/2011/11/06/nasas-november-solar-prediction/). Solar minimum in December 2022 would make Solar Cycle 24 fourteen years long, which in turn would make the climate of the mid-latitudes over Solar Cycle 25 about 1.0°C colder than the climate over Solar Cycle 24. 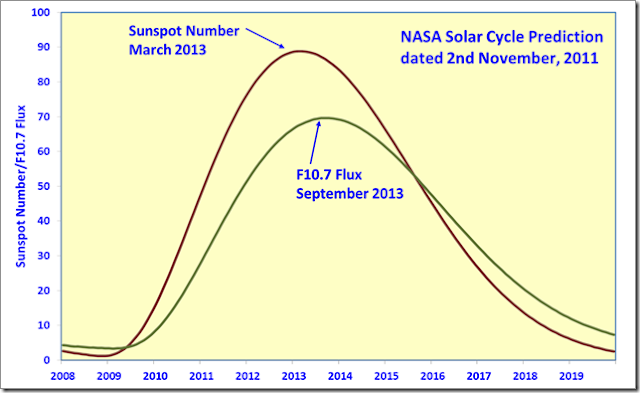 Curve-fitting leaves a lot to be desired. Even late in the progression of Solar Cycle 23, the curve fitters in NASA had poor predictive ability.
Examination of Altrock’s green corona emissions plot from mid-2011 suggests that a new predictive tool is available to us. The original is available here:

http://www.boulder.swri.edu/~deforest/SPD-sunspot-release/6_altrock_rttp.pdf
This is my annotated version:

Altrock had observed that solar maximum occurs when the “rush to the poles” reaches 76°. The magnetic poles of the Sun reverse at solar maximum, which is also considered to be the beginning of the new extended solar cycle.
We also observe that solar minimum for the last four minima has occurred when emissions are exhausted at 10°. The latitude of 10° is shown as the red line on the diagramme. Further to that, the last two solar cycles show that the month of minimum can be predicted by drawing a line between solar maximum (the point at which the rush to the poles intersects 76°) and the point of exhaustion at 10°. The bulk of activity is bounded by this line.
Altrock has noted that the “rush to the poles” in Solar Cycle 24 is much weaker and much slower than in previous solar cycles. The line he has drawn intersects 76° in mid-2013, consistent with other predictions of Solar Cycle 24 maximum.
The shape of the emission regions also suggests that Solar Cycle 24 will be quite extended. The blue bounding line from the Solar Cycle 23 maximum intersects 10° latitude in 2026, making Solar Cycle 24 eighteen years long.
That would be an exceptionally long solar cycle. The most recent cycle that neared that length was the seventeen years from the maximum of Solar Cycle 4 to the maximum of Solar Cycle 5. Prior to that, the Maunder Minimum had some very long solar cycles as interpreted from C14 data:

It seems that the first solar cycle of the Maunder Minimum was also eighteen years long.
An eighteen year long Solar Cycle 24 would be very significant in that it would be five and a half years longer that Solar Cycle 23. With the solar cycle length/temperature relationship for the US-Canadian border being 0.7°C for each year of solar cycle length, a further cooling of 3.8°C is in train for next decade. The evolution of Altrock’s green corona emissions diagramme as a predictive tool will be followed with some interest.
Back to the subject of curve-fitting, it may be still too early to call Solar Cycle 24 using that technique. The following graph shows the raw monthly data for sunspot number amplitude for Solar Cycles 5 and 6 (the Dalton Minimum) with Solar Cycle 24 to date aligned on the month of minimum. Solar Cycle 5 took about four years to get going before it had a sudden burst, and then died off over the following ten years. It is still a bit too early to be certain about how Solar Cycle 24 will shape up.

And here's the 2nd article by Dr. Archibald.

Figure 1: Ap Index 1932 – 2012
The Ap Index is the weakest of the solar activity indicators and has returned below the floor value of solar minima over the last 80 years – the green line in the chart above.

Figure 2: Solar Cycles 20 and 24 Ap Index and Neutron Count
The last time there was a cooling event in the modern instrument record was during Solar Cycle 20. Aligned on the month of minimum, Figure 2 shows that while the Ap Index and neutron count are co-incident to date in Solar Cycle 24, they were quite divergent over two thirds of Solar Cycle 20.

Figure 3: Neutron Counts over Solar Cycles 20 to 24
One big difference between Solar Cycle 20 and the other solar cycles of the modern instrument record is that just over half way through the cycle, the neutron count returned to levels of solar minima and remained there for the balance of the cycle. That is shown in Figure 3 above which also shows that the neutron count of Solar Cycle 24 is yet to depart from levels associated with previous minima, three years into the solar cycle.
Further to the post on Solar Cycle 24 length based on Altrock’s green corona diagram at:
http://wattsupwiththat.com/2012/01/08/solar-cycle-24-length-and-its-consequences/, Altrock noted the slow progress of Solar Cycle 24 in mid-2011. From Altrock, R.C., 2010, “The Progress of Solar Cycle 24 at High Latitudes”:
“Cycle 24 began its migration at a rate 40% slower than the previous two solar cycles, thus indicating the possibility of a peculiar cycle. However, the onset of the “Rush to the Poles” of polar crown prominences and their associated coronal emission, which has been a precursor to solar maximum in recent cycles (cf. Altrock 2003), has just been identified in the northern hemisphere. Peculiarly, this “rush” is leisurely, at only 50% of the rate in the previous two cycles.”
Altrock’s green corona diagram is available here:http://www.boulder.swri.edu/~deforest/SPD-sunspot-release/6_altrock_rttp.pdf
If Solar Cycle 24 is progressing at 60% of the rate of the previous two cycles, which averaged ten years long, then it is likely to be 16.6 years long. Using that figure of 16.6 years would make Solar Cycle 24 seven years longer than Solar Cycle 22. Using a solar cycle length – temperature relationship for the US – Canadian border of 0.7°C per year of solar cycle length, a total temperature decline of 4.9°C is predicted over a period of about twenty years.
Has a fall of that magnitude happened in that time frame happened in the past? A good place to look is the Dye 3 temperature record from the Greenland Plateau, available here:ftp://ftp.ncdc.noaa.gov/pub/data/paleo/icecore/greenland/gisp/dye3/dye3-1yr.txt

Figure 4: Dye 3 Temperature Record from Oxygen Isotope Ratios
There is plenty of noise in this record and rapid swings in temperature, for example the 5.2°C fall from 526 to 531 at the beginning of the Dark Ages.

Figure 5: Dye 3 Temperature Record 22 Year Smoothed
Averaging the Dye 3 temperature record using the 22 year length of the Hale Cycle produces a lot of detail. What is evident is that there has been a very disciplined temperature decline over the last four thousand years. The whole temperature record is bounded by two parallel lines with a downslope of 0.3°C per thousand years. The fact that no cooling event took the Dye 3 temperature below the lower bounding green line over nearly four thousand years is quite remarkable. It implies that solar events do not exceed a particular combination of frequency and amplitude. From that it can be derived that this particular combination of frequency and amplitude with be ongoing – that is that cooling events will happen just as frequently as they did during the Dye 3 record.

Figure 6: North – South Transect through the Grain Belt
The relationship between temperature and growing conditions at about the latitude of the US – Canadian border is that one degree C will shift growing conditions by about 140 km. With a total 4.9°C temperature decline in train, that means a shift of about 700 km. Figure 6 shows the result of that temperature decline. Witchita will end up with the climate of Sioux Falls, which in turn will be like Saskatoon now. The growing season loses a month at each end.

By P Gosselin on 24. Januar 2012
One of the IPCC’s most dubious achievements is ignoring so many papers showing that the sun plays a huge role in our climate. The sun play a role? Yeah, right!
A reader brings our attention to some recent papers showing that the sun plays a major role on climate, not that the IPCC will be the least bit interested. Here are a few in case you may have missed any.
1. Variations in tree ring stable isotope records from northern Finland and their possible connection to solar activity; Ogurtsov et al, 2010, see abstract here.

Statistical analysis of the carbon and oxygen stable isotope recordsr eveals variations in the periods around 100, 11 and 3 years.A century scale connection between the 13C/12C record and solar activity is most evident.”

The chronological correspondence between the ages of saltmarsh vegetation reductions and the minimum concentration values of 10Be in the GISP2 ice core supports the hypothesis that important fluctuations in the extent of the salt-marsh in the coastal Tavoliere plain are related to variations of solar activity.”

3. Solar and volcanic fingerprints in tree-ring chronologies over the past 2000 years; Breitenmoser et al, 2012

Results from wavelet analysis and SEA reveal significant periodicities near the solar DeVries frequency in the volcanic and residual ‘volcano free’ contributions during the LIA, making a clear separation of the solar and volcanic forcing signals difficult. Nevertheless, the ‘volcano free’ temperatures show significant periodicities near the DeVries frequency during the entire past 1500 years, pointing to a solar imprint on global climate.

This major oscillation may be related to a non-linear response of the climatic system to the gradual decrease in insolation, in addition to seasonal and inter-hemispherical changes in insolation. Another major climate oscillation around 7500 – 7000 cal BP may have resulted from combined effects of a strong rate of change in insolation and of variations in solar activity.”

5. Variations in climate parameters at time intervals from hundreds to tens of millions of years in the past and its relation to solar activity; Raspopov et al, 2010, see abstract here.

Our analysis of 200-year climatic oscillations in modern times and also data of other researchers referred to above suggest that these climatic oscillations can be attributed to solar forcing. The results obtained in our study for climatic variations millions of years ago indicate, in our opinion, that the 200- year solar cycle exerted a strong influence on climate parameters at those time intervals as well.”

Solar activity may be the dominant force that drove the same-phase variations of the temperature and precipitation in north central China.

Our results show that there exists a long-range cross-correlation between the sunspot numbers and the underlying streamflow records.”

Doesn’t Hajian work for the Iranian gas and oil industry?
---------
Other independent scientists, the astrophysicists especially, even if they are also skeptical of AGW hypothesis, are not that convinced of Dr. Archibald's analysis. But the difference among them are relatively minor, compared to those scientists and environmental groups who totally disregard the role of the Sun and are too focused on regulating and taxing human activities and energy use.