Governments' heavy intervention in the pricing of privately-produced goods and services like medicines often create more problems than solutions, more troubles to patients than treatment. This is because companies, enterprises and individuals have different product characteristics, quality, cost of R&D (if any) and production, and pricing. When government steps in, it thinks a one-size-fits-all policy will apply to all players.
I have discussed these issues in the past in this blog.

Here is the case of Greece, from  http://www.bloomberg.com/news/2012-01-10/greek-crisis-has-pharmacists-pleading-for-aspirin-as-drug-supply-dries-up.html. 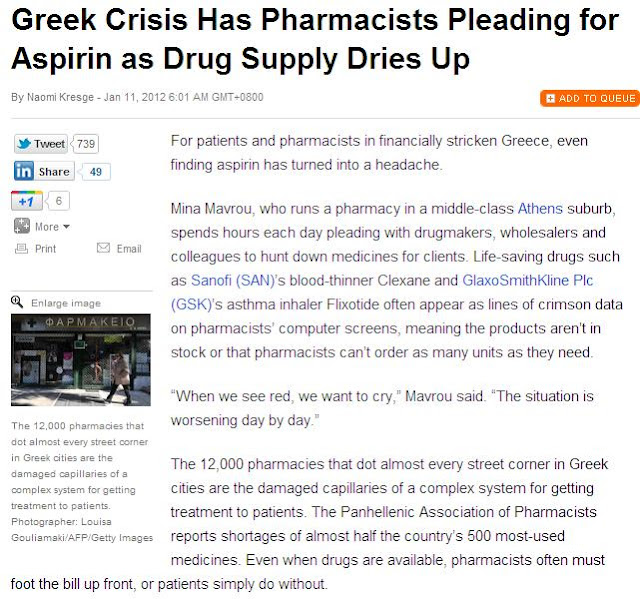 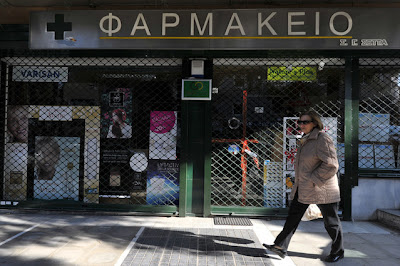 The reasons for the shortages are complex. One major cause is the Greek government, which sets prices for medicines. As part of an effort to cut its own costs, Greece has mandated lower drug prices in the past year. That has fed a secondary market, drug manufacturers contend, as wholesalers sell their shipments outside the country at higher prices than they can get within Greece.

Strained government finances only make matters worse. Wholesalers and pharmacists say the system suffers from a lack of liquidity, as public insurers delay payments to pharmacies, which in turn can’t pay suppliers on time....


Austerity measures imposed to address the financial crisis may paradoxically be making matters worse. Greek wholesalers now have more incentive than ever to sell drugs outside the country after Greece implemented a law last year further reducing prices. The law sets prices of medicines according to the average of the three lowest charges in 22 European Union countries, part of an effort to trim a health bill that in 2010 totaled more than 13 billion euros, or about 5 percent of GDP.

Parallel imports peaked in 2004, then flattened out about two years ago once drugmakers imposed quotas of the maximum amount of medicines they think the Greek market will need, said Kobelt, whose Brussels-based association represents companies engaged in the trade. Still, if pharmacies can’t pay, it makes economic sense to ship the drugs back out again rather than let them languish on wholesalers’ shelves, he said.
Kobelt said he’s seen boxes of Bayer AG (BAYN)’s Aspirin in Poland that originated in Greece, suggesting that the medicine fetches higher prices in eastern Europe.
“Even Polish people pay more than Greeks for Aspirin,” he said. “That is the recipe for parallel trade, I’m sorry to say.”
Novo Nordisk A/S (NOVOB), based in Bagsvaerd, Denmark, is a case in point.
“We are competing with our own products,” said Mike Rulis, a spokesman for the company.
Novo stopped selling some of its higher-priced insulins in Greece for about a month in 2010 after the government cut prices by about 25 percent. The drugmaker now ships in the same volume as before the cuts, yet pharmacists are running short of insulin, Rulis said in a telephone interview....

There you go. Another case of "cheap but not available" products. If a company will earn more by exporting their products abroad than selling them domestically, they will do so. Some people and quarters will object to this practice, so they will propose another round of government intervention after price control: export control. This will create two new problems. First is more government corruption. The implementors of export control are just people, they can be bribed if the price is right. Second is outright closure of a company, even temporarily, since there is no use operating at a loss.

The problem of "cheap but not available" is also happening in many rural drugstores in the Philippines and elsewhere. Some private drugstores buy on those cheap drugs sold by government-sponsored Botika ng Bayan or Botika ng Barangay, when the latter run out of supply, the private pharmacies, or often just miscellaneous shops or "sari-sari stores", sell those drugs at a higher price.

There is a difference in the drug price control policy design between the Philippines and Greece. In the former, only 21 drug molecules, among the most popular prescription medicines in the country, covering several dozen preparations were affected. In Greece, it's implied in the news report above that many if not all drugs were covered. Different designs but the same wrong policy that produce the same wrong results.

Price control is slapping penalty for successful and more effective drugs. When government penalizes formal and officially registered businesses, informal and unscrupolous businesses come in, with a distorted social result.
----------

Meanwhile, here is an index of my papers on this subject last year:

Thanks for the information. Is drug price control prevalent also in other European countries? Just curious.

But if the Greece government did not impose drug price control, its already thin public resources for healthcare would be more strained.