I am posting two old news reports -- in December 2007 and August 2010 -- about Denmark's labor and welfare system, then make short discussions about them.

COPENHAGEN — As a self-employed software engineer, Thomas Sorensen broadcasts his qualifications to potential employers across Europe and the Middle East. But to the ones in his native Denmark, he is simply unavailable.
Settled in Frankfurt, where he handles computer security for a major Swiss corporation, Sorensen, 34, has no plans to return to the days of paying sky-high Danish taxes. Still, an unknowing headhunter does occasionally pass his name to Danish companies.
"When I get an e-mail from them, I either respond negatively but politely," Sorensen said. "Or I don't respond at all."
Born and trained at Denmark's expense, but working - and paying lower taxes - elsewhere in Europe, Sorensen is the stuff of nightmares for Danish companies and politicians searching for solutions to an increasingly desperate labor shortage....
Young Danes, often schooled abroad and inevitably fluent in English, are primed to quit Denmark for greener pastures. One reason is the income tax rate, which can reach 63 percent....


Denmark is the home of "flexicurity," the catchy name given to a system that pays ample unemployment and welfare benefits but, unusually in Europe, imposes almost no restrictions on hiring and firing by employers. The mixture has served Denmark well, and its economy barreled ahead in 2006 by 3.5 percent, one of the best performances in western Europe. The country is effectively at full employment.
But success has given rise to an anxious search for talent among Danish companies, and focused attention on émigrés like Sorensen. The Organization for Economic Cooperation and Development, which is based in Paris, projects that Denmark's growth rate will fall to an annual rate of slightly more than 1 percent for the five years beginning in 2009, reflecting a dwindling supply of a vital input for any economy: labor.
The problem, employers and economists believe, has a lot to do with the 63 percent marginal tax rate paid by top earners in Denmark - a level that hits anyone making more than 360,000 Danish kroner, or about $70,000. That same tax rate underpins such effective income redistribution that Denmark is the most nearly equal society in the world, in that wealth is more evenly spread than anywhere else.
The movement toward lower taxes passed Denmark by, even as it took root in much of Europe.
Small East European countries, notably Estonia and Slovakia, started the trend by imposing low, flax taxes on income and corporate profits about five years ago. Those moves helped prod Austria, and eventually, Germany, to slash high marginal rates as well.
Danish taxes also contrast sharply with those in nearby London, often jokingly referred to among Danes as a Danish town, because so many of them live there. Lower taxes on high earners have been a centerpiece of the policy mix that has fed the rise of London as a global financial center since the 1980s.
But today young Danes can easily choose not to pay for the system's upkeep, once they have siphoned off what they need. For starters, as citizens of the European Union they are entitled to work in any of the 27 EU countries.
Sorensen, who graduated from business school in Copenhagen, found himself earning the equivalent of more than $100,000 before he was 30 - and paying 63 percent of it in taxes. His work as a computer consultant for Deloitte also took him to Brussels, where he met the Spanish woman he would eventually marry.
But the high taxes, mixed with his wife's discomfort in Denmark, meant that a job offer in Qatar three years ago was all it took to pry him away from Copenhagen. Now, he is ensconced in Frankfurt, setting up a new business on the side and planning to pay no more than 25 percent of his income to the German state....
(2)  http://economix.blogs.nytimes.com/2010/08/16/why-denmark-is-shrinking-its-social-safety-net/
August 16, 2010, 12:12 PM


Why Denmark Is Shrinking Its Social Safety Net

Denmark has long held the title of the best place on earth to be laid off. With an expensive, generous welfare state, and the world’s most lavish unemployment insurance scheme, virtually no one falls through the cracks upon losing a job.
But the government unveiled an unpleasant surprise in June, when it halved the country’s whopping four-year unemployment benefits period to help mend its finances after the financial crisis.
The reason: Danish studies show that the longer a person goes without a job, the harder it is to find work. Many people get a job within the first three months of entering the system, but many more wait until just before benefits expire to take anything available.
“So you need to have a period of unemployment that is as short as possible,” Claus Hjort Frederiksen, the finance minister, told me recently in Copenhagen.
Consider this 2009 chart from Denmark’s Labor Market Commission: 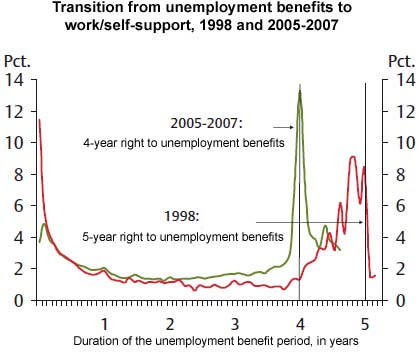 Denmark’s Labor Market Commission
It shows that between 2005-7, the number of people who got jobs during their four years of benefits — the green line – rose at the beginning before dropping sharply, then spiked as benefits were about to run out, only to plummet after. The red line shows similar behavior in 1998, when Denmark’s benefit period was five years.
“It shows that people are not seeking all the jobs they could get, but just the jobs they would like to have,” said Steen Bocian, chief economist at Danske Bank.
That luxury has become too dear as Denmark exits a two-year downturn.
In addition to halving the unemployment benefits period, the government is pinning high hopes on job activation programs, one of the three pillars in Denmark’s famed “flexicurity” model. Employers have carte blanche to hire and fire, and in turn, the jobless are guaranteed benefits if they attend retraining and job placement programs tailored to prepare them for work where labor is scarce....
--------

High income tax in Denmark and elsewhere can result in outmigration of many of its skilled labor
force (those who will pay more taxes) and inflow of un- or less-skilled labor force (those who are likely to receive unemployment benefits and other welfare).

And if you reward people for not working, many of them will definitely not work and reap the reward, like the four-years unemployment allowance. You cut it to two years, many people will still grab it and not work for two years and keep receiving unemployment allowance and other government subsidies. Meanwhile, the government will suffer more fiscal bleeding as some of their more productive, more ambitious citizens will move out and migrate elsewhere in order to escape the high taxes they have to shoulder so that the generous welfare and subsidy programs of the government will be sustained even partially.

Globalization and state welfarism will ultimately clash. Welfarism is partly premised on the belief that citizens will stay in the country so they can enjoy the "cradle to grave" welfare that their governments will provide them. But many young, talented and ambitious people want more individual freedom -- more travel, more adventure, more modern gadgets, more work competition. And it's the lower taxes, less state welfare countries that tend to attract them.
--------