Two days ago, two friends posted this article below in their facebook status. One is a physician, the other is a reporter whose brother is a cancer patient, and they both wonder if this is possible -- a miracle anti-cancer drug. Here's the story:

Scientists cure cancer, but no one takes notice

Canadian researchers find a simple cure for cancer, but major pharmaceutical companies are not interested.

Researchers at the University of Alberta, in Edmonton, Canada have cured cancer last week, yet there is a little ripple in the news or in TV. It is a simple technique using very basic drug. The method employs dichloroacetate, which is currently used to treat metabolic disorders. So, there is no concern of side effects or about their long term effects.

This drug doesn't require a patent, so anyone can employ it widely and cheaply compared to the costly cancer drugs produced by major pharmaceutical companies.

Canadian scientists tested this dichloroacetate (DCA) on human's cells; it killed lung, breast and brain cancer cells and left the healthy cells alone. It was tested on Rats inflicted with severe tumors; their cells shrank when they were fed with water supplemented with DCA. The drug is widely available and the technique is easy to use, why the major drug companies are not involved? Or the Media interested in this find?

In human bodies there is a natural cancer fighting human cell, the mitochondria, but they need to be triggered to be effective. Scientists used to think that these mitochondria cells were damaged and thus ineffective against cancer. So they used to focus on glycolysis, which is less effective in curing cancer and more wasteful. The drug manufacturers focused on this glycolysis method to fight cancer. This DCA on the other hand doesn't rely on glycolysis instead on mitochondria; it triggers the mitochondria which in turn fights the cancer cells.

The side effect of this is it also reactivates a process called apoptosis. You see, mitochondria contain an all-too-important self-destruct button that can't be pressed in cancer cells. Without it, tumors grow larger as cells refuse to be extinguished. Fully functioning mitochondria, thanks to DCA, can once again die.

With glycolysis turned off, the body produces less lactic acid, so the bad tissue around cancer cells doesn't break down and seed new tumors.

Pharmaceutical companies are not investing in this research because DCA method cannot be patented, without a patent they can't make money, like they are doing now with their AIDS Patent. Since the pharmaceutical companies won't develop this, the article says other independent laboratories should start producing this drug and do more research to confirm all the above findings and produce drugs. All the groundwork can be done in collaboration with the Universities, who will be glad to assist in such research and can develop an effective drug for curing cancer.

You can access the original research for this cancer here.

This article wants to raise awareness for this study, hope some independent companies and small startup will pick up this idea and produce these drugs, because the big companies won't touch it for a long time.
I commented in my friend's wall that this is a weird if not fictional story. No author, no name of "Canadian scientists" given, no name of a research center at the Univ. of Alberta, etc. It also attacks multinational pharma for their "patent greed". But if it is true that it is indeed a powerful and revolutionary drug and treatment and it's not patented, then there are thousands of generic manufacturers worldwide which are more than willing to manufacture and market such drug. So how come that none of the major generic manufacturers at least, are not coming in to develop and market it?

This is more like an urban legend story, like those "cars that run on water, but the big petrol companies are not interested in it." Unless more details are provided.

Another friend gave this link:
This came from snopes.com: http://www.snopes.com/politics/medical/cancercure.asp

snopes.com: Scientists Cure Cancer, But No One Takes Notice
www.snopes.com

Snopes.com is for rumors and crackpot stories. If it's indeed true, then it should pass regulatory approvals by FDAs, and big generic companies like Unilab or Ranbaxy or Dr. Reddys will immediately manufacture it. Effective na, zero patent pa, where can you find such story except in rumor mills.

That story can also be compared to those "cure all" food supplement. Like this story which I wrote last year:

Some drugs, food and drink supplements that are said to act like drugs and vaccines, are sold not in drugstores and pharmacies, but in ordinary houses and offices, or sold by ambulant vendors walking in the streets, moving from house to house, the drugs are in their bags.

Quality of these drugs and food supplement is suspect given the way they are stored, handled and transported. Also, their manufacturers and wholesalers are most likely not properly registered with the government's Food and Drugs Administration (FDA), or they do not belong to any of the existing drug manufacturers and traders' associations like PHAP (mostly multinationals) and PCPI (domestic). 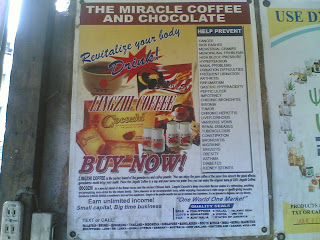 Here is an example of those "miracle" drinks and food supplement. A coffee and chocolate that can help prevent more than two dozen type of diseases! I took this and the next 2 pictures of the posters on the wall of a car repair shop in Quezon City last month. I do not know when these posters were put there. 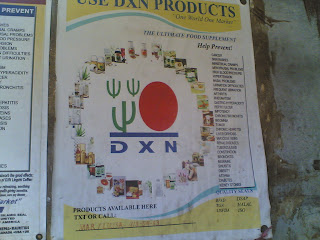 That coffee and chocolate is one of the many food supplements of "DXN Products: One world one market" as shown in this picture. There is no name of the manufacturer, only the name of the seller, a certain "Mar/Luisa" and their telephone number. But the poster said their products have the "Quality Seals (from) BFAD, TGA, USFDA, DSAP, HALAL, ISO". 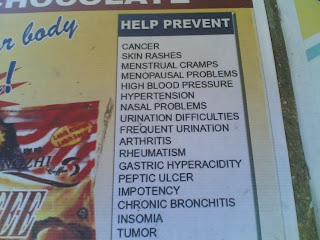 They are indeed miracle food and drinks -- if they are true. I do not know how many types of cancer, probably a dozen or two, and their food-coffee products can help prevent various types of cancer.

The FDA, DOH, DTI and other government agencies are supposed to check these sellers and producers because it involves public health. A poor man suffering from any or many of the diseases mentioned and is desperate to get well without seeing a doctor, without undergoing expensive laboratory and diagnostic tests, without buying expensive medicines and vaccines, will be tempted to buy their products. If that person will not get well, or if he becomes even more sickly as the disease in his body is not killed or controlled and further evolves and expands, that person would not know. Perhaps he will think that he did not get well because he did not buy the other goods advertised by the sellers of "DXN Products".

But I do not believe that the government agencies mentioned above have the resources or the intention to do that job. The other food and drug manufacturers would have some idea of who these manufacturers are and where they are located, so they can help report these people to government authorities. Or civil society groups and private citizens can report or just expose these firms and their products.

The desire to find "magic" and "miracle" drugs, food and drinks which are cheap and easily available is understandable, especially if one is poor. The government can help attain this goal by drastically cutting or removing all taxes and fees on legitimate drugs and food supplement to make them more affordable. Or by inviting and attracting more producers and sellers of those cheap and effective drugs and food supplement, both domestic and multinationals, provided they are legitimately registered with FDA and/or they belong to any publicly-recognized industry associations. The latter will police their ranks and not accept applicants, or kick out members, that violate their code of ethics and business practices that can endanger public health.
Posted by Bienvenido Oplas Jr at 11:22 AM