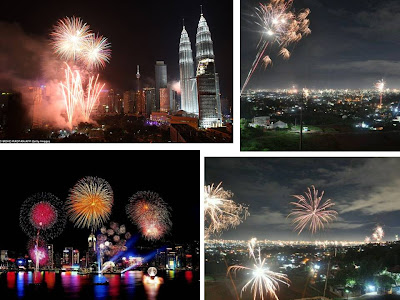 One good thing this new year -- there are less firecracker explosions than in previous years. Or there may be about the same, but they end quick. 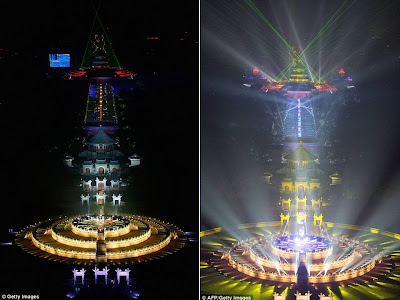 Fireworks in Beijing. The fireworks culture has slowly set in among the Filipinos. There are many fireworks display in big cities around the country, especially in Metro Manila. Here in Iloilo City, there were also several fireworks display. It should be a case of the price of fireworks coming down, they are becoming more affordable to the middle class, thanks to competition among various fireworks manufacturers.

Another is that the gory photos and videos of people who lose their arms and other body parts has scared many people from buying those powerful firecrackers. There are also government campaigns, led by the DOH, to discourage people from lighting those firecrackers. 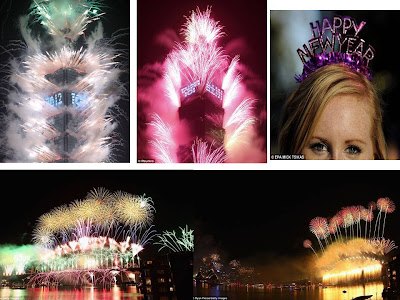 Fireworks in Taipei and Sydney. Luckily, I've been to these two cities. In October last year in Sydney, and November this year in Taipei, both to attend a conference. Taipei isn't really glitzy compared to say, Hong Kong or Singapore or Seoul, but Taipei 101 building is really tall and very prominent in the city. 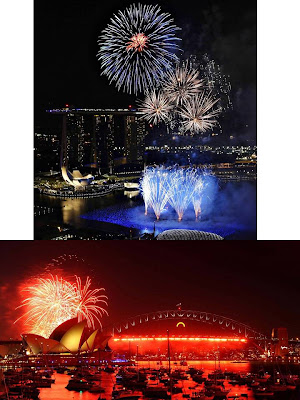 Singapore and Sydney fireworks today. My trip to Sydney last year was my first and last, so far. I like that city, but like all other big and modern cities worldwide, it is expensive.

Fireworks mean glitzy and colorful lights on the evening sky. They also symbolize economic prosperity of the people, or some wealth (even borrowed one) of governments, who sponsor the celebration and light up the sky. And only liberty and economic freedom can guarantee economic prosperity. Economic monopolization and centralization, usually by political dictatorships, always result in disaster and mass poverty. 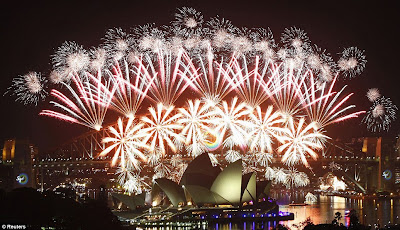 Once more from Sydney. Photocredit from Daily Mail, Here comes 2012! Spectacular fireworks light up the skylines as countries across the world welcome the new year

New year means new challenges. Or looking at old challenges in a newer perspective. Each passing day, month and year is a stepping stone to acquire new knowledge and new perspectives. Slowly we are building a more modern, more plural, more diverse but more peaceful society. There is less war around the world, and any existing wars are always sponsored by BIG governments with big armies and big debts.

And slowly we are building a more free society into the future. For ourselves, our children and the generations to come.
Posted by Bienvenido Oplas Jr at 6:13 AM