Here is the latest stats from The Economist on trade, current account and budget balances of rich and emerging economies worldwide. From the table on "Trade, exchange rates, budget balances and interest rates" December 31st 2011 issue, http://www.economist.com/node/21542207 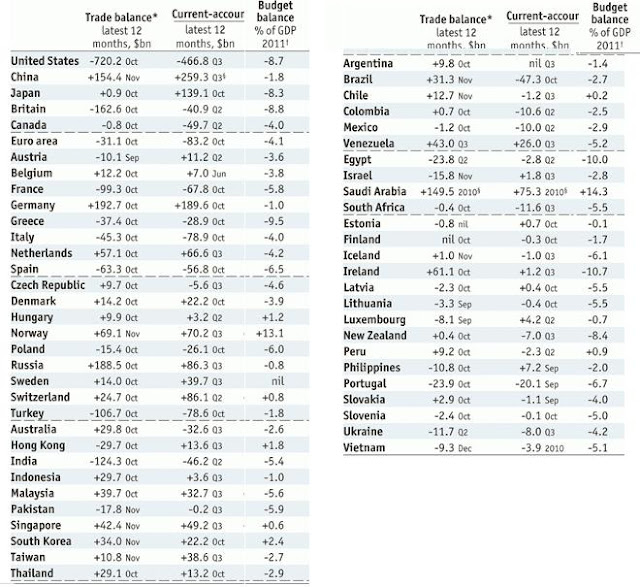 To summarize, here are the countries with:

But the most glaring fact here is that fiscal irresponsibility -- governments which are continuously living beyond their means, spending much larger than their revenues and keep borrowing like crazy -- is alive and kicking for so many countries. Only the governments of Saudi Arabia and Norway have high budget surpluses. Saudi is a big oil exporter, the government, the monarchy, is earning a lot from oil revenues, that's why. In the case of Norway, the government there has lots of revenues from energy sales and exports, among others.

Big government in general is wrong. Government administrators and political leaders tend to over-promise to voters and in the process, encourage the abdication of more personal and parental/guardian responsibility in running the people's own lives. It shifted the attention to more "government responsibility" via nannyism and costly welfare system. Over the long term, heavy public debts and the economic and financial instability caused by such heavy indebtedness is causing diswelfare to the people.
--------