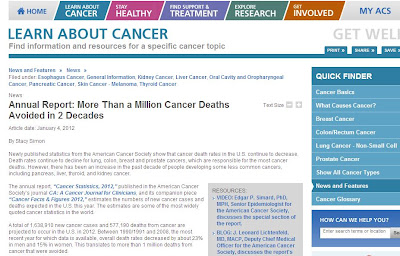 Some good news and bad news here. The good news is that death from cancer is declining, at least in the US. The American Cancer Society released two days ago its report, Annual Report: More Than a Million Cancer Deaths Avoided in 2 Decades:

The American Cancer Society estimates that about one-third of cancer deaths in 2012 will be caused by tobacco use and another third will be related to overweight or obesity, physical inactivity, and poor nutrition.

Each year, American Cancer Society researchers include a special section in “Cancer Facts & Figures” highlighting an issue of cancer research or care. This year, the topic is cancers with increasing incidence trends. Despite a decline in the rates of the most common cancers, there has been an increase in the rates of several less common cancers: pancreas, liver, thyroid, kidney, melanoma of the skin, esophageal adenocarcinoma (a kind of esophagus cancer), and some kinds of throat cancer associated with HPV (human papillomavirus) infection.

Reasons for the increased rates are not entirely known. But increases in esophagus, pancreas, liver, and kidney cancers may be linked to obesity. It’s also possible that more of these cancers are being reported because of better early detection practices. These rising trends are part of the additional burden associated with an expanding and aging population, and call for additional research to determine the cause.

Yes, there are several reasons why cancer death is declining for some types of cancer, like early detection, changed and improved lifestyle, and newer and more powerful medicines. But as the report added, there is also an increase in the incidence of new types of cancer especially those that are directly related to unhealthy lifestyle like obesity, smoking and sedentary living. Only about one-third of the causes can be due to genetics and internal factors, the two-thirds are due to unhealthy lifestyle.

Of course the good news is that the average lifespan of people keep rising as infectious and communicable diseases are now more easily treated compared to many years ago, which reduces death rate now. And speaking of new medicines, the US FDA has approved last year seven new drugs against cancer: 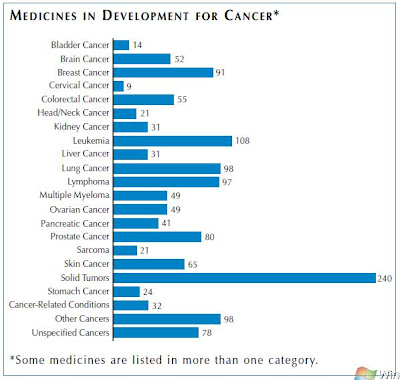 Now here's a piece of good news: there are nearly 900 new drugs under various phases of R&D and clinical trials being developed by the US' pharma companies and biotech research firms. See the report here, Nearly 900 Medicines and Vaccines in Testing Offer Hope in the Fight Against Cancer. It's 92 pages long.

But while developing new and more powerful medicines against various type of cancer will definitely help, preventive healthcare like healthy diet, non- or reduced smoking and heavy drinking will greatly help.

The rising death for some diseases due to unhealthy lifestyle should not be used as an excuse to allow governments to intervene further in healthcare, like imposing new rounds of drug price control and/or patent and IPR-busting policies. People and governments should be thankful that while many people tend to be not-so-responsible in handling their own body, some enterprises keep doing expensive R&D and clinical trials to give these people a second or more chance in life. People who survive cancer and other life-threatening diseases are not likely to abuse or continue to abuse, their body.
---------

I''m Charlotte Johnson,65  years old, Here in Edmonton, Canada. With the new herbal mix medicine I purchased from Dr James herbal mix medicine West Africa  was my only way to get rid of my Alzheimer's, the herbal  mix medicine effectively reversed my condition and alleviate all symptoms.  I was initially very hesitant to discuss my Alzheimer but I just hope it can still help someone. I feel this will be very important information for all Alzheimer patients, because the most violent element in society today is ignorance. Be it any condition, a healthy diet and natural herbs and roots medicine from Dr. James is the road to fast recovery. I had suffered Alzheimer for many years, I fought for proper medical recommendation, care  and all form of humane treatment with little improvement I went through many sleepless nights and periods of intense grief, as do most families. I was recommended by a friend to use Dr. James herbal mix medicine for my Alzheimer with high hope and assurance. I never doubted my friend but to contact Dr. James. And purchased His herbal mix medicine which was effective and I finally feel my Alzheimer is gone with no more symptoms. He also told me that he cures diseases such as  Lungs diseases, kidney diseases, Warts, Bipolar disorder, Shingles,  HPV, ALS, CANCER, NEPHROTIC SYNDROME, HIV / AIDS, Herpes virus, Ovarian Cancer, Pancreatic cancers, bladder cancer, prostate cancer, Glaucoma., Cataracts, Macular degeneration, Cardiovascular disease, Autism. Enlarged prostate, Osteoporosis. Alzheimer's disease, psoriasis, Tach Diseases, Lupus, Backache, dementia, skin cancer,.testicular Cancer, Leukemia, HEPATITIS A, B, C, Contact  the great one on his email    greatcureman@gmail.com
Info @ drjamesherbalmix@gmail.com