A cardiologist friend, Dr. Tony Leachon, former medical director of Pfizer Philippines and now a P1 a year consultant to the DOH on non-communicable diseases (NCDs), sent me three of his recent papers on NCDs. He gave me permission to post these in my blog. This is the first and shorter paper. Thanks Tony.

Photos below, I got them from the web, Fierce Fat Filipina Diva, and Fat People of Color. Meaning these are publicly available, voluntarily posted by their authors, I did not steal these shots. Photos added to illustrate the issue that Tony is discussing.
----------------

Fat Filipinos not Funny at all : Young and Poor Affected 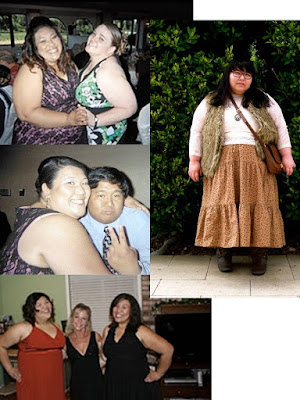 In the schools, malls, and in the clinics, we are seeing more and more obese patients than the last few years through determination of high body mass index (BMI) and high waist to hip ratio. Coupled with this glaring finding is the raised blood sugar and abnormal serum lipid values. This trend is evidently seen in Southeast Asian countries due to globalization and urbanization. If we will not act urgently about this phenomenon through strong government policy recommendations , the Noncommunicable diseases will further hurt the disadvantaged sector specifically the young and poor segment of the population.

NCDs are not exclusive to the affluent elderly patients now but they are seen across all social classes and more dominantly in the young and poor population. This results from unhealthy dietary patterns such as high calorie intake from total fats ( indigenous oils and coconut oil ) , high consumption of sugars and sweetened beverages and low consumption of the more expensive fruits and vegetables. In 1977, Prof Gerald Reaven of Stanford University theorized that obesity was the trigger risk factor in the development of a medical condition known as Syndrome X composed of the ff : obesity, hypertension , diabetes mellitus , hypertriglyceridemia and low HDL. It has undergone massive research work and has evolved into the so- called Metabolic Syndrome leading into NCDs , killing millions every year.

According to Prof Antonio Dans et al , Lancet Article Feb 2011 , abdominal obesity might be more important in people of Southeast Asian countries than from the rest of the world. In the INTERHEART study, waist to hip ratio was a better predictor of coronary artery disease than was BMI. This finding was especially true in Southeast Asian people , in whom a high waist to hip ratio increased in the likelihood of. CAD almost four times compared with a two fold rise in the world population.

Though the prevalence of obesity is increasing in the Asian region, there is paradoxical persistence of under nutrition. This double burden of malnutrition ( undernutrition and over nutrition ) presents a great and difficult public health challenge for a poor country like the Philippines because catch up weight gain after perinatal and postnatal restriction has been postulated to increase risk of diabetes and cardiovascular complications (Stein , 2005).

Recently, Internet addiction , in which the individuals spend an excessive amount of the time online , is recognized by some experts as an evolving medical condition . In the era of the internet, Twitter, and Facebook , obesity will continue to rise due to the lack of physical activity with increase of unhealthy eating patterns - high intake of French fries , burgers, pizza, sweetened beverages , junk foods, and low intake of expensive fruits and vegetables. On another concern , smoking with obesity is a deadly combination - tobacco use among children aged 13-15 years was very common in the Philippines (28 % in boys and 17 % in girls ). (WHO,2009).

One disturbing fact now based on the preponderance of data is the finding that deaths from NCDs in the region are highest in countries that are economically poor. If this inequality or inequity is to be corrected , healthcare delivery has to be structured in a manner that maximizes use of meager resources and strikes a careful balance between speedy public health interventions and medical services. Public and preventive health programs have a unique advantage in that they do not involve massive investments in costly equipment and drugs.

Here are some pioneering recommendations that we need to do differently given our limited resources and the " silent " NCD epidemic that the young and the poor are facing :

1. Transformative education of teachers and all students from the primary and secondary education to the collegiate levels on preventive health education focused on healthy diet options and increase in physical activity with tobacco cessation as top priorities.

2.Local Government Unit heads will have to pass ordinances quickly to curb tobacco use , issue dietary guidelines and food labels , and build infrastructures like provision of pedestrian pathways so people can do physical activities.

4. The Food Drug Administration with the help of technical experts from the private sector has to regulate the nutritional industry through implementation of Food Label and calorie counter to restrict the use of high calorie foods ,trans fatty acids , sugars, and salts.

5. Civil society , including coalitions of affected individuals and their families , medical organizations, and the media champions should play a major part in holding our leaders accountable for delivering on their commitments on Noncommunicable Diseases.

The time is now to act to protect the young and the poor affected massively by NCDs.
-------

Leave people to choose and decide about their own body. If they wish to be thin or fat or whatever, it's their choice, why is it a public issue?

It is a public issue... when people get sick and they are not content of what they get from the health services, they blame the government as if it's the government who caused their disease.