The discovery and invention of new medicines and vaccines against various diseases remains a high-risk, high cost activity for the pharma and biotech companies involved in the process. This probably explains why there are more companies engaged in information and communications technology (ICT), in hotels and food chains, in airlines and forwarding, in telecomm and power, than in medicine development. For one, the latter is heavily regulated by all governments in all countries. The only pharma companies that don't get heavy regulations perhaps are the manufacturers of fake and counterfeit or substandard drugs because they operate underground and escape the heavy hands of various government health regulators. 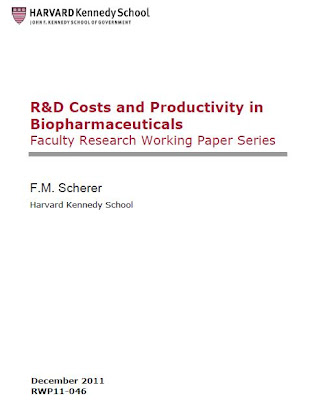 A physician friend sent me this morning a new paper, R&D Costs and Productivity in Biopharmaceuticals (see more papers at www.hks.harvard.edu). The paper is not really complicated, it only wanted to find out, among others, to what extent the costs in pharma R&D have increased so far, the increasing procedures required to get regulatory approval, and so on. But it is significant because it's a very recent paper, produced only last month, from the famous Harvard Kennedy School.

An alternative and more authoritative source to get info about R&D costs of pharma and biotech companies will be that of the Pharmaceutical and Research Manufacturers of America (PhRMA), infographics section, http://www.phrma.org/research/infographics. 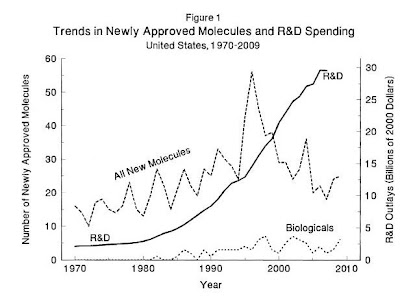 Dr. Scherer showed this figure at the start of his paper. The number of newly-approved drug molecules have increased greatly in the 90s, tapered in 2000s, but the cost of R&D spending has consistently rose in an almost linear path. Thus, sometime in 2009 for instance, the number of newly approved drug molecules and biologicals were around 30 and R&D spending was about $30 billion. Compare that in the late 90s where some 60+ newly developed molecules were approved but R&D spending was only around $15 billion.

The author compared independent research of cost estimations from other sources. He wrote,

The mean clinical testing estimates, which are undoubtedly more reliable than pre-clinical estimates, can be compared with the analogous costs from three earlier studies summarized by Scherer (2010, p. 154), each adjusted to year 2000 purchasing power levels: 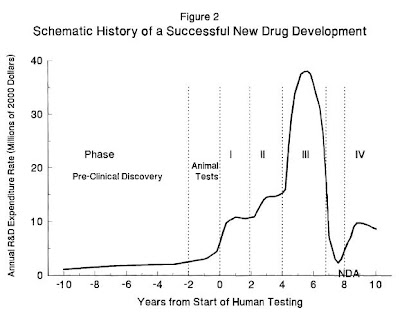 Another figure shown by Dr. Scherer, Phase 3 of clinical trials is the most costly, eating up to $40 million for each new drug. He wrote, On average, only one-fifth to one-fourth of the small-molecule drugs entering Phase I testing emerge roughly eight years later with marketing approval. For biological therapies developed during the 1990s, the survival probabilities appear to be higher -- e.g., roughly 0.3 from a survey by DiMasi and Grabowski (2007) and even higher for the earliest approved biologicals, which mainly emulated naturally occuring substances.

Given the complexity and high risks, high costs involved in developing new medicines and vaccines, it is indeed unfair that successful drugs will be slapped with certain government interventions that effectively penalize, instead of rewarding, new medicines innovation. The author did not mention in his paper anything about such threats in intellectual  property rights (IPR) of medicine discovery, but readers and observers who are keen on slapping patent-abrogation government policies like compulsory licensing (CL) and related measures, or be imposition of medicine price cap and control, are not likely to believe the high risks and costs involved in drug discovery. They only see the angle of "patented drugs = expensive drugs". Thus, to bring the prices of those more powerful and new drugs, patent life should be kept as low as possible.

This attitude is not healthy not only for the research and pharma companies, but more so for the patients today and tomorrow. We have read and seen cases of ever-evolving and mutating diseases. Such disease mutation are not likely to be effectively treated by old and existing medicines and vaccines, but by new and more modern ones. And it is also very likely that FDAs will be imposing new and more stringent rules and procedures before they approve new medicines and vaccines. In a situation of rising requirements and regulations, costs will also be rising and hence, prices of new drugs and treatment will be rising. Governments should in fact reduce costs-inflating policies like taxes on medicines as they raise the regulations to make future drugs more safe and more effective in killing diseases.
-------

I have read somewhere that pharma R&D is not that high, the big pharma pad up their costs in order to discourage entry of new players.

But any unsuccessful research and discovery of a certain molecule can also be used for future research and future medicine, right?