I attended the PIPER forum on "Fiscal Decentralization After 20 Years" last Monday, January 16, at Crowne Plaza Galleria Hotel, Ortigas Center. It was a whole day forum and many known personalities in the academe, Philippine government and foreign aid involved in decentralization were there. 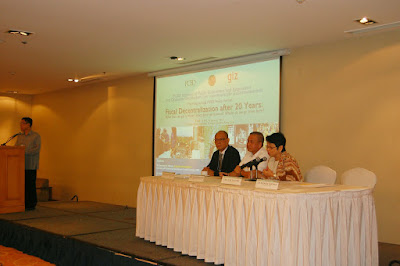 The 3 scheduled reactors to his presentation were former DOF UnderSecretary Milwida "Nene" Guevarra, DILG UnderSec. Austere Panadero, and NAPC UnderSec. Jude Esguerra. Hah, the Institute for Popular Democracy (IPD) guys Joel Rocamora and Jude Esguerra, among others, have joined the government big time. Well, they have been advocating reformed but big government for many years now, so their position fits with their advocacies. 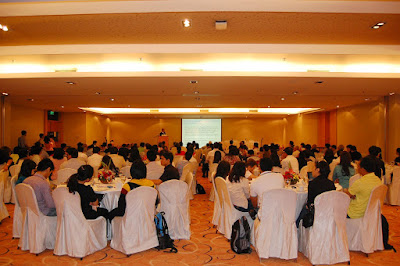 Jude did not arrive though, also USec Panadero, but he sent one of his senior staff to read his reaction paper. Then open forum started. I wanted to ask a question, but I saw some more popular personalities raising their hands, I said I better listen to them and ask my questions later, perhaps in the next session or panel.

Prof. Ben Diokno, my teacher twice at UPSE (undergrad in 1983 or '84, then PDE in 1998) used these slides as the theoretical framework in analyzing decentralization. The two benefits and advantages of decentralization, vs. its costs and disadvantages. 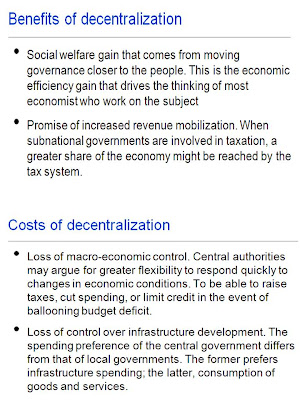 He noted that the Local Government Code (LGC) of 1991 was the most sweeping law changing intergovernmental structure and fiscal rules in the Philippines.

As seen in the graph here, the internal revenue allotment (IRA) given by the national government to the local government units (LGUs) have drastically increased since 1991. Unit on the vertical axis is percentage, not money. The table below explains why -- before the LGC, LGUs' share to internal taxes was only 20 percent, increased to 40 percent after the LGC. Besides, there has been considerable economic growth in the 90s, temporarily slowed down by the Asian financial crisis of 1997-98, and growth has slowly picked up, resulting in more internal tax revenues by the government, which leads to more IRA for LGUs. 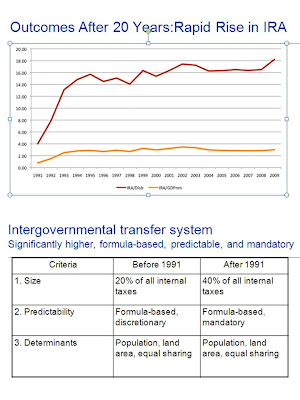 These two tables are helpful and self explanatory. The biggest gainer among the four types of LGUs in the country were the barangays or villages, from only 10 percent to 20 percent of total IRA share. There are now more than 42,000 barangays nationwide. 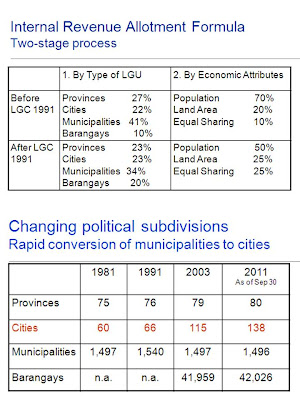 The number of cities has drastically increased as more progressive and more populous municipalities have been converted into cities. Cities have higher tax rates than municipalities so the city government were earning higher than municipal governments. More revenues are supposed to make things lighter for city governments, but it seems that all of them, no exception, are saying that they need more money -- from their local residents, from the national government, and from foreign aid through more borrowings. 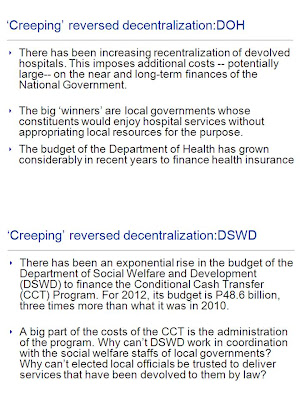 This is something new to me: "creeping recentralization" of certain agencies, especially the DOH and the DSWD. But the recent huge increases in the budget of these two agencies would prove correct the term used by Ben Diokno.

The CCT seems to be the single biggest program of the DSWD. The WB and ADB pitched in huge money for this program, they expect huge interest income from those loans too in the coming years. I am not a fan of the CCT program. Old programs are education and health for the poor, housing and credit for the poor, agrarian reform and irrigation for the poor, etc., not enough they say. So they added cash transfer for the poor, and soon, more condoms and pills for the poor. My longer discussion about the CCT, Welfarism 9: Conditional Cash Transfer (CCT), November 12, 2010.

The DSWD is the "outlier" here among the agencies which devolved their functions after 1991. From only 0.58 percent of total expenditures net of interest payment before the LGC, to 2.46 percent last year, such a big jump. The UN and its partner foreign aid banks, namely the WB and ADB, are hurrying the Philippines to reach its MDG targets which are supposed to be attained by 2015 or just three years from now. The DSWD plus the DOH are the main agencies that they see will greatly expand government and state welfarism. 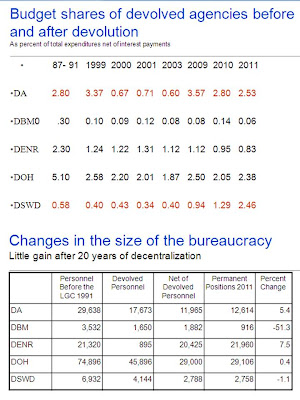 Here now are the major messages of Prof. Ben Diokno: decentralization was a failure in reducing disparities among communities and LGUs, and the big transfer of resources from the national government via IRA made many LGUs become lazy in raising their own local revenues. 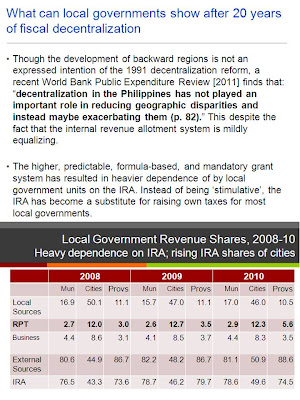 Twenty years after the LGC and fiscal decentralization, some 75 percent of provincial governments' total revenues were coming from IRA. For municipal governments, it's slightly higher at nearly 79 percent of their total revenues. It's only the cities, especially those in Metro Manila, that were more creative, and sometimes more extortionist, in raising local taxes. Big cities like Makati, Manila and Quezon are I think only about 10 percent dependent on IRA. These cities have invented dozens upon dozens of local taxes, fees and fines slapped on residents, business locators, and non-residents but do business in their cities. For instance, there are cradle to grave fees to pay: birth certificate fee, residence fee, marriage certificate fee, death certificate fee, etc.

Prof. Diokno is saying further that decentralization was a failure in arresting high poverty incidence in the country. Thus, there is need to recentralize this function, more jobs for the national government. So back to central planning at the national level via national government agencies (NGAs) like NEDA, DOF-DBM, DOH, DSWD, DA, DENR, etc. 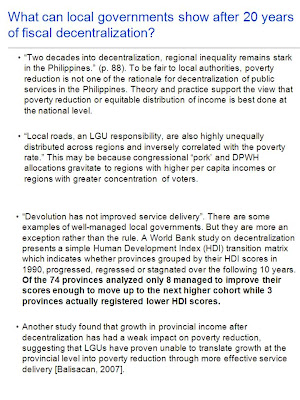 Being a non-fan of bigger local governments, I will not shed big tears for his proposal. My problem is that since many LGUs will oppose his proposal, we ordinary mortals, aka the taxpayers in the private sector, will be caught in the crossfire of fight between LGUs and NGAs for more taxes, more fees, more fines -- from our pockets. Let us remember that the government, national or local, is a penniless institution that becomes very powerful and very rich only by getting lots of money from our income, from our savings, from our investments, from our hard work and self-reliance. 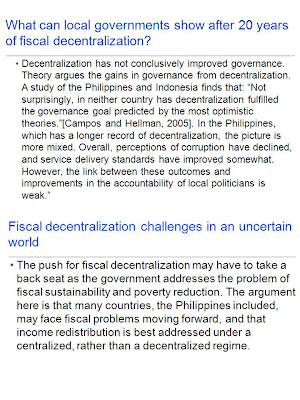 Clear message from him, once again: Centralization, not decentralization, is the answer to poverty reduction and other social and political goals of the government. 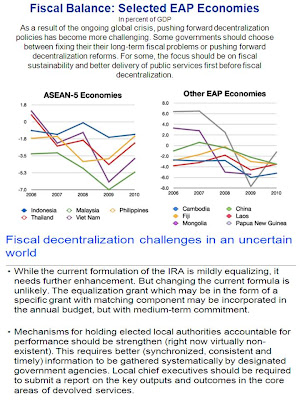 In her reaction, Nini Guevarra countered that decentralization has also produced many outstanding LGU leaders in the country. She cited some of them who were in that conference -- former Bulacan Governor Roberto "Obet" Pagdanganan, Albay Governor Joey Salceda, and Valenzuela Mayor Sherwin Gatchalian. But she recognized that many LGUs really lack accountability, so DILG Sec. Robrero has imposed a performance indicator system for LGUs which can be one of the new basis for the release of the IRA. She observed that while CCT has encouraged more children from poor families to attend schools, there is also lack of classrooms and teachers in poorer villages and municipalities. She thinks that there are bad LGU leaders because they don't have enough good role models.

During the open forum, Ms. Amina Rasul, a leader of a Mindanao-based NGO, lamented that autonomy of certain regions has not been given enough attention both by the presenter and the reactors. That autonomy, more than ordinary decentralization, is what is needed by more LGUs. Nini Guevarra argued that there is bad governance in the ARMM (Autonomous Region of Muslim Mindanao) due to bad politics by the national government (NG), but she added that there are a few good LGU leaders there.

Former NEDA chief and UPSE Dean Felipe Medalla asked how can we have good LGUs when we have lousy NG leaders. He also cited the claim of Cong. Mandanas of Batangas, that the NG owes LGUs some P500 billion in additional IRA because the IRA is based on total internal revenues of the NG, and about 80 percent of Bureau of Customs (BOC) collections are actually internal, not external taxes. And the NG has been using internal tax collections by the BIR only and excluded BOC internal tax collections.

I believe we simply need small and limited government, both at the national and local levels. The government should focus on promulgating the rule of law -- the laws against killing, murder, stealing, plunder, rape, extortion, carnapping, kidnapping, and many other criminal acts. It's a big and very important function but there is obvious government failure there. All malls, all private schools and universities, all villages and condo buildings, all churches, all big shops and restaurants, all banks, etc. are using private security guards to protect their property and customers from criminals. This is one clear and glaring example of distrust by the citizens and entrepreneurs of government failure, of both NG and LGUs in stamping out criminality in society.

Government, both national and local, should step back in heavy intervention, regulation and taxation in entrepreneurship and job creation by the private sector. The latter can take care of that. It is in the promulgation of the rule of law, of the protection of private property rights, protection of citizens against criminal elements, both private and government, that is sorely lacking.

I will discuss in the next paper, Prof. Gilbert Llanto's presentation on the assignment of functions and inter-government fiscal relations.
---------

Nonoy, note that the samples that you cited of mandate drift committed by government from "promulgating the rule of law" and protecting private property rights and protecting citizens against criminal elements should be the lookout more of local governments, based on the principle of subsidiarity. Perhaps excluding only "plunder", acts such as killing, murder, stealing, rape, extortion, carnapping and kidnapping are criminal activities that local governments, given their proximity, could and should pay closer attention to, literally.

Thanks Norman. Yes, I want the govt, national and local, to do that simple but impt job of running after criminals. Give us peace of mind so we can work more productively. Govt can do that job better if it moves away from secondary or non-sensical regulations like multiple bureaucracies in business registrations, going after smokers, so-called jaywalkers, motorcycle riders who have no helmets, motorists driving on "coding" days, etc.