Business Bureaucracy 4: How to Reduce It

Yesterday, a friend working for a big power company here posted in her facebook wall, The Philippine government's attitude towards investments- parang babae na napakasungit sa manliligaw, samantalang hindi naman maganda. (like an ugly woman who is unfriendly to suitors).

To which I replied: And this is supposed to be a liberal government. Liberalism in theory loves free market, dislikes intrusive and bureaucratic govt. Most Filipino liberals do not understand liberalism, only politics and opportunism.

Today, there is this interesting news report,


0share1616
MANILA, Philippines–President Benigno Aquino III on Friday witnessed the launch of the Philippine Business Registry–a one-stop shop for entrepreneurs that need to transact with several government agencies to start their business.
Trade Secretary Gregory Domingo said the PBR is one of the government’s priority projects to make business registration easier by streamlining the process and eliminating red tape.
Through the PBR, applicants no longer need to physically go to each government agency to start doing business.
These agencies include the Department of Trade Industry, Bureau of Internal Revenue, Social Security System, Pag-IBIG fund, Philippine Health and Insurance Corp., and the Securities and Exchange Commission.
The launch is just the first phase of the program as several other regulatory offices and even local governmentunits will connect to the PBR.
At the LGU level, Quezon City is already connected to the PBR. Cities with streamlined business permits and licensing systems such as Caloocan and Mandaluyong are expected to be linked to the system in the coming months.
PBR kiosks will also be put up in selected LGUs nationwide to facilitate registration in far-flung areas.
This is good news but long overdue. In his first State of the Nation Address (SONA) in July 2010, the President declared,

(Translation: "The endless procedures in registering a business name, which takes between four to 8 hours per day, we will reduce it to 15 minutes. The old requirement of 36 documents, we will bring it down to six. The eight pages application form, we will make it one page.") 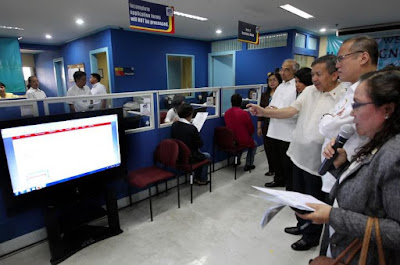 I hope this one-stop-shop PBR is not only for starting a business, but also for renewing various business permits of existing businesses.

Ultimately, I wish to see that the number of business permits will be reduced to only two:  one for national and one for local. Businesses simply show their transparency to the government, that they are a restaurant and not a beerhouse, that they are a beauty parlor and not a prostitution house, and so on. Local governments should also remove or abolish their multiple business permits -- electrical permit, health and sanitation permit, fire department permit, garbage collection permit, etc. before a Mayor's permit is issued.

Let the liberal leadership of the current administration implement really liberal policies, not bureaucratic and nearly socialistic ones.

Being jobless or unemployed for someone looking for work can be a devastating experience. A person wants to feel “needed” by society for some productive work and yet no one seems to be interested in hiring him/her.

An unemployment rate of 8 percent or higher reflects a problematic economy. Much more for those with 20 percent or higher, like Spain and Latvia in Europe. And if underemployment (those who have jobs already but are looking for additional work) situation is to be added, the situation would look really bad.

This is where entrepreneurs and job creators become really relevant. An economy and its government must strive to encourage more entrepreneurship, not discourage and penalize it with lots of bureaucracies and long business requirement regulations.