Migration and Freedom 16: Mobility and the Heckscher-Ohlin Theorem

(This is my article for the online magazine last night. I did not put the graphs in the original article, I only added them here, from a web lecture, The Heckscher-Ohlin Model,  http://www.valt.helsinki.fi/katal/opiskelu/ka6a/heckscher-ohlin.pdf) 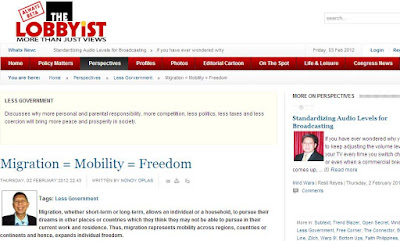 Migration, whether short-term or long-term, allows an individual or a household, to pursue their dreams in other places or countries which they think they may not be able to pursue in their current work and residence. Thus, migration represents mobility across regions, countries or continents and hence, expands individual freedom.

The expensive welfare system in many rich countries though results in one bad policy: migration paranoia by their governments and certain organized sectors in the destination countries. They think that in general, new migrants are just welfare seekers, and the labor unions think that new migrants are out to steal their jobs even if many of them are not willing to do "dirty work" at lower pay.

In international trade economics, if factors of production (labor, capital, technology, etc.) are mobile and free to move across countries, there will be factor price equalization (FPE) among countries, the FPE theorem. A labor-deficit or shortage country cannot always use robots and machines to do certain jobs, they need to import workers and managers from other countries. Taking care of the sick and aged for instance, cannot easily be done by robots, an economy must import nurses, caregivers and other health professionals from other countries. The migrant workers will receive higher pay (high compared to the prevailing wages and benefits in their home countries, but may be low temporarily in the host countries). The outflow of some workers will result in reduction in labor supply and hence, partial increase in wages in the country of origin. When this process continues over the long term, and skills training keeps improving in labor-surplus economies, like the ocean around the world, wages and benefits will somehow equalize worldwide. 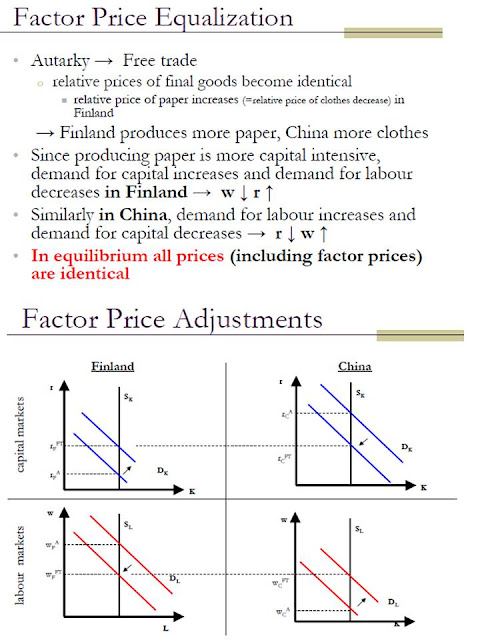 If there will be FPE, poverty will be eradicated. Only the lazy and highly irresponsible people will become poor, and they need not be bailed out or subsidized with various welfare programs because they have willingly chosen the path of laziness and irresponsibility. Then all the complaints and advocacies of the bleeding heart activists, trying-hard and hidden socialists, and social equality campaigners will be answered. No need for higher or new taxes, new UN and foreign aid central planning like the MDGs, new government bureaucracies and their endless global junkets.

A cousin concept of FPE is the commodity price equalization (CPE) theorem. If goods and services are free to move across countries, then products that are produced abundantly in one country resulting in cheaper prices can be exported to countries which have small or zero production of those goods and hence, prices there are high. Again, like the ocean around the world, commodity prices will somehow equalize worldwide. Whatever price differential across countries will just be due to transportation or shipment, storage, insurance and related costs. The existence of local trading monopolies and oligopolies can also account for such price differential but we will assume that such practices are kept to the minimum. 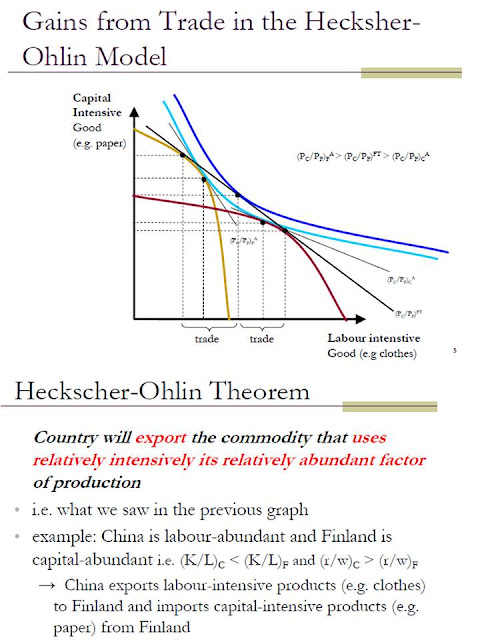 Migration paranoia, like climate paranoia and population paranoia, are of the same ideological DNA. All of them hate spontaneity and natural path of nature and human evolution, so all of them have one solution: more or big government. So government will control migration, and visa, more than a dozen types of visa -- migrant, dependent, student, working, visitor, training, etc. -- was invented by many governments. This is a big milking cow for many governments as there are plenty of direct and indirect fees to get a visa, lots of revenues that go to the governments’ treasury. And lots of possible extortion opportunities are opened up for the different government migration bureaucracies, like the Bureau of Immigration, POEA and OWWA.

In the US, both Republicans and Democrats, both socialists and democrats (and greenies, etc.) in Europe, other dominant political parties in rich countries in Asia, have invented various migration controls and regulations. There is discrimination and double standard, of course for their migration policies. European countries may impose strict and rigid migration and visa granting policies to many Africans, South Americans and mainland Asians, but not from oil-exporting Middle East Asia and North Africa. My Venezuelan friend was jokingly bragging his passport to us in our training in Sweden in 2003, he said that he does not need any visa to go to France, Germany, Italy, etc. because of Venezuelan oil, petroleum.

I got my second, multiple entry 10 years US (visitor) visa in April 2010. My first US visa was given in 2000. When I went to the US embassy for the interview for my second visa, I noticed that about 95 to 100 percent of the interviewees that day were smiling after the short interviews, usually only about 2-3 minutes on average. Meaning the US embassy was literally giving away (i.e., approving) US visa that time (or until now?) as the US was in deep economic recession then. So one lesson here is that economic hardships can prod a slightly migration paranoid economy to relax its visitor/migration restrictions to encourage more foreigners to visit their country and spend money there.

My last trip to Europe was in October 2008, I attended an FNF political seminar in Germany for 8 days, then I applied for 4 days extension to visit a friend in Bavaria (who then brought me to a glacier in Austria, nice), total of 12 days. The German embassy here gave me a Schengen visa for exactly 12 days, single entry.

One fear of the locals in host or destination countries is that migrants might abuse their expensive welfare system. While one long-term solution is to reduce the lenient welfare and subsidies given by the government to the sick, the unemployed and the young, the locals should also realize that migrants are taxpayers too, they contribute to the fund that their governments use for their welfare and pension. Migrants are usually willing to work on tasks that the locals would shun. Where there is more production of goods and services, there is more wealth in the economy. Both the migrants and the locals will benefit.
--------