After I posted RUM 2: SARAH, Drug Dependence and announced to several players and leaders in the Philippine health sector, focus shifted about drugs advertising and the molecular combination of paracetamol + ibuprofen of Alaxan FR. So I emailed the other day Dr. Suzette Lazo, a friend and Director of the Food and Drugs Administration (FDA, http://www.fda.gov.ph/) via our CHAT googlegroups, as well as Dr. Nazarita Tacandong, another friend and FDA Deputy Director. I wrote,

When Doc Delen de la Paz asked during the DOH Consultative meeting on RUM, "Is it advisable to combine paracetamol + ibuprofen (Alaxan FR) in the first place", I did not ask for her answer but I can see that her implied answer is No.

Doc Isidro Sia also gave the warning of not taking that drug on empty stomach as there is high possibility of adverse health results, suggesting that the combination of those 2 molecules can be tricky.

"In response to your question in your blog, it is irrational to combine paracetamol and ibuprofen in my professional opinion. This is an example of fixed dosed combination. But United Lab may have some scientific data to show efficacy, but I have never seen this. I wonder if BFAD then allowed this based on science or based on other reasons."

That's 0-3 score disfavor for Alaxan FR molecular combination. I am no physician nor pharmacist so I have to ask you this question, why FDA allowed such combination given the high use of that drug by the public?

Doc Suzette gave a reply, below. She gave me permission to post her reply in this blog. Meanwhile, here are some of the ads for Alaxan FR, a very popular pain reliever here mainly because of its endorser, Manny Pacquiao. 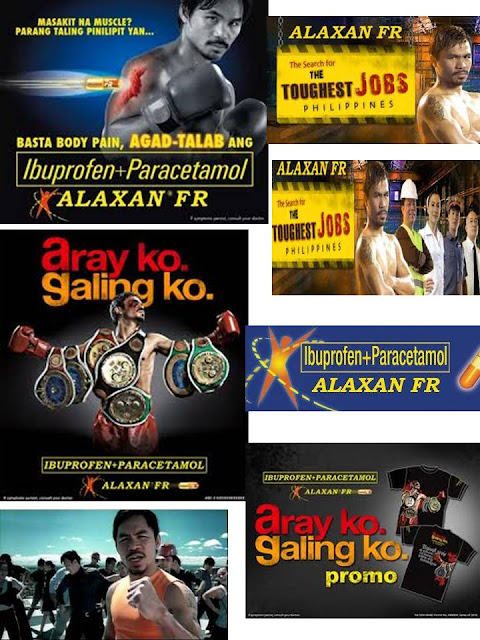 Noy, this drug has been approved by the FDA since the 80s. The requirement is that for fixed-dosed combinations to be approved they must be compliant on a number of things: show synergy (of efficacy), stability of components in combination, etc. So as this was approved, Alaxan must have complied. Of course, fixed dose combinations get rather contentious sometimes because of differing opinions, which may not hold much water unless supported by evidence. An important issue is if there's a safety problem here? Are (we) seeing cases of drug-related morbidity related to use of the drug? There's no data so far from the people who are criticizing it so where do we go from here?

For your info there are far worse preparations that have been approved and these things sell too. FDA is in the direction of working towards cleaning up the bundle of approved drugs but this wont happen overnight.

I gave a profuse thank to Doc Suzette. Meanwhile, I also bcc'd in my email to Doc Suzette Ms. Leonila "Leonie" Ocampo, the current President of the Philippine Pharmacists Association (PPhA, http://www.philpharmacists.org/). I like writing to Leonie, directly or even bcc, because she almost always gives a clear and intelligent discussion. This is her email to me, she gave me permission to post this:

I may not be one of those you are asking nor one of those invited to attend the foum but I would like to comment as a Pharmacist. On your questions;

1. Can the 2 drugs be combined; Paracetamol and Ibuprofen?

Answer : YES. but the combination must only be at an amount which will not go beyond the usual average dose of the individual medicine and specifically for the drug preparation discussed here, Alaxan FR, as contained in its formulation information has 325 mg Paracetamol and 200 mg Ibuprofen which are quantities that exhibit the analgesic-antipyretic and anti-inflammatory effects. Data on the studies of both drugs and even the interations checker for drugs dose not register additive nor synergistic effects which would be the usual basis in reducing the quantities of each drug when combined; the reason I saw why Unilab used the 325 mg and 200 mg respectively.

I am not sure if this is the objective of UNILAB in using this combination, I think UL can answer this better. I am furnishing Atty. Ochave a copy of this so he can ask their pharmaceutical chemist to answer this question.

2. It has to be taken NOT on an empty stomach.

Answer: YES, because this 2 drugs have gastric and intestinal wall irritating effects just like Aspirin or any other NSAID (Non-Steroidal Anti-inflammatory drug) preparation.

3. Is there value of the combination?

Answer: YES, as I've mentioned earlier if the specific cause of the pain is not identified. However if cause of pain is known, there is NO NEED, it will just be a waste of your resources given that the amounts 500 mg alone and 325 mg in combination with another analgesic ( like Ibuprofen) of Paracetamol and 200 mg Ibuprofen can exhibit analgesic or pain relieving effect already.

4. Additional comments as advise to users of these drugs:

> Both must NOT be taken for more than 10 days.

Nonoy, the Philippine Pharmacists Association major project for this year is actually on RATIONAL USE OF MEDICINES (RUM) which covers a number of programs. RUM is one policy statement reiterated by FIP our global organization in the India convention, given the very high incidence of medication error now. ,We can work together to better inform the public so any user of medicine as advised or prescribed by their physicians will be better informed on the medicine's proper use to get the optimum benefits from it . . this is exactly why I said the Pharmacists can help and support the doctors attain the therapeutic goal and consequently REDUCE the cost of the medication. The HIGH COST is also brought about by misuse and abuse in the use of the medicines for the simple reason that the user does not exactly understand how these medicines must be properly handled and used.

So, there. My questions have been answered, thanks again Doc Suzette and Leonie. It's rather troubling that  "there are far worse preparations that have been approved and these things sell too" as mentioned by Doc Suzette. I have very high regard for this lady since I've known her some three years ago. For one she's a scientist, a pharmacologist at UP College of Medicine; secondly, she's very down to earth, she has worked with us in our NGO coalition CHAT even if she is an academic.

Other physicians can give their opinions about this molecular combination. But I hope that Unilab, the manufacturer of Alaxan FR, will also revise their advertising and explicitly make the caution that such drug should NOT be taken on empty stomach. That's part of rational use of medicines.

Ibuprofen 400mg Tablets can also be used to relieve other painful conditions such as headaches, migraine, toothache, nerve pain (neuralgia) and period pain. It is also useful for reducing fever and discomfort associated with colds and flu.