Generic drugs are those medicines not covered by the patent protection and which are labelled solely by their international non-proprietary or generic name. That's the official definition in The Generics Act of 1988. Wiki also defines it as "a drug product that is comparable to brand/reference listed drug product in dosage form, strength, route of administration, quality and performance characteristics, and intended use... A generic drug must contain the same active ingredients as the original formulation."

The Generics Act will turn 24 years old this coming mid-September. And the drug price control policy will also turn 3 years and 1 month old that time. 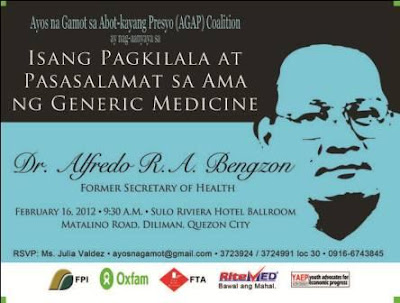 A local health coalition, the Ayos na Gamot sa Abot Kayang Presyo (AGAP), or Good Medicines at Good Price, http://ayosnagamot.wordpress.com/, in partnership with several organizations, will sponsor a talk by the DOH Secretary when the law was enacted, Dr. Alfredo "Alran" Bengzon next week. I was among those invited through our bigger health association, the Coalition for Health Advocacy and Transparency (CHAT), I will come.

The law has five goals why it was enacted:


To promote, encourage and require the use of generic terminology in the importation, manufacture, distribution, marketing, advertising and promotion, prescription and dispensing of drugs;

To ensure the adequate supply of drugs with generic names at the lowest possible cost and endeavour to make them available free for indigent patients;

To encourage the extensive use of drugs with generic names through a national system of procurement and distribution;

To emphasize the scientific basis for the use of drugs, in order that health professionals may become more aware and cognisant of the therapeutic effectiveness; and

To promote drug safety by minimizing duplication in medications and/or use of drugs with potentially adverse drug interactions.

I think these are good and clear objectives. It is clear that the law would not be looking at branded generics as purely "generics" because the latter emphasizes the scientific name of the drug molecule, not its commercial brand identify, even if the latter is manufactured by a pharmaceutical company, domestic or multinational, that produces 100 percent generic drugs.

As explained to me by Lyle Morrell of Watsons and Joey Ochave of Unilab on two separate occasions, the "generics" as contained in the Generics Act of 1988 refer only to "generic-generics". There are two other type of generics in the local market: (a) product-branded generics (Examples: Tempra, Alaxan FR, Biogesic, Solmux, Tuseran, etc.) and (b) company-branded generics (Ritemed, Unilab ba yan, Pharex, etc.).

Thus, the latter two would not be considered as "generic-generics" which again, is the main advocacy of that law. This may sound like discussion on semantics but it maybe important to clarify these things as certain sectors and players in the local health sector are confused and may not be aware of this distinction and their implications when it comes to strictly implementing that law.

Doc Alran has a wide experience in health policy, both public and private healthcare. He was DOH Secretary from March 1986 to January 1992, see the DOH's brief description of his term here. After his term as DOH Secretary in the late 80s, and a short stint as a Peace Negotiator, I think he never went back to the public sector. He is now the Dean of the Ateneo School of Medicine and President/CEO of Medical City. He has lots of insights as a private health practitioner and manager.

I wrote here one time, that he talked at one of the meetings of the DOH Advisory Council on Price Regulation more than two years ago, saying that drug price control policy is wrong. In their case at Medical City, he said that they are in the business of healthcare, to make sick people get well and go home, they are not in the business of drug retailing. By forcing prices of certain drugs to go down at a level that does not reflect the cost of dispensation, monitoring, replacing, monitoring, etc., their bottomline as a healthcare provider is adversely affected. He called the drug price control policy as a short-sighted, quick-fix solution that creates more problems than it solves and thus, requested that the policy be withrawn, or at least the policy should not apply in hospital pharmacies.

It seems that then DOH Sec. Francisco Duque ("DOH-K" was the slogan of the DOH in his term) was more of a politician than a healthcare professional. Advice like that, as well as the voices and representatives of the different sectors who are members of the Advisory Council -- local pharma, multinational pharma, drugstores, hospitals, physicians, pharmacists, consumer groups (like us) -- did not get into his ear. Then DOH USec Alex Padilla and NCPAM Director, Doc Robert So were there in that meeting. USec Padilla I think was not convinced of drug price control policy, but his boss, Sec. Duque, and their higher boss, then President Gloria Arroyo, wanted that policy for additional populism, he has no option but obey his bosses.

It would be interesting to hear what former Sec. Bengzon would say about the Generics Act, 24 years after it was passed. The event is free but it is by invitation only. For those interested, you may call and write AGAP.
-------