I am starting a new thread in healthcare, on Healthy Ageing and Caregiving, focus on household, private and civil society practices. My parents are ageing, my father is 84 years old, my mother is turning 78 and she has Alzheimer's disease, her physicians in Bacolod City confirmed this just two weeks ago to my elder sister, who is the main caregiver for both on top of her regular office work on weekdays. 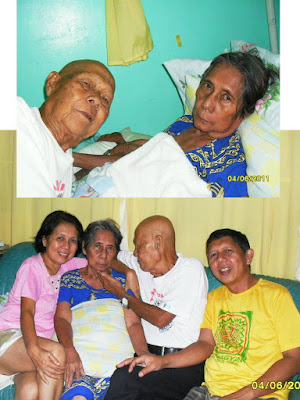 My mother when she was bed ridden for nearly two weeks due to frequent allergies and asthma last June 2011. My father and elder sister, the main caregiver, beside her. We were cheering her up and beat self pity, she has been complaining that her health is "hopeless."

My other sister here in Makati is the main financier for my parents' daily needs plus hospitalization when they become very ill. I chip in limited amount and it's not even regularly, when one of them has to run to the doctor again, or for some medications. Caregiving for the elderly and ageing parents here in the Philippines still rest mainly on the children and/or grandchildren, not on the government.

A reader of my blog wrote me late last year about their group, the Caregiver Village in the US, http://www.caregivervillage.com/social-media/ Here is the situationer that they give:

Despite millions of government dollars and hundreds of dedicated websites, family caregivers are in trouble.  With over 60 million family caregivers in the U.S. alone, many caregivers become sick (with nearly twice the rate of chronic illnesses as their non-caregiving peers); they’re depressed (40-70% report significant feelings of depression), they face a significantly increased risk of stroke, and they’re frustrated, unable to find resources or solutions they need to help with the enormous burden thrust upon them. They’re also costly to our economy accounting for an estimated $33.6 billion in lost productivity.

Family caregivers are exhausted, stressed to the point of illness and frustrated by their isolation.Caregiver Village’s virtual village creates a close knit community where caregivers can discover a sense of deep personal satisfaction – and escape – from the hard, intense work of family caregiving; while simultaneously learning how to handle their stress and building online connections with people in exactly the same situation as them. 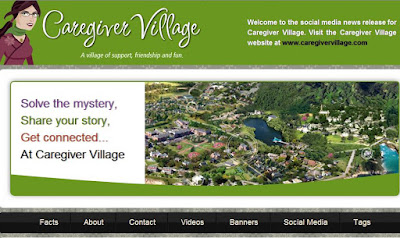 And so they put up the Caregiver Village, which I think it's a very good initiative. I am not sure if the "family caregivers" they are referring here are actual family members, or caregivers hired by the government to take care of the sick and elderly in private households. I would assume that like the experience of my elder sister in the province, they are referring to family members-caregivers.

I can relate with their situationer above. My sister would be texting me from time to time asking for prayers or other help as she's getting nervous and panicky sometimes.

In the US and other rich countries, I know that there are plenty of "Home for the Aged" which are mainly government-funded, a few are run by private charities and foundations. Here in the Philippines, those homes are still few because of cultural practices and social expectations of the children mainly taking care of their ageing parents. This still falls on the category of "healthcare as personal responsibility".

There is a growing trend here in the Philippines of "retirement villages" catering to more affluent elderlies, like the returning Filipinos from abroad, or targeting old and rich/pensioner Koreans, Japanese, Europeans, etc. These are sea-side villages with a modern clinic or small hospital, or at least near the more modern hospitals. There they can enjoy fresh air, tropical climate and a clean beach resort.

Healthy ageing is something that many of us would aspire for. Ageing 60s, 70s, 80s or older and still relatively healthyand not bed ridden yet. Sharing more information on healthy and more active lifestyle, perhaps not too active that might court bad physical injuries, that's something that we can at least do.
-------

See also the last issues of the other healthcare threads in this blog: