Malaria, dengue, tuberculosis, schistosomiasis, river blindness, leptospirosis, lymphatic filariasis, sexually-transmitted diseases (STDs), these are among the known tropical diseases that affect Filipinos and other people living in the tropics yearly. Many of them are infectious and communicable, usually by mosquitos and other insects, parasites and bacteria, and have no treatment or vaccines yet. Hundreds, if not thousands, are dying in the Philippines alone each year because of these diseases.

Yet the attention of many governments and even the WHO are on the lifestyle-related non-communicable diseases (NCDs). Even the DOH website, http://www.doh.gov.ph/ has little discussion about tropical diseases, more on NCDs. While it is true that the latter are now the world's chief killers, their isolation and control are mostly internal, meaning based on personal responsibility or irresponsibility, on how people takes care of their body and that of their households. I have argued in the past that government should focus more on infectious and communicable diseases because these can affect entire communities, and they are relatively easier to control than NCDs. 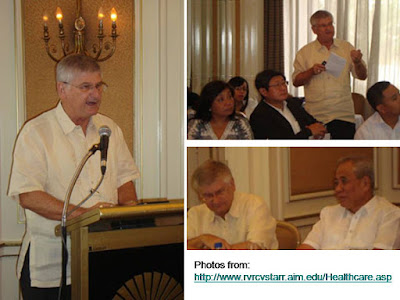 I am posting here two of the most recent articles by Mr. Reiner Gloor on "neglected tropical diseases" (NTDs). Reiner is the Executive Director of the Pharmaceutical and Healthcare Association of the Philippines (PHAP, www.phap.org.ph). This is the organization of mostly innovator pharma companies, enterprises that are often demonized by certain sectors over patents and other intellectual property rights (IPR) issues, and they fail to recognize the value of medicine innovation and the high cost, high risks of such undertaking. These groups are so focused on "cheaper medicines" and curative healthcare, than more powerful, more disease-killer drugs and vaccines.

Reiner did not mention the policy bias of governments towards NCDs in his two articles below, I only made that observation myself. Here are the papers, enjoy.
------------

THE WORLD Health Organization (WHO) has set a new target that would control, eliminate and eradicate a group of diseases that affects about one billion people living in poor tropical and subtropical countries.
By year 2020, the WHO announced its vision to end the misery caused by neglected tropical diseases (NTDs) that kill or disable millions of adult and children worldwide.

Since these illnesses affect poor countries, they likewise remain a contributor to a vicious cycle of poverty.

NTDs often lead to stigmatization and prevent children from developing to their fullest potential. Given their impact on patients, NTDs can no longer be ignored.

The WHO said that despite the complexity of NTDs, the targets are achievable. The health agency is confident that nine of 17 NTDs can be eliminated or controlled with adequate supply and distribution of medicines. This bold vision, according to WHO, requires further commitment to achieve the targets for control and elimination of NTDs.

Specifically, the WHO has set the global elimination of lymphatic filariasis (LF), blinding trachoma, human African trypanosomiasis (HAT or sleeping sickness), leprosy, and fascioliasis. On the other hand, onchocerciasis (river blindness) has been listed for regional elimination.

Elimination of the said diseases means that incidence of a disease in a geographical area is reduced to zero but continued intervention measures are still needed.

The control of soil transmitted helminthiasis (STH), and Chagas disease are, likewise, expected through continued intervention measures.
Schistosomiasis, on the other hand, is set for elimination by at least 75% of school-age children.

Apart from the availability of safe and effective medicines, success relies on a multi-stakeholder approach that integrates elements such as environmental improvements, capacity-building efforts, effective health policies, better screening, and in some cases, further research and development.

On the part of the research-based pharmaceutical industry, it recognizes that addressing such major global health issues like NTDs requires collective action from a range of partners. Until recently, these diseases were eclipsed by the global health community’s focus on HIV, malaria and tuberculosis, among others.

With leadership from the WHO, concerted efforts are under way to reduce suffering caused by NTDs, announced the International Federation of Pharmaceutical Manufacturers & Associations (IFPMA).

The global pharmaceutical industry is participating in the fight against NTDs by donating 14 billion treatments for 10 years to support the elimination or control of the nine key NTDs, representing more than 90% of the international burden.

The donations come in conjunction with NTD collaboration among pharmaceutical companies, the Bill & Melinda Gates Foundation, the US and UK governments, international organizations, and endemic countries’ national governments, added IFPMA.

Researchers are also working to develop treatments and vaccines for NTDs while clinical trials are under way for NTDs that need new treatments (schistosomiasis and hookworm, for example).

Furthermore, several vaccines for NTDs are in various stages of advanced development.

The second WHO report on NTDs confirms the important progress made in fighting NTDs and the significant role played by pharmaceutical companies that provide quality medicines.

Medicines play an important role in the global vision of controlling, eliminating and eradicating the burden of neglected tropical diseases that disproportionately kill or disable millions of mostly poor people around the world.
A turning point in the fight against these diseases was achieved following the World Health Organization’s (WHO) pronouncement of a new target that would control, eliminate and eradicate the misery caused by neglected tropical diseases (NTDs) by year 2020.

The new health goal triggered a life-changing pledge from research-based pharmaceutical companies with their donation of 14 billion treatments to help control or eliminate major NTDs.

The International Federation of Pharmaceutical Manufacturers & Associations (IFPMA) announced that the donations will target nine major NTDs representing more than 90% of the global burden.

The wave of medicine pledges is part of the continuing commitment of the research pharmaceutical industry in the fight against NTDs. As of January this year, the WHO reported that billions of treatments had been provided for free or are continuously being given without charge to patients afflicted by NTDs. (For details, go to www.ifpma.org.)

These include the donation of an unlimited supply of albendazole for LF until it is eliminated. Other efforts include the establishment of a consortium to free diethylcarbamazine citrate, a treatment which is given together with albendazole for some cases. LF is a severely debilitating and disfiguring disease caused by parasitic worms. About 120 million people in 72 countries are said to be afflicted with the disease.

The WHO also seeks the elimination of leprosy by 2020. Keeping the steady flow of medicine used for multi-drug therapy (rifampicin, clofazimine and dapsone) remains a key element in eliminating the disease. It is estimated that more than 14 million people have been cured, 4.5 million due to the drugs given free of charge.

River blindness is the world’s second leading infectious cause of blindness. The WHO said it has caused blindness in about half-a-million people. There is an ongoing commitments to donate the drug ivermectin to those who need it for as long as necessary.

Another disease that can cause people to lose their sight is blinding trachoma. About 84 million people suffer this bacterial infection of the eye. Environmental risk factors for transmission are poor hygiene, crowded households, water shortages and inadequate toilet facilities. The donation of the antibiotic azithromycin, in combination with other multi-stakeholder initiatives, hopes to eliminate it by 2020.

Meanwhile, up to 25 million children annually are expected to be free from STH with the provision of free mebendazole tablets. STH, also known as intestinal worm, affects mostly children and is due to one or more parasitic worms. It slows down a child’s physical growth and cognitive development. It is also one of the most common infections worldwide.

Schistosomiasis is another parasitic disease that can impede growth and cognitive development as well as damage internal organs. It is estimated that more than 220 million people are infected worldwide, of which almost half are children. People can get infected through contact with skin-penetrating parasitic worms in water. The donation of praziquantel is expected to benefit 100 million children per year.

Research-based pharmaceutical companies continue to donate melarsoprol, pentamidine, eflornithine, suramin and nifurtimox to help treat HAT, a parasitic disease that can penetrate the brain and cause daytime drowsiness or even death.

About five million nifurtimox tablets would have been donated to treat Chagas disease in 2017. Chagas is a parasitic infection which is more fatal among children. About 25 million people are at risk.

Also set for global elimination is fascioliasis which is also known as common liver fluke, a food-borne disease that is a concern in more than 70 countries. A single dose of triclabendazole is enough to treat the disease. It is given free of charge in endemic countries.

Meanwhile, research continues for the other NTDs. For example, the so-called "G-Finder" report on R&D investment in neglected diseases placed dengue in the number three spot in terms of investment by research-based pharmaceutical companies with $94 million of funding in 2010 alone. The report added that about $212 million was invested in dengue research from 2007 to 2010.

Apart from the availability of effective medicines, eliminating or controlling NTDs can be achieved through the collaborative efforts of stakeholders and the combination of elements that range from environmental improvements, capacity-building efforts, effective health policies, better screening and further research and development (R&D) in some cases.

For details consult your doctor or log on to www.phap.org.ph or www.phapcares.org.ph. Join us on www.facebook.com/people/Pharma-Phap/. E-mail the author atreiner.gloor@gmail.com.
--------