Free Trade 21: Abolish or Shrink the Bureau of Customs

Trade protectionism serves two main groups and vested interests: the protected domestic business groups or sectors, and the government. The former can raise their prices and local consumers will have no choice but buy from them since competing imported products are either not available or available but priced much higher due to government taxes (import, value added/VAT, documentary stamp/DST, etc.), related fees, and possible bribery paid to corrupt customs officials. 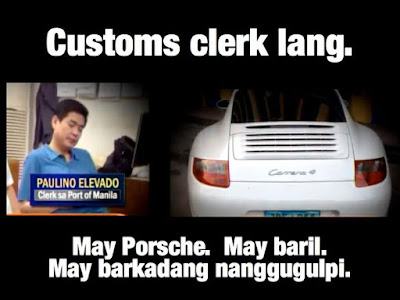 Yesterday and today, the local media and the web were treated to this scandal: a lowly clerk, with official monthly salary of P9 to 12,000, at the Bureau of Customs (BOC) was accused of inflicting physical injury, attempted murder, other cases. A month ago, he and his buddy beat up a student who alighted after a minor traffic altercation. When he went back to his car to get his guns, the student drove away and the Customs clerk shot his car several times.

The focus of possibly 99 percent of public discussion about it was on the arrogance of that supposedly lowly government employee, and the systemic corruption at the BOC. These are valid concerns as there was an attempted murder case. I will not pursue that angle as it is heavily discussed in the web, just google the name of the culprit, "Paulino Elevado" and one will get lots of materials about him and the incident. For instance, here are two stories about the previous complaints filed against him:


5share6963
MANILA, Philippines—An international trader of consumer goods filed before the Office of the Ombudsman charges against an administrative aide at the Bureau of Customs for allegedly asking for as much as P200,000 in bribe to facilitate the release of shipments.
The Department of Finance’s Revenue Integrity Protection Service said in a statement that Flor Tagle, an import and export consultant for Prima Modas Inc., sought help from the DOF’s anti-graft unit to establish the case against Paulino Elevado IV....
(2) http://www.tribuneonline.org/metro/20110223met4.html

02/23/2011
Mid-level officials of the Department of Finance (DoF) have filed graft and administrative charges against four Bureau of Customs (BoC) officials and several others before the Office of the Ombudsman.
Charged were Port of Manila Customs collector Rogel Gatchalian, Gatchalian’s staff lawyer Marlon Agaceta, special assistant Paulino Elevado, spot checker Reffy Gorre and 12 other respondents....

The BOC is the main agency to implement trade protectionism. BOC officials and even junior and low level staff can extort money from importers and brokers. All that these government personnel will do is to delay the processing of papers and release of shipments. Here are some stories of corruption and arbitrary powers exercised by these government personnel, from pinoyexchange.com:


This is what happens under trade protectionism. What could have been cheaper goods and services are made expensive by the government through different types of taxes and fees. Prices go up, quantity of goods and services go down, and the local consumers are worse off. 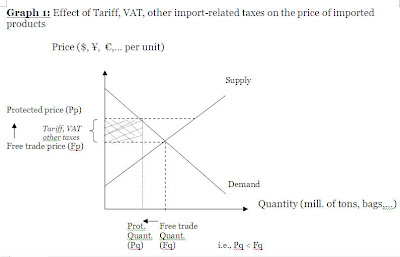 Yesterday, I posted the above photo/of Elevado in my facebook wall and made this note:


One more reason why we need free trade. Abolish or drastically shrink the Bureau of Customs. Remove all import taxes and restrictions, except on certain items like guns, bombs, poisonous chemicals, fake and substandard medicines, etc.

A friend asked where will government get the revenues, I replied


Internal revenues and taxes. When there are more imported cell phones and tv, more imported shoes and clothes, etc., there will be more shops, wholesale and retail here, govt can collect more VAT from more shops.

One good example of a unilateral free trade economy (ie, no need for trade negotiations, no need for WTO and FTAs, no need to hire trade negotiators, consultants and lawyers) is HK. HK imports via thousands of container ships, and exports via millions of shopping bags. Visitors from all over the world come to HK knowing that many things that may not be available in their home countries are available in HK. The tourism, hotel, mall, airline, local transpo and related industries benefit from unilateral free trade. Government corruption will be drastically reduced if the BOC is abolished or drastically shrank.

Another friend posted, "Mabuhay kay Commissioner Ruffy Biazon! But please give us regular updates on how your investigation (and punishment) is progressing so the public will know hindi ningas kugon ang leadership ng Customs!" To which I replied,


But I think the BOC is almost 100% corrupt or tolerant of corruption. When you see your officemates having very rich lifestyle, even if you are not corrupt, why don't you report them? You cannot, somehow "naaambunan" ka rin. Your silence to the pervasive and rampant corruption aids corruption. That is why we should have free trade and abolish or shrink the BOC. If you allow some bureaucrats to decide which goods will be taxed on different rates, such arbitrary powers will lead to robbery.

The arrogance and hypocrisy in the government, the BOC in particular, is sure to continue. You give some people the power to release or not release someone's importation, the rule of law culture in the country is weak, criminals and thieves in government are hardly caught and penalized, so you can expect that the corruption will just continue and expand. It may slow down a bit while public attention is still at the BOC, but it can speed up again in the coming days.

The long term solution to minimize if not avoid such arrogance and hypocrisy in government, is to have free trade. Remove the power to release or not release import shipment from some government personnel, except on a few items that can harm public security like importation of guns, bombs, poisonous chemicals and substances, addictive and harmful drugs, fake and substandard medicines.
-------