Socialism and liberalism are political ideologies that are poles apart. The former is advocating more or big government, little or no free market, and state ownership of all means of production, little role for private property ownership. The latter is working on the opposite side, advocating less government and a lean state, free trade and free market, more private property ownership, from personal items to means of production. Many other ideologies fall in between.

A few weeks ago, there were many news reports and commentaries about the Presidential Adviser on Political Affairs, Mr. Ronald Llamas, about his big purchase of fake DVDs. A few months before that, his SUV driven by his bodyguards while he was abroad was caught by the police as having long firearms and it created some scandal for Ronald. In the DVD purchase case, the issue was that a high government official is patronizing pirated products when the government is campaigning against piracy and should be protecting intellectual property rights (IPR) like the copyright of movies.

I do not want to go into details about those news reports and other commentaries, but I commented on a friend's facebook wall about the issue. My take is not so much about the pirated DVDs and IPR, I've written a lot about that subject, just search "On Intellectual Property Abolition" series in this blog.

Here is what my friend, Bonn, wrote:


I share (almost) the same argument and sentiment about the character and politics of Ronald Llamas.

I'm, however, saddened and worried about how supposedly critical media outfits, social observers, reformers, and even some in the progressive community have been easily drawn into the anti-reform propaganda and plot created by spin doctors. Hyping up, exaggerating, and spin-doctoring this recent DVD issue and the AK47 incident are obviously orchestrated by anti-reformers whose main objective is to remove Llamas, who is definitely a formidable force in the ongoing process and project for governance reforms and social change.


Ronald Llamas must continue working with the Filipino people and the reform government to realize real political reforms, economic development, and social welfare.

I am posting three commentaries posted in Bonn's wall.

(1) The article that Bonn shared, written by my former boss for more than 3 years in "Public Forum" (IBC-13's public affairs program) in the late 80s, Prof. Randy David.

12:57 am | Thursday, February 2nd, 2012
The price you pay for being in the public eye, I remember telling my old friend Ronald Llamas after he took the high-profile job of Presidential adviser on political affairs, is that you must avoid doing what every other person takes for granted as normal. Like buying pirated DVDs, or rummaging through fake branded goods and donated second-hand clothes at tiangges and ukay-ukays. Don’t smoke in public places, I told him. Observe speed limits. Never Xerox entire books; they’re protected by copyright. Don’t cheat on your taxes. Declare your assets faithfully, no matter how meager they are. Be careful about your personal life. You’re no longer an ordinary mortal: you’re now a government official....
There are very few like him, who are uncorrupted by political power or dazzled by its perks. Llamas clearly has the ear and confidence of the nation’s highest official. This role is as diffused as one can imagine it—a trouble-shooter, a “back-channel” worker, an emissary on sensitive matters, a strategist, an ideologue, a problem-solver—rolled into one....
This outsider to an entrenched culture of concealed criminality will probably not stay long in government, but he will always remain instinctively a socialist.
(2) An article written by another socialist thinker that Bonn posted in his wall:


.... This controversy is therefore a tale about morality—but not of the kind that David (PDI 2/1) suggests it to be (i.e. of an “outsider” succeeding in remaining good inside an evil world). For the issue of DVDs is not a simple question of personal virtue or law enforcement, but part of a broader clash between two moral claims: between a popular morality which effectively challenges private property, on one hand, and bourgeois morality which affirms it, on the other.

Llamas was caught up in this clash and it couldn’t have been easy, for he is both a card-carrying socialist, one viscerally opposed to multinational corporate greed, while also serving in the inner chambers of a state committed to capitalist accumulation. In fact, though rarely mentioned in the controversy, Llamas’ politics arguably helps explain why he is not particularly beloved in certain circles and why many will not be particularly unhappy to see him forced out of office....

For Llamas is now no longer exactly just an “outsider,” as David suggests; his position is rather similar to what the sociologist Patricia Hill Collins would call an “outsider within”: those who, like the black slave serving a white family, are part of—and yet not quite part of—a privileged circle. It is a position similar to that occupied by those who see themselves as revolutionaries waging a Gramscian “war of position” within the interstices of the state: They are not quite “inside” because they don’t ultimately wield power, but they are not quite outside as well, since they can, in this case, exert a measure of influence....

His other choice was to apologize in the hope of placating his critics, keeping his job. and continuing to have the “ear” of the President. But in so doing, he could end up buttressing the moral basis which prevents the kinds of redistributive programs that socialists should be fighting for, that bourgeois morality which considers buying DVDs from poor peddlers—but not the private expropriation of commonly owned resources through privatization, or the refusal to redistribute haciendas to the landless—as a crime....

But what good are all those reforms if, in achieving them, the capitalists’ moral fortress is stronger than ever? Waging the “war on position” against capitalist power is not only about changing the administration or revoking its policies; it’s also about challenging the very morality on whose basis they rule.

Llamas says he forgets that he’s no “no longer just a regular guy”; the hope is that he doesn’t forget that it is precisely because he is no longer just a regular guy that he is in a better position to fight for those who continue to be just “regular guys.” Because if outsiders within can’t fight for those outsiders outside, then Llamas and others like him may well look indistinguishable from those inside.

(3) And this is what Bonn himself posted in reaction to my earlier point that socialism and liberalism cannot co-exist if there is no political opportunism involved: in either or both camps:

The irony about this supposed reform coalition under the leadership of 'liberal' government is that 'the economic' remains the exclusive turf of the neoliberals. The socialists like Llamas only deals with 'the political'.

Regarding the clean separation you're making between socialism and liberalism, I believe that socialists are also liberals 'politically', but NOT 'economically'. Ever since the struggle for political freedoms, socialists have fought for the curtailment of the absolutist powers and tendencies of the state or government. For the socialists, however, this political struggle for liberal freedoms extends to the struggle for social and economic rights, redistribution of wealth, and in making democracy (people power) also the driving mechanism of the economy.

Here now are my comments to the above points from socialists.

On #1, I personally know Ronald and Randy. I was a member of the Bukluran sa Ikauunlad ng Sosyalistang Isip at Gawa (BISIG), or the Federation to Improve Socialist Thought and Action, http://filipinosocialism.wordpress.com/, from its formation in 1987 up to about 1991. 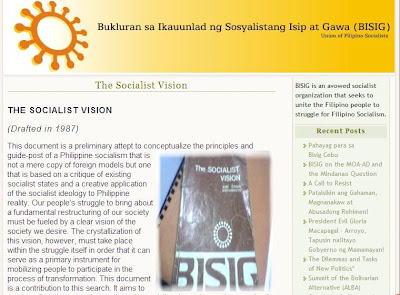 After restudying the market system and the various public finance data in the 90s, I was convinced that socialism is not going to work.

The entry of a number of socialists in high positions in a PNoy Liberal government was made possible by the lack of appreciation by the Filipino Liberals themselves about liberalism itself. I have observed that they have focused supposedly on good (but big) governance when liberalism is about lean governance and more individual freedom, less coercion and regulations.   Besides, most socialists really want to be in government because of their deep desire towards more coercion and regulations, more subsidies and freebies, more taxes and fees to do more social engineering and economic central planning.

And that is how socialists and liberals are able to share the same bed in the current administration.

On #2, it is a good analysis, affirming what socialism and socialists are really fighting for -- to dishonor and disrespect private property ownership, physical or intellectual, under capitalism. The immediate goal of socialism is the expropriation of the property-owning "class" and the abolition of private property system of key means of production. Socialism, therefore, is social ownership (via the socialist state) of the means of production -- land (residential, agri, industrial, commercial), factories, banks, schools and universities, hospitals and healthcare, and so on.

If almost all productive resources are owned by the state, then there is no more liberalism and liberty for individuals, households and private enterprises. Socialism is also about central planning -- how many houses to build, how many school buildings, clinics, drugstores, pizza house, burger shop, etc. to put up. No room for spontaneity and diversity in business competition. In short, socialism will ultimately lead to dictatorship and totalitarianism, that is why I abandoned being a socialist since the 90s.

So how can liberals live with socialists in the same administration? Only if liberals are not fully mindful of what liberalism is really standing for and deep inside, they want certain aspects of socialism which allows them to wield more political and economic power in society.

On #3, That's the irony of big government. Liberals vs. Nacionalistas vs. Democrats/PDP vs. Lakas vs. Populists/Masang Pilipino vs. other political parties are fighting only on personalities and their standard bearers, but philosophically, they are one and the same in having more government -- more bureaucracies, more regulations, more subsidies, more taxes, more debts. When heavy indebtedness kicks in (20 percent of the total national budget is for interest payment alone, principal amortization not included yet) to build up to a huge government failure someday, they blame the neo-liberals, the neo-capitalists, and who else -- neo-socialists, neo-communists, neo-cons, neo-fascists, other neo-neo?
-----------

Thanks Noy! As always, you're thoughtful and engaging. Cheers! :)