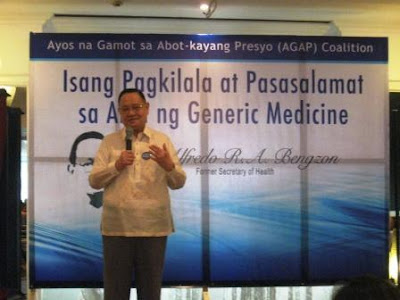 Dr. Alfredo "Alran" Bengzon at "3/4 of a century old" remains very sharp intellectually. He actually looks like late 60s, he has no white hair, unlike me, maybe he simply dyed it. Wisdom and humility is very obvious in the way he speaks: mild, clear and emphatic at times.

I attended a forum yesterday on Access to Medicines: Reminiscing the Past to Pave the Way for Universal Health Care sponsored by the Ayos na Gamot sa Abot-kayang Presyo (AGAP) Coalition held at Sulo Riviera Hotel, Quezon City. The event was co-sponsored by many other groups like the member-NGOs and POs of AGAP, and RiteMed/United Laboratories (Unilab). 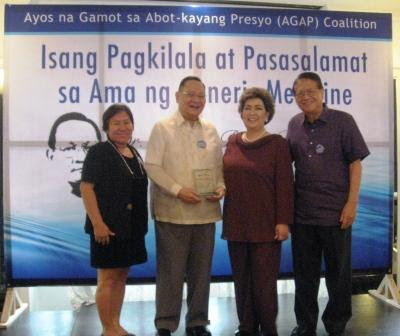 The speakers before Doc Alran were:
1. Maria Mendoza, Executive Director of the Fair Trade Alliance (FTA), another coalition that is composed also of similar NGOs that belong to AGAP. She gave the Welcome Address.
2. Former MOH UnderSecretary Rhais Gamboa, now VP of Unilab
3. Olive Parilla of Homenet Philippines/PATAMABA, a member-NGO of AGAP (leftmost in this photo)
4. Elpidio Peria of BITS Policy Center, General Santos City, and
5. Susan Roces, Ambassadress of RiteMed, a famous actress many years ago (2nd from right). She repeatedly announced "Mag RiteMed na tayo." It was a big advertising for RiteMed/UL in the forum.
AGAP Convenor and former Senator Bobby Tanada rightmost.

The last three speakers gave testimonials on "How generics helped improved their living conditions/access to health". 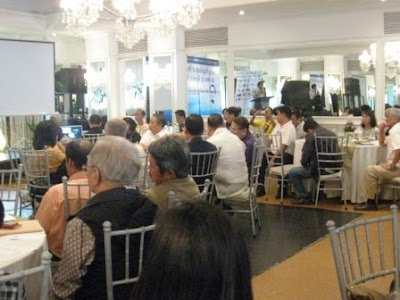 I like Dr. Rhais Gamboa's presentation, Rise of the Generics: 1st Endeavors on Access to Medicines. Rhais was the UnderSec. of the Ministry of Health (MOH) from 1986-92 during Doc Alran's term. He defined "access" to medicines as composed of three factors: information, availability, and affordability. Access to information means people know the chemical or molecular name of the medicine, the various products and preparations, etc. Availability means the drug is available and present in the nearby drugstore or pharmacy, not in far away drugstores. And affordability means the price is not high, or consumers have options to choose which among the various brands and preparations are more affordable to them.

Then he discussed the National Drug Policy (NDP) that was formulated from 1986-1988, and the Generics Act of 1988 was part of it. He said that the 4 pillars of NDP were:
Q uality medicines
R ationale use of medicines
S elf-sufficiency, and
T tailored procurement (block purchase by the government to influence the downward shift of drug prices)

He defined "generic drugs" as a copy of an original product whose patent has expired, and the chemical make up of a drug is highlighted rather than the brand name which the drug is sold. Nice. He also showed some data on the sale of generic drugs: from January to November 2011, the total Philippine pharma market was valued at P126.6 billion, but sales of "pure generics" or "generic-generics" was only 4.4 percent of that. Very small, the bulk of generic drugs now are the "product-branded generics" and the "company-branded generics".

I think Rhais forgot to mention that of the 5 programs above, the first two are mandatory discounts given by private players, not a single centavo came from the DOH budget for these programs. No. 5 is also additional requirements for private drugstores, government drugstores like BnB and Botika ng Bayan (BNB) and PITC drugstores are exempted, or are not threatened with closure if they do not comply with the EDPMS. Only nos. 3 and 4 get funding from the DOH budget.

Now to Doc Alran's talk, delivered extemporaneously. He said that prior to 1986, he has no previous government position outside of the UP College of Medicine. When she was approached by then President Cory Aquino to head the MOH and its 62,000+ personnel nationwide, he said he needed time to think about it, and Cory replied, "Yes you have time to think, by tomorrow morning start your work at the MOH." Funny, right. His father who has served in the government's all 3 branches (Executive, Legislative, Judiciary) adviced him with only two words: service and patience. Good. 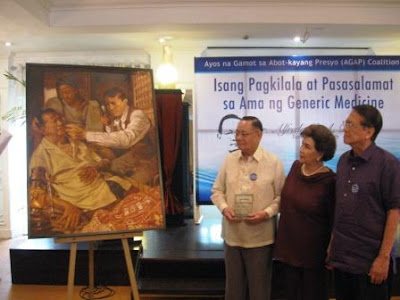 He proudly declared that if "If you don't become a senior citizen, your life and education is incomplete" because life is a cycle, the University of Life and Hard Knocks give you more challenges and experience than one would get by just reading. And if he is to write his lesson in life all these years, he would entitle it as "People, Politics, Process, Rights and Responsibilities." That's cool, right? Rights and responsibilities, entitlement and obligations, these two are inseparable. For me, only the lazy and welfare-dependent, subsidy-seeking and unreliable people would demand only "citizen rights" without recognizing citizen and individual responsibilities and obligations.

Here is Doc Alran's definition of "politics" which he admittedly thought was a dirty word before he joined the MOH. After all those years, he no longer considers the term as "ugly" but rather neutral:


Politics is a process by which a person, an organization, a community or a country clarify their values, visions and priorities, mobilize themselves to make their visions become a reality.

Hmmm, I think it's indeed a neutral definition of the term. Politics is indeed happening everywhere, even in private enterprises, in voluntary organizations, in the households, among friends.

On healthcare, he believes that there are four blocks involved:
1. Beneficiaries (patients, the public)
2. Providers (individuals, enterprises, institutions like doctors, hospitals)
3. Enablers (suppliers like pharma companies), and
4. Funders (public and private like PhilHealth, HMOs, donors)

There are several instances that those blocks can be in conflict with each other, and so government comes in as a referee, supposedly to harmonize or minimize conflicts. But government can lean to one or more blocks. When he was the MOH Secretary, he crossed path with the "high priests" of the Philippine Medical Association (PMA), the Drug Association of the Philippines (association of pharma companies and predecessor of PHAP) sued him in court, the pro-American bases groups and individuals castigated him, and so on. So that when he ran for the Senate in the 1992 elections, these animosities were hurled against him. "Looking back, if I had the chance to do it again, would I run for the Senate again? Probably Yes, but next time, I will be wiser." Cute reflection.

Now here's a damper, perhaps even to the campaigners of generic drugs: Doc Alran thinks that healthcare is mostly common sense. When Medical City got an award in Seoul for their successful campaign against H1N1 virus, he said that their advice to their patients and the public were very basic: (a) wash your hands often, (b) cover your mouth when you cough, (c) drink lots of fluid, and (d) get lots of sleep. Just boost and improve your immune system and the virus can be isolated, if not defeated. Medication of course will be needed when the virus is in an advance stage.

He narrated a case of a rich woman who insisted she needed an EEG for her frequent headache, he told her that it was just a case of tension headache, but the woman insisted to undergo diagnostic tests as money was no problem for her. Upon further digging the case, he discovered that the woman's problem was her mother in law who kept telling her that she will go to hell if they ever do family planning, they already have 8 children. The woman also narrated that Doc Alran was the 7th neuro-surgeon that she has consulted but it was only him who spent time with her digging about the problem. The other physicians, they just listened briefly then gave prescriptions. Doc Alran spent about an hour and a half listening to the patient, giving advice, later gave her medication with instructions that dosage should be declining and stopped after two weeks. After that period, the woman wrote to him that the headache is gone, even if she has stopped taking the medicines. And he asked some provocative questions to the audience:

1. Who helped that lady to cure her tension headache problem? -- She herself, not much the medicines or the neurosurgeons.

2. Do we need medicines in the first place on certain illness? -- Not all the time, like Vit B complex and other supplements, they can be derived from our food, no need to run to the drugstore or the DOH, to ask for "cheaper drugs" or "free drugs".

His talk lasted for more than an hour, started around 12 noon and stopped past 1pm. But it was so engaging that the audience probably did not feel so hungry, me included; well, there was a late morning snack served. In a sense, Doc Alran talked beyond medicines and healthcare. He talked about rights and responsibilities. If we extend it, health is an  individual right, but health is also an individual responsibility, right?

I gave Doc Alran a copy of my book, Health Choices and Responsibilities. I wrote in the dedication something like this:

I really enjoyed your talk today. And this book coincides with your message. Health rights and health responsibilities. Hope you'll like it.

Beyond medicines, beyond generic drugs, good health is about personal responsibility, healthy lifestyle and proper diet. Preventive healthcare is more important than curative healthcare. I hope that the public don't get hooked with too much focus on "cheaper medicines" or even "free medicines" courtesy of taxpayers' money. We need to look inwards -- various health choices and responsibilities we can take -- before looking out and demand various government interventions -- health rights and entitlements, high taxes to main such entitlements, drug price control and related measures.