The debate on raising taxes on tobacco and alcoholic products is heating up again, and this is good because the proposal is targeting two major but separate objectives: improve public finance and public health.

I am in favor of raising such tax, but not at very high rates. The main consideration should be finding the optimum, not maximum, tax rate based on multiple goals advanced by the advocates of such proposal. I developed a graph for this argument below. But before my longer discussion, I am posting two reports here.

The DOF says government will raise an additional P60 billion in revenues by restructuring the existing excise tax system on cigarettes and tobacco. The agency proposes to raise tax rates on these “sin” products by as much as 1,000%.

What this means for ordinary consumers is that, within the next two years, the excise tax collected per pack of cigarettes will rise from the current P2.72 to P30. The price per pack of cigarettes will rise, in two years, from around P40 to somewhere close to P100. What this means for me, in particular, is that I will finally kick the habit. If I do that, government revenue from me in particular will drop from P2.72 to zero — not the P30...

Under the current excise tax structure, government was able to raise P31.6 billion in 2010 from the tobacco industry alone. That is more than the government estimate of P25.8 billion in excise tax collections....

A World Bank study shows that for every 10% increase in price, sales volume drops by 8%. That dazzling DOF estimate of raising an additional P60 billion from drastically jacking up excise tax rates assumed demand for “sin products” is inelastic. We know, however, demand for these products is the most elastic since they are not vital for subsistence....

Today, there is this news report about raising tobacco tax in Congress.

By Lois Calderon, ABS-CBN News Channel
Posted at 02/22/2012 9:12 AM | Updated as of 02/22/2012 4:41 PM
MANILA, Philippines - The government wants to raise excise tax collections and the biggest cigarette maker is fighting back. And some lawyers are not convinced about the government's plan.


The government wants to replace a 4-tier tax system with a single rate. It says this will generate P60 billion a year.
Internal Revenue Commissioner Kim Henares said older brands whose taxes are based on 1996 prices will be the hardest hit. That means Philip Morris Fortune Tobacco Corp., the product of the 2010 merger of the American company's local operations with tycoon Lucio Tan's flagship business.


"Aside from the four tiers, there's annex D classification, where's there's price protection for certain brands, that whole thing will be removed... That Annex D which holds the majority of the market now will actually be eliminated," Henares said. "So if you look at it, it's really those brands in annex D that will be affected and not so much the Tiers 1, 2, 3 and 4."


Philip Morris Fortune Tobacco insisted raising their taxes won't boost revenue or reduce smoking, but will just push smokers to untaxed cigarettes. "To put it bluntly, today the lowest tax is P2.75 per pack. Under the DOF proposal, P30, that's over a thousand percent. That's unheard of... I see the impact even more because the illicit trade will grow exponentially," said Chris Nelson, the company's country manager.


Philip Morris Fortune Tobacco said the government should first plug tax leakages but has instead not responded to its offers to help. "One of Philip Morris system is Codent. It's for tracking and tax encoding and reconciliation. The secretary of finance said 'Come and see me. We'll discuss it.' We wrote, we offered it, no response," Nelson said.


The House of Representatives ways and means committee is currently discussing the reforms on the excise tax regime on tobacco and alcohol. Lawmakers argued that a single tax rate will shift demand to high-end cigarettes, whose prices would get closer to low-priced brands. Some of them think increased collections have a more important victim that cigarette makers -- tobacco farmers.


"I want to know which ... so I'd know how that will affect the tobacco farmers....If you can't convince me that farmers aren't hurt, I'm sorry but I can't go with your proposal," said Zambales Rep. Mitos Magsaysay, at a House hearing on Tuesday.
Quezon Rep. Danilo Suarez, House minority floor leader, added: "We're going to oppose this bill if without a comfort level to the tobacco farmers."


Higher excise taxes were on top of the list when the government last raised taxes in 2005. But the proposal was watered down, forcing the government to raise the value-added tax (VAT) instead.
My comments to the two papers above.

There are some truth to Alex Magno's comments. When you raise sin taxes (tobacco and alcoholic products) rather high, two things will immediately happen (a) demand will decline, even temporarily, which is a good thing for the campaign against smoking, but (b) smuggling will increase, and consumer demand will shift from the formal cigarette sources to informal or smuggled sources, and volume of demand may not be significantly different  from the original level, which is bad for anti-smoking, anti-heavy drinking campaigns.

To further illustrate this point, I made this graph today. By introducing a nearly 1,000 percent tax hike in tobacco products, the government (Congress, DOF, BIR, etc.) hopes to alter consumer behavior by shifting their current consumption from equilibrium price A to B (higher price, lower demand quantity) 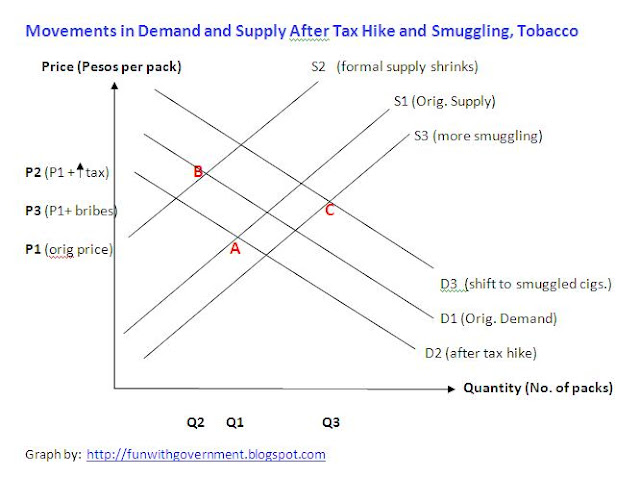 Since many smokers will not tolerate a big hole in their pockets, two things are likely to occur: (a) maintain volume (say, half pack or one pack a day) but look for cheaper alternatives, either the cheap and less-known brands or known but smuggled brands, or (b) endure higher price of their favorite brands but reduce volume (say from 20 sticks or one pack to only 5 sticks per day). So in the above illustration, equilibrium prices B (P2 and Q2) and C (P3 and Q3) can simultaneously happen, but it will likely be more on the C scenario. Why?

The guardians and implementors of tobacco taxation (from Congress to DTI, BIR and BOC, police and LGUs, etc.) are  people like us, and given the bad governance culture in the country, some of these guys can easily be bribed and smuggled tobacco, alcohol products can easily come in. Witness how the government implements anti-prostitution (ie, not just a high tax on prostitution but the practice is technically banned and prohibited), anti-harmful drugs, anti-gambling, etc. These vices are not just taxed, they are supposedly banned and prohibited, but they can be found in many places in the country. Mainly because consumer demand persists and government implementors are willing to accept bribes and tolerate these supposedly "illegal and prohibited" practices.

What is bad is that cigarettes that are very cheap but have poor filters, meaning more direct nicotine intake for the smokers, can get in more easily.

The bleeding heart argument of "negative effect to tobacco farmers" is not deep. If the huge tax hike will materialize, only the supply from formal tobacco producers will be adversely affected, but the supply from tobacco smugglers will increase. So the net effect on purchase from tobacco farmers can be neutral, or may follow the above illustration: instead of Q2, quantity supply may even move larger to Q3.

So I think the compromise solution is to keep the one tier or flat rate proposal but raise the tax by up to 200 percent perhaps, not 1,000 percent. The main consideration should be finding the optimum, not maximum, tax rate that can (a) raise government revenues, (b) reduce tobacco consumption and (c) reduce incidence of smuggling. People who do not agree with this proposal may propose not just 1,000 percent hike, but even 3,000 or 10,000 percent or higher. The next elections are just 14 months away, and some legislators who will work on the tax hike proposal will be needing the money of the big tobacco and alcohol industry players.

Finally, before I can be accused of being chummy-chummy to higher taxes, bigger government philosophy, I reiterate that government should drastically cut, if not abolish, income tax, personal and corporate, over the long term. Let people have more money in their pockets/savings account and investments. When the rainy days come, like getting sickly due to high past consumption of alcohol and tobacco products, they will have more resources to bail themselves out. After all, healthcare is first and foremost a personal and parental/guardian responsibility, not government's. Government responsibility in healthcare should be limited to infectious and communicable diseases, pediatric diseases, not to lifestyle-related ones like those caused by over-smoking, over-drinking, over-eating and over-sitting.
--------