Free trade simply means freedom of people to trade with other people. It is not the freedom of government trade officials, or the freedom of international trade bureaucracies (UN, WTO, foreign aid bodies), to determine and negotiate "in behalf of the people" how much restrictions, prohibitions and limitations to international trade can be relaxed in exchange for something.
The ugliness of trade protectionism is illustrated by this graph below. This is from a paper entitled "Obstacles to free trade: Thrashing protectionist logic" that I presented at the 3rd Asian Liberty Forum, September 11, 2006, Corus Hotel, Kuala Lumpur, Malaysia. It was jointly sponsored then by the Atlas Economic Research Foundation and the Friedrich Naumann Foundation (FNF).

Import tariff and taxes immediately raise the price of imported goods, making these as expensive as, if not more expensive than, the locally-produced substitutes. Having Protected price (Pp) higher than Free trade price (Fp), many consumers who would have patronized the imported goods are discouraged; but the protectionists get lower sales volume or quantity (Pq) as consumers buy less.
The bigger the gap between Pp and Fp, the higher the motivation to do smuggling. Trade smugglers are usually from among the politicians in power, or their friends. Thus, if the goal of the state and the protectionist business interests is to raise revenues for the government and to protect the local industries, smuggling defeats it. So more protectionism means more government corruption, especially in countries where the rule of law is not clearly respected and promulgated.
If free trade is respected worldwide, then over the long term, commodity price equalization (CPE) will happen, assuming that transport/shipping and related costs are low or zero. Below is an illustration of CPE.
Consider three group of countries:
Country A has rice surplus production every year (wide and flat riceland, good irrigation, few typhoons, good technology, small population).
Country B has rice deficit every year (mountainous and degraded land, poor irrigation, lots of typhoons, poor technology, big population).
And Country C produces no rice (industrialized and urbanized, imports many of its food requirement). 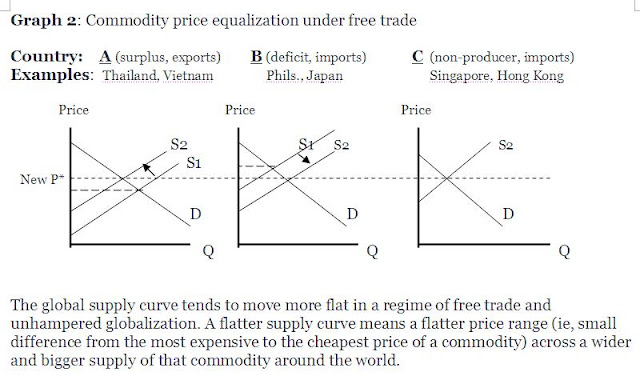 If trade is disallowed or at least restricted, country A will have very low rice price because of over-supply. Country B will have expensive rice because of under-supply. And country C will have very expensive rice. With free trade, there should be rice price equalization among the 3 as whatever surplus in A will be bought and imported by B and C.
Lots of discussions and negotiations at the World Trade Organization (WTO) are unnecessary if people fully understand what free trade really is. If I need a laptop, I do not make any conditionality to any laptop producer anywhere in the world, like they should not be hiring child labor, they should not be discriminating against women labor, they should be engaged in massive tree planting somewhere, and so on. None of that. I just want value for my money, a good laptop at my limited budget.
But the trade bureaucracies, like climate bureaucracies, labor bureaucracies, from national governments to multilateral institutions, have their own interests that are often in conflict with consumer interests. It is to the interest of these bureaucrats, in cahoots with protectionist, monopolist, and leftist interests, that real free trade will not happen. Otherwise, they will become jobless and powerless.
The folly of export subsidies and domestic support
One of the big ironies or contradictions in public policies by statists and economic central planners is that while they repeatedly announce they want cheaper and stable price for their citizens, they also dislike it when governments of other countries will do it for them.
When government of rich countries provide export subsidies and domestic support to their own farmers and manufacturers, their goal is to make their expensive exports become cheaper to consumers of other countries. So when the governments of France, Germany and the US will subsidize their exporters (using their own taxpayers' money of course) so that such exports will become cheaper to consumers in the Philippines and other poorer countries, why would the Philippine government complain?
Here's a graph that I developed while pondering on the craziness of export subsidies on one hand, and anti-dumping and/or countervailing duties on the other. 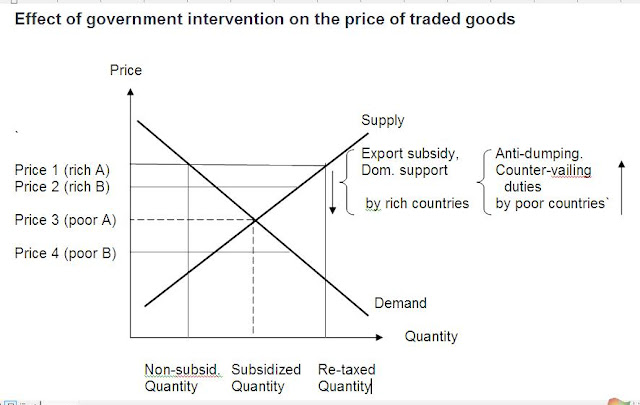 The goal of export subsidies and domestic support by rich countries is to make their exports cheaper abroad. That is, to bring down from Price 1 to Price 3. This way, they can help maintain their being an export powerhouse status and in the process, create more jobs at home. Consumers of poorer countries should be happy with this scheme.
But protectionist interests, anti-globalization and statist sentiments plus the itch to intervene by certain government bureaucracies, find this arrangement as "unfair". Thus, they invented anti-dumping laws, counter-vailing duties, or new import taxes to make the supposedly cheaper imported goods become expensive again. Isn't that idiotic?
Not satisfied with such idiotic idea of bringing up Price 1 to Price 3 again, they may even slap counter-vailing duties to exports by other poorer countries (China, Vietnam, India...) so that what could have been an even lower Price 4 will become more expensive, to Price 3 level.
Statists, protectionist businessmen, government trade bureaucrats, and even private/academic trade consultants, never run out of inventing or re-inventing new schemes to make free trade and real consumer empowerment an impossible dream.
------
On August 28, 2010, I wrote this:
Free Trade and Globalization Favored Asia

Free trade favors the efficient producers and penalizes the less efficient and protectionist-seeking ones. Or put another way, free trade penalizes the complacent and the lazy. And it is not the concept or theory itself that gives the verdict, but the people themselves, the consumers and buyers.

Over the past few years, natural increase in population and growing material wealth afforded by global capitalist competition enabled hundreds of millions of people to move across countries and continents. And when people move, their goods and services also move with them, or follow them. A number of Asian economies benefited from this new development.

The figures are very revealing, that many Asian cities benefited from freer trade -- at least compared to the protectionism several decades ago -- and expanded consumption capacity of more people around the world. The paper made this observation:

Singapore has now nabbed the top spot and every other big port in 1989 has moved down the list. Twenty years ago more than half of the top 20 container ports were in America or Europe reflecting imports into both regions from around the globe. Now, Asia's strength as an exporter is more in evidence. Fourteen of the top 20 container ports are in that region, with eight in China.

And since Dubai and UAE is part of the Asian continent, then only 5 of the top 20 biggest ports in the world are non-Asian (Rotterdam, Antwerp, Hamburg, LA and Long Beach).

One may wonder how come that Singapore with only about 4.7 million people, would have the biggest port in the world?

The quick answer would be tourism and foreign investmentts. If I remember it right, Singapore gets about 10 to 12 million tourists and visiting investors every year. Those tourists stay in hotels (big demand for construction and capital goods) and do a lot of shopping (big demand for consumer goods). Just like in Hong Kong, Singapore imports by containers, and "exports" by hundreds of millions of shopping bags from departing tourists.

Singapore, Shanghai and Hong Kong should be prime examples of the beauty of free trade, and why countries should embrace free trade and more capitalist competition. Not trade protectionism and bigger state business regulations and restrictions.