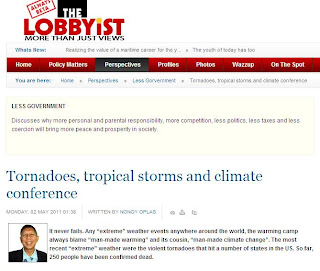 (This is my article today in thelobbyist.biz)

It never fails. Any “extreme” weather events anywhere around the world, the warming camp always blame “man-made warming” and its cousin, “man-made climate change”. The most recent “extreme” weather were the violent tornadoes that hit a number of states in the US. So far, 250 people have been confirmed dead.

Are the violent tornadoes rising and getting “more extreme” that many warming fanatics say? This table below is a quick answer, data from the US government itself. 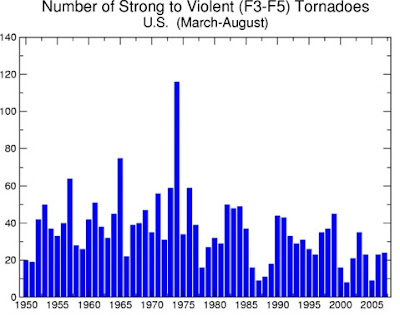 What about the tropics, are they right to say that the number of severe storms are rising? This second table provides the answer. 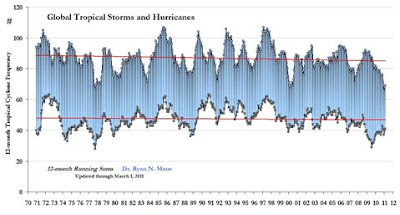 So the warming fanatics are lying when they say that violent tornadoes in the northern hemisphere, and the number of storms and hurricanes in the tropics, are increasing. Because based on the warming religion, because of “unprecedented, unequivocal global warming”, those weather events are supposed to become more frequent.

This coming June 30 to July 1, the Heartland Institute will sponsor the 6th International Conference on Climate Change (6th ICCC) in Washington, DC, USA. Details about the event can be found here, http://www.heartland.org/events/ICCC2011/index.html.

Heartland has been instrumental in exposing these shenanigans where political science is much stronger than their climate science. The past five ICCCs that it has sponsored, especially the 1st (2008, NYC), 2nd (2009, NYC) and 4th (2010, Chicago), were hands down success.

The United Nations has several dozen tentacles of international bureaucracies. The most famous of which in the climate debate are the Intergovernment Panel on Climate Change (IPCC), Framework Convention on Climate Change (FCCC), the UN Environmental Program (UNEP), and the World Meteorological Organization (WMO).

The UN headquarter is in NYC. So when Heartland organized the first two ICCCs in NYC, attracting some 700 international speakers and participants that openly question and challenge the UN reports and activities on climate, Heartland also invited key officials and lead authors of the UN IPCC, Al Gore and other warming leaders, the UN should have sent 100 or more out of its “thousands of warming scientists” to square off with those “ungrateful skeptics” who oppose saving the planet.

But no. The UN and top leaders of the warming camp have one standard reply to invites to big, open debates: the sound of silence. Not a single shadow from among the IPCC lead authors showed up.

Let us hope that they will have the balls to show up and challenge the skeptics of the “man-made warming” hypothesis.

Our think tank, Minimal Government Thinkers, Inc., again is among the international co-sponsors of the ICCC. We are the only Philippine-based organization that partners with Heartland and other climate realist groups in exposing the non-truths and half-truths of the warming hysteria and climate alarmism.

We invite our friends to attend the 6th ICCC. Especially those who are based in the US.

Let us put a stop to all these heavy politics of climate alarmism. Climate change is purely natural, in a warming-cooling-warming-cooling cycle. It is never man-made. Even if everyone in this planet will drive a car, global cooling is going to happen. Even if everyone will ride bicycles and all cars, buses and airplanes are thrown away, global warming is going to happen.
Posted by Bienvenido Oplas Jr at 11:28 PM