(This is my article yesterday in thelobbyist.biz)

Inequality is good because it respects and rewards hard work, efficiency and ambition. The self-driven, the self-reliant and highly ambitious among us will ultimately rise to the top because they are never complacent. They are always moving, constantly innovating and improving on old ways and technologies.

On the other side of the fence, there are people who have little or zero ambition in life. To drink and party everyday, to rely on some outside support – from parents, siblings, friends, government welfare, and so on – for their continued existence, these are their simple joys and complacency.

Between the two, and many others in the middle, inequality is sure to happen in the short term, and such inequality will widen over the long term.

Friedrich Hayek, the famous Austrian economist-philosopher, wrote in Chapter 3 of his book, The Constitution of Liberty (1960),

The rapid economic advance that we have come to expect seems in a large measure to be the result of this inequality and to be impossible without it. Progress at such a fast rate cannot proceed on a uniform front but must take place in echelon fashion, with some far ahead of the rest. 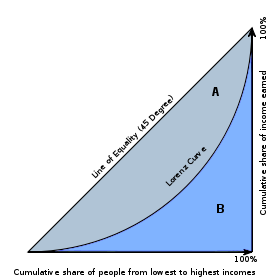 The highly ambitious, the highly innovative and inventive among us, are the key risk-takers in society. They are the ones who first invented the cellular phones, the computers, the flat tv, the new rice and corn variety, the new disease-killer drugs and vaccines. We see only the more successful products, and that is where envious eyes and minds are watching. We do not see the unsuccessful products made by other inventors which failed to show up in the shops, malls and supermarkets.

Here is Hayek’s additional position on the matter:

Improving the position of the poorest by giving them what we took from the wealthy, would temporarily quicken the closing-up of the ranks, it would, before long, slow down the movement of the whole and in the long-run hold back those in the rear. All obstacles to the rise of some are, in the long run, obstacles to the rise of all… To prevent progress at the top would soon prevent it all the way down.

The implication of this is that government policies of institutionalizing forced equality, of confiscating a big portion of the incomes of the rich and self-driven people so that government will have lots of money to redistribute to others is dangerous. The mistake rests not only in penalizing hard work, performance and being ambitious, but also in rewarding people who are in the “confiscate here, subsidize there” programs.

When the poor and initially less ambitious see that there are less entitlements coming, when there are less taxes, regulations and bureaucracies if they become hard-working and entrepreneurial too, then they will become more self-driven and independent, less dependent on politicians and the state. And society can progress even faster.

Continued programs and policies that reallocate people’s talent away from more innovation towards more forced income redistribution, is among the scourge of modern human civilization.
----