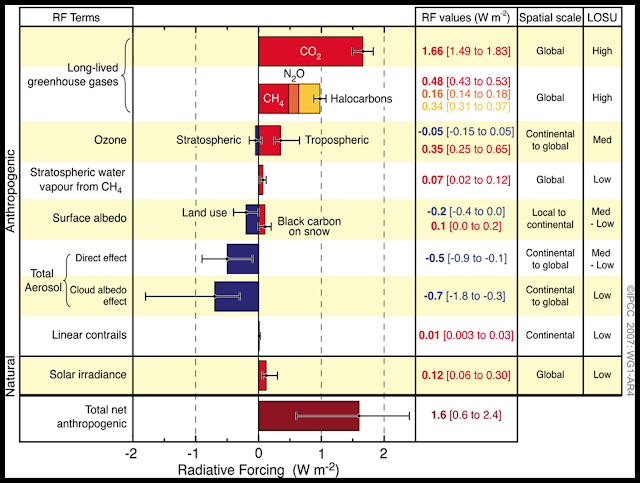 According to the IPCC AR4, net anthropogenic forcing was 1.6 W/sq.m. while solar forcing was only 0.12 W/sq.m., no other natural factors considered. In short, anthropogenic sources of warming was about 13x larger than the Sun's potential contribution. And the world said "AMEN" to the supposedly "scientific consensus". So, since humanity's modernization is evil, then the UN and many governments shall limit, over-regulate and over-tax energy sources that caused such "unprecedented global warming." 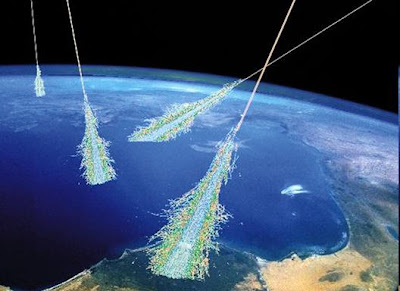 This "consensus" is challenged by more and more scientists (especially physicists, geologists and climatologists) since the IPCC has been producing its Assessment Reports, especially AR4 (released in November 2007). According to this group of scientists, the two main natural factors that the IPCC deliberately omitted and significantly underrated significance, are (a) galactic cosmic rays (GCRs, shown in this illustration), and (b) the Sun, as indicated by the TSI. (a) was omitted while (b) was underrated. 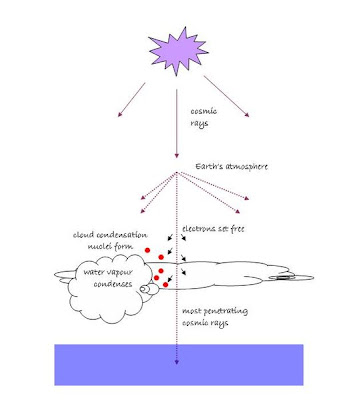 Now a famous climatologist, Dr. Roy Spencer, wrote yesterday, Indirect Solar Forcing of Climate by Galactic Cosmic Rays: An Observational Estimate. He admitted that before, he did not believe the GCRs-Sun-climate theory. But upon investigation of the high GCR count in Russia, he plotted the data with reflected SW (low cloud increase) and long wave (LW) emission, and he came up with this preliminary results:


for a 1,000 count increase in GCR activity as measured at Moscow, there appears to be:

The implication is that there is "a much larger role for Mother Nature in climate change than the IPCC has been willing to admit. And the greater the role of Nature in causing past climate change, the smaller the role humans must have had, which could then have a profound impact on future projections of human-caused global warming."

And here we are still stuck with fighting various governments' various energy and environmental regulations and taxation, upon the plodding and cheating by the UN IPCC, FCCC, UNEP, WMO, other UN bodies. Political science is proven once more, to be a lot more powerful than hard climate science.
----- 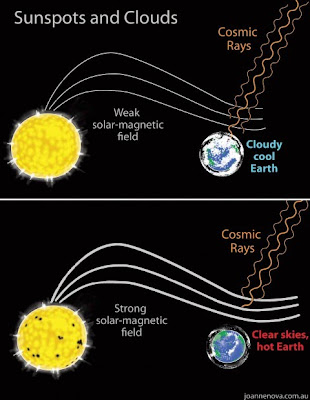 This illustration simplifies the relationship between an active (or inactive) Sun and planet Earth's climate of global warming or global cooling. This picture is from Something to be thankful for! At last: Cosmic rays linked to rapid mid-latitude cloud changes

The blog post is about a paper, "Cosmic rays linked to rapid mid-latitude cloud changes" by B. A. Laken , D. R. Kniveton, and M. R. Frogley. Portions of the Abstract says,

The effect of the Galactic Cosmic Ray (GCR) flux on Earth’s climate is highly uncertain. Using a novel sampling approach based around observing periods of significant cloud changes, a statistically robust relationship is identified between short-term GCR flux changes and the most rapid mid-latitude (60°–30° N/S) cloud decreases operating over daily timescales; this signal is verified in surface level air temperature (SLAT) reanalysis data.... These results provide perhaps the most compelling evidence presented thus far of a GCR-climate relationship. From this analysis we conclude that a GCR-climate relationship is governed by both short-term GCR changes and internal atmospheric precursor conditions. 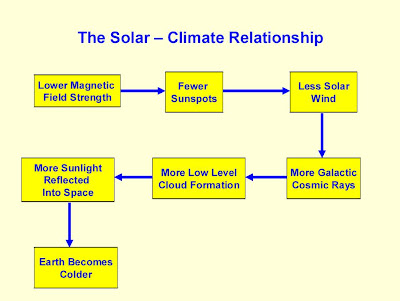 There you go. GCRs from exploding stars in the universe -- stars are born, stars are dying, endlessly, in our ever-dynamic universe -- help produce the "seeds" in cloud formation. More GCRs, more clouds, less sunlight, global cooling. This illustration explains it further. 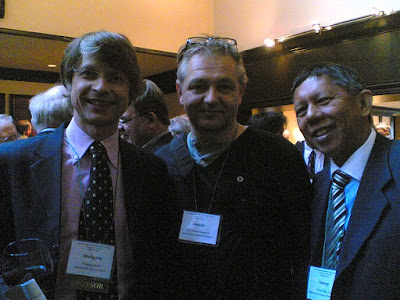 Henrik Svensmark from Denmark was among the physicists who made that theory. My picture with Dr. Svensmark last May this year, during the Heartland Institute's 4th ICCC in Chicago. He's in the middle. Beside him is a German friend, Wolfgang Muller of IUF-Berlin. 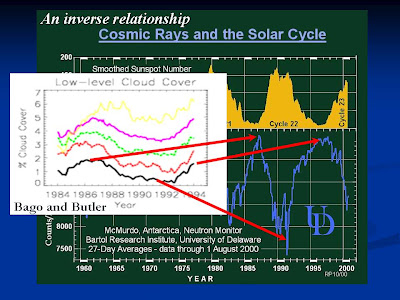 And here's a graph about the inverse relationship between GCRs and Sunspot number (SSN) in each solar cycle. Active Sun has more SSN, which reduces GCRs in the Earth's atmosphere, with reduces the cloud cover.

Most warmers are either ignorant, or are denying, the important role of the Sun on our planet's climate. They are so dead-set on ecological socialism -- more environmental regulations, more energy taxation, more carbon trading, more global junkets, more money transfer from rich countries to poorer countries, more climate bureaucracies -- with them as mediators.
------- 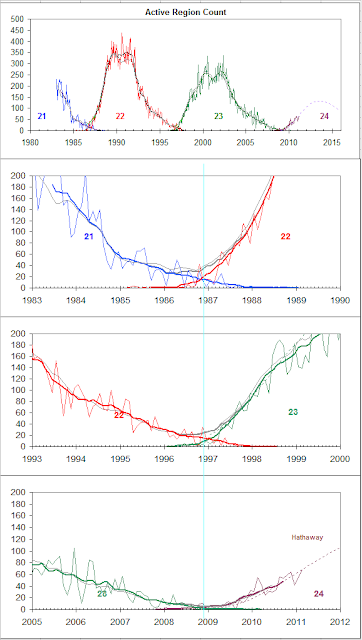 Current solar cycle (SC) 24 is now behaving almost exactly, if not weaker, than SC 5, the start of Dalton Minimum global cooling in the 1800s. With expected solar maximum of only 100+ TSI sometime in 2013-14, this is indeed a very weak SC. The comparison of TSI number, about two years after the transition from the previous SC -- in SCs 22and 23, SC 24 really shows a meek Sun.

Warming fanatics do not have this kind of literature -- the role of the Sun in the Earth's climate of warming-cooling-warming-cooling cycles. Solar data are publicly available, free, and updated daily or weekly. But fixation with the "evil CO2", a very useful gas that we humans exhale, a useful gas that our vegetables, rice, flowers and trees use to produce their own food, makes them ignorant about the Sun and other natural factors that can influence planet Earth's climate.

At 342 watts per sq. meter solar energy reaching our planet, it is indeed a huge source of warming. So that a reduction of solar power from 342 to only 340 w/sq.m. would have some significant effect on our planet's climate.
Posted by Bienvenido Oplas Jr at 12:15 AM