Yesterday afternoon, I attended the forum, Did the Philippines Sacrifice Human Rights in the Altar of Free Trade?, sponsored by the Friedrich Naumann Foundation for Liberty, FNF Philippines and the Ateneo Human Rights Center, held at Ateneo Rockwell, Makati, campus. 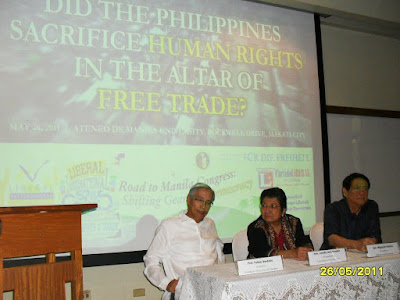 The speakers were Dr. Felipe "Philip" Medalla of the UP School of Economics (UPSE) and Foundation for Economic Freedom (FEF), Comm. Loretta "Etta" Rosales of the Commission on Human Rights (CHR), and former Sen. Wigberto "Bobby" Tanada of the Fair Trade Alliance (FTA).
Philip had an explicit NO answer to the forum title, Bobby had an explicit YES answer, and Etta I think had an indirect Yes. In my earlier discussion, Forum on HR, free trade and democracy, I also argued that the quick answer to the forum title is NO.
Bobby had a long, prepared speech, argument, why free trade is contrary to human rights. He cited certain rules of the WTO which disallow countries to protect their workers via certain "safety nets" and subsidies, as unfair intervention and dictation by the rich countries over poorer countries, resulting in more unemployment, more poverty in the latter. He also cited some economists like Joe Stiglitz and Paul Krugman for their critique of neoliberal policies by the WB, IMF and WTO imposed upon poorer countries. 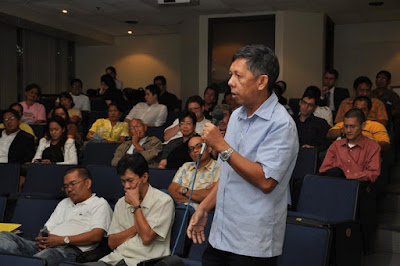 Of course I don't believe those arguments by him. So when it was open forum time, I was the first to raise my hand and asked the former Senator with two direct questions:
1. When people go to Divisoria, Baclaran, Quiapo, tiangge-tiangge to seek cheap, free trade price of various commodities, was there any human rights violation committed?
2. Many protectionists and statists criticize the WB, IMF, WTO, other multilateral agencies for their "neoliberal" and "Washington Consensus" policies. Do you support the abolition of these bodies then as you criticize them anyway? Many free marketers that I know of, are calling for the abolition of such international bureaucracies. 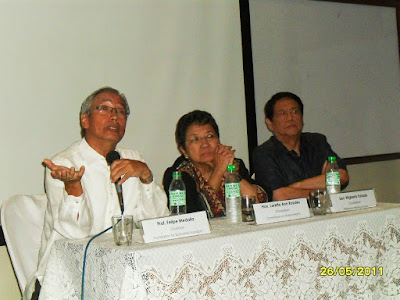 Bobby said trading in Divisoria, Baclaran, etc. involve smuggled goods that is why those goods are cheap. There are human rights violations there because more local companies and more local jobs will be threatened with extinction if more people will patronize foreign smuggled products. Government is also deprived of additional revenues which can be used to provide social and economic safety nets for the affected workers and small businesses.
He did not answer my second question though.
To illustrate the mistake of the above reasoning by the former Senator, I developed this graph below. Consumer surplus before and after free trade.
Consumer surplus is defined as the difference between the maximum amount or price that a consumer is willing to pay for a commodity, and the current or actual price of that commodity. For instance, a shopper loves a particular handbag that she is willing to pay P2,000 for it. Upon checking various shops from various malls that sell that particular handbag of same quality, she finds one, two or three shops that sell that handbag for only P900. That shopper then realizes a consumer surplus of P1,100. Thanks to competition among many shops and retailers. 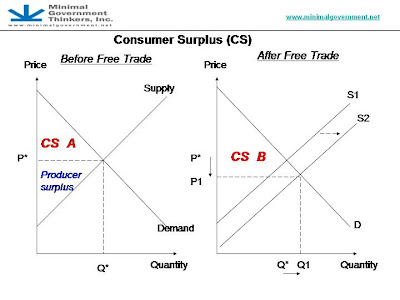 Free trade expands the supply curve from the original S1 to S2. This results in reduction of the price from the previous equilibrium price of P* (before free trade) to P1. Likewise, the quantity sold in the market expands from the original Q* to Q1. That's what free trade mainly does -- expand the volume and quantity of various goods and services that are available to the local consumers. Various suppliers and sellers from many parts of the world bring in their goods to the local market, and local consumers are happy with lots of choices. And protectionist philosophy thinks this is wrong.
What happens to consumer surplus? CS A (before free trade) expands to CS B (after free trade), or CS B > CS A (B is greater than A). This is good, not bad, right?
What do the consumers do with the larger consumer surplus? Most protectionist and statist arguments are silent on this question. They only think that the shift of consumer patronage from local producers to foreign producers result in the bankruptcy of the former, loss of many local jobs (that is why there are many Filipinos working abroad), and hence, more poverty. Wrong.
When a poor household benefits from rice free trade, so that what used to be P40 per kilo rice can be sold for only P30 per kilo, that household realizes a consumer surplus of P10 per kilo. If they consume 2 kilos per day, they realize a P20 per day saving on rice alone, or P140 per week. This household will not throw away that P140 per week consumer surplus. They will use it to buy an extra kilo of chicken, or extra 1.5 kilo of tilapia, or extra 3 kilos of vegetable X, and so on.
The lesson is that savings and additional CS from free trade will expand the consumption capacity of the average consumers even if their average household income remains the same. Instead of buying 3 kilos of chicken per week, they can now buy 4 kilos per week. Or instead of buying 4 kilos of tilapia per week, they can now buy 5.5 kilos per week, and so on. And this expands the market and consumers of chicken farmers, tilapia farmers, vegetable farmers, etc. Which creates more jobs for those sectors and sub-sectors, which reduces poverty.
Free trade is fair trade. Protectionism is unfair trade.
--------
See also:
Free Trade 10: More on Unilateral Trade Liberalization, July 15, 2008
Free Trade 11: Global Petition, Keynes, March 19, 2009
Free Trade 12: Trade and World Peace, April 28, 2009
Free Trade 13: Benefits of Dumpiing, June 16, 2009
Free Trade 14: Import Substitution, AFTA, China, January 08, 2010
Free Trade 15: Customs Bureaucracy, November 09, 2010
Free Trade 16: Price Equalization vs. Export Subsidies, May 03, 2011
Posted by Bienvenido Oplas Jr at 12:27 PM