Econ for statists 4: Supply curve of a monopolist

(I posted this last January this year, 3-parts short series. Now merged them in a single paper)

While it is true that the MC curve is also the monopolist's supply curve, it will not produce at just any point of that curve, otherwise it will not be making or maximizing profit. A monopolist chooses that single point where MC meets MR, not above or below the MR curve.

Tricycles are given monopoly routes on certain areas by the LGUs. Thus, jeepeneys, fx or buses cannot enter their route and pose any competition with them. The tricycle drivers set their fares, say P30 to P40 per trip depending on distance and the number of passengers. They cannot charge beyond P40 per trip, otherwise passengers would take the taxi and enjoy air-conditioned, comfortable ride than their bumpy, smoke-belcher and possibly dilapidated tricycles.

So a monopolist in this case still provides concrete service to the public, and they have to play with the purchasing power of the passengers, as well as the presence of the only (more expensive) competitor, the taxi.

A friend commented, "saying that a monopolist's supply curve is just a point (dot) on the demand curve is rather silly." 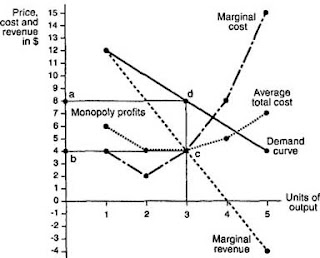 To help us on this, check this graph, from Cliffs Notes. To simplify the discussion, ignore the average total cost (ATC) curve, just look at the MR, MC and demand curves.

If it chooses to produce at outputs 1 or 2, it will be a "some profit making" monopolist as MR > MC.

If it chooses to produce only at output 3, then it will be a "profit-maximizing" monopolist as MR = MC = Q* where Q3 = 3 units in that graph.

So to say that "a profit-maximizing monopolist chooses only one point on the demand curve" is correct. Now if a monopolist that chooses to supply at various points of the demand curve other than Q* = 3 and still hopes to maximize profit, that to me is silly.

Joey is my friend and classmate from UPSE's Program in Development Economics (PDE) SY 1997-98.

Complication: Take note that the demand curve above is the total demand curve by all consumers in the market, as if one firm's output affects the price by lowering it with every additional output sold. But usually, the firm is a price taker just like other firms, then its demand curve is flat, equal to Price which is also its MR, which makes MR flat and not decreasing.

Now you know why most people hate microeconomics, there is always a confusing display of complex assumptions. 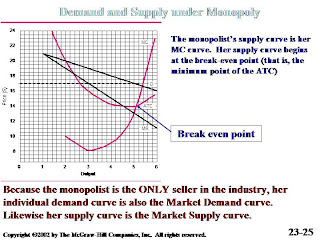 In Nonoy's first post 2nd paragraph regarding downward sloping Marginal Revenue (MR) curve, he pointed out that each additional input (capital/labor) brings in declining additional revenue. This is a mistake, but totally understandable maybe because these 'boring technical details' are easily forgotten. Additional input is additional cost thus increasing cost and reduces Profit (not revenue) = TR-TC. Maybe he meant additional or increasing input such as labor and capital will bring diminishing return (too many cooks in a fixed kitchen spoil the broth) in production or decreasing marginal product (not marginal revenue). With diminishing return (decreasing MP) so MC increases.

2. Now regarding Supply Curves: A firm's Total Cost (TC) is total cost of inputs (usually wage + rental/opportunity cost of capital). Marginal Cost is the additional cost for each additional output produced. The Supply Curve of one Firm is the MC curve or the portion of the MC curve above where it is cut by the Average Cost (firm is not willing to sell at a price (point in MC) that is below AC). Why is it the MC (also its) supply curve? Because the firm is willing to produce additional supply of output with a price (a point in MC) that reflects the additional cost with each additional unit produced.

Regarding Nonoy's statement that a monopolist supply curve is also a point in the MC. Well yes, because a monopolist seeks the point in the demand curve by tracing MC = MR. But oddly anyone can point also that it is also a point at MR. So it is actually beside the point. The correct point to clarify is that there is no such thing as supply curve for a monopolist because it does not rely on his firm's MC (the only MC which is supposedly the supply curve) because his output decision will rely also on the market demand (shape) curve. A point on the demand curve that shifts from time to time depending on the factors of demand is hardly a "supply curve or a supply point", it is just a point where MR = MC.

It is a mistake to say that a monopolist is "loss making" if it produces at MC > MR because it is still making profit as long as Price > Average Cost. Remember, marginal means we are referring to the 'last' additional output produce and sold, not the entire output produced and sold, therefore 'marginals' do not decide on profit loss and profit gain.

It is just not as big as the profit when MR = MC, but nonetheless it is not losing. Just a play of words like it is 'losing profits' relative to the maximum that it can make, but nevertheless it is still making a profit but not absolutely losing where cost is more than revenue or negative profits.
Posted by Bienvenido Oplas Jr at 10:07 PM