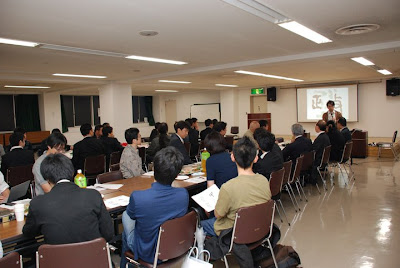 A big crowd who came last night. Hiroshi is the guy standing on the right. Hiroshi heads the Institute for Public Sector Accounting (IPSA) and the Free Economy Institute (FEI) in Tokyo. The core beliefs of FEI are: (a) free market, (b) limited government, and (c) (respect of) traditional Japanese values. 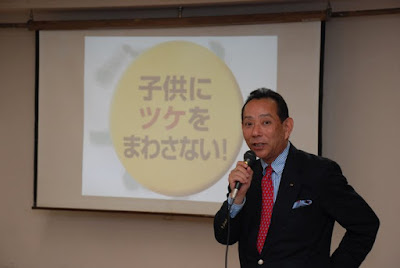 This is Mr. Masaru Uchiyama or simply "Mr. You", the President of the Japanese for Tax Reforms (JTR). FEI is a think tank, JTR is a taxpayers' movement but both work together. JTR's main advocacy is low and simple taxes in Japan. JTR is also a member of the Asia-Pacific Taxpayers Union (APTU). See my story about the recent APTU meeting in Bangkok last month.

Hiroshi and Mr. You are my good friends since 2005, when we first met in Phuket, Thailand during the Atlas-FNF Asian colloquium on Friedrich Hayek's book, The Constitution of Liberty. 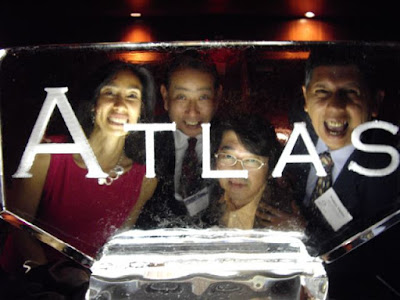 Our picture in Atlanta, Georgia, USA in April 2008 during the Atlas Liberty Forum. From left is Dr. Jo Kwong, then VP for Institute Relations of Atlas, Mr. You, Hiroshi and me. We miss Jo Kwong as she has moved to another institute, still in Washington DC, after more than 2 decades in Atlas cultivating many free market leaders in Asia and elsewhere, like Hiroshi and Mr. You.

JTR is not as influential as its US counterpart, the Americans for Tax Reforms (ATR) headed by Grover Norquist. But JTR plays an important role in Japan reminding the Japanese government that Japan's development and industrialization is due mainly to Japanese corporations, entrepreneurs and workers, not its government. Thus, the entities that produce the country's wealth should not be over-burdened by high and complicated taxes.
----