The Renewable Energy Act or simply the RE law (RA 9513) is proving more as another corrupt law that creates another cronyism, energy cronyism, in the country. I discussed in Part 2 of this Energy rationing series, at least two provisions of the law, the Renewable Portfolio Standards (RPS) and Feed in Tariff (FIT), ensure that the RE power producers have assured income and assured profit for up to two decades from the effectivity of the law, by forcing us energy consumers, to pay them high power rates.

Aside from those take-it-at-this-high-power rate provision, the law also provides a lot of give aways and freebies to developers and suppliers of RE power plants. Exemptions from income tax, from import tax, from VAT, accelerated depreciation, low realty tax, etc. 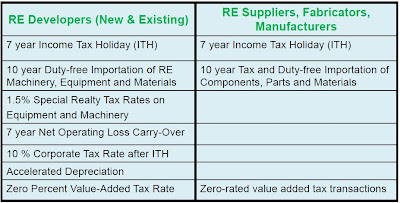 And aside from those companies not paying certain taxes, legally, they will also get cash incentives (transfers?) and financial assistance from us taxpayers. Hit us with even higher power rates, then hit us further with more taxes going to their companies and pockets. What else can you ask for?

I posted an earlier paper by Romy Bernardo, a BusinessWorld columnist, in Part 1 of this discussion series. Romy also criticized the FIT system.

Yesterday, another business columnist, also fellow of the Foundation for Economic Freedom (FEF), Boo Chanco, criticized the FIT. He wrote in Renewable energy, The Philippine Star, May 27, 2011.

Here is something to think about for us electricity consumers, already burdened by one of the highest electricity rates in the world. We are being asked to subsidize the cost of electricity produced by solar, wind and other so-called renewables through the mechanism of the so-called feed in tariff or FIT.

Unless we speak up, we will be forced to shell out some P9 billion every year for FIT for 20 long years… even after technology has made those renewables economically competitive. Of that amount, 50 percent goes to solar and wind, even if they will only account for 20 percent of the RE generated power under the FIT program.

There are those who say we have such a small carbon footprint and because we use significant amounts of geothermal and hydro, our electricity generation mix is already at least 32 percent renewable compared to the US which is under 10 percent. That means the Philippines is already contributing three times as much RE as the US on a country basis.


There is one person whose shadow stands tall in the crafting of the RE law and its implementation: fellow UPSE alumni, former Department of Energy Secretary (2001 to 2005), Vincent "Vince" Perez.
In one of his presentations as DOE Secretary then, he showed this in his 38-slides presentation, The Philippine Energy Sector, October 2004. Wind power was close to his heart then. 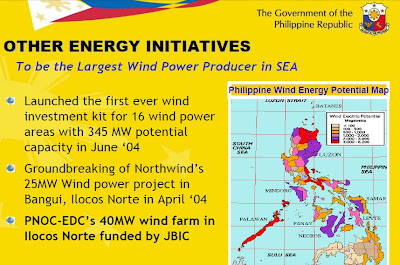 In June 2009, as a private citizen and businessman, he presented this paper at the ADB during a climate and energy conference there. He mentioned 3 of his concurrent positions then -- with Merritt, Alternergy and the World Wilflife Fund (WWF). Two companies in the wind energy business, and heading a huge environmental NGO that is pushing hard for RE like wind power. 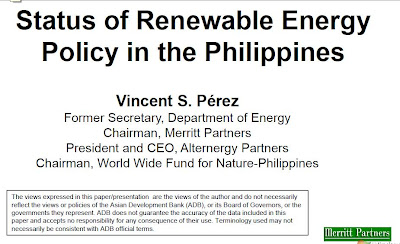 I checked today Merritt Partners' website, he remains as its Chairman. 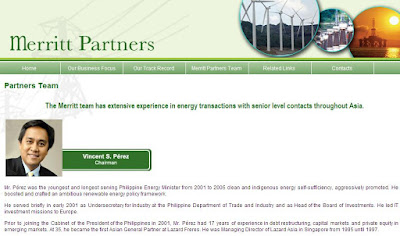 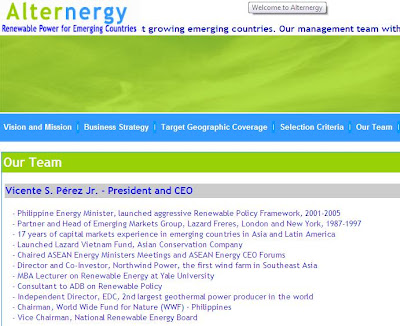 Two notable things here. One, he was the head of two RE companies, Merritt and Alternergy, that will benefit from the cronyism  of the RE law. Second, he is the head of a big environmental NGO, the WWF, that put constant pressure to policy makers to stick to the cronyism of the law.

Government should get out of playing favoritism and cronyism among energy producers. If things are indeed "free and renewable" with the RE power plants, then they should not be given any subsidy. But that is not the case. Those RE plants like wind and solar are NOT really free and renewable. The cost of putting  up just one huge tower for a wind turbine should cost six digits already.
Posted by Bienvenido Oplas Jr at 11:10 PM