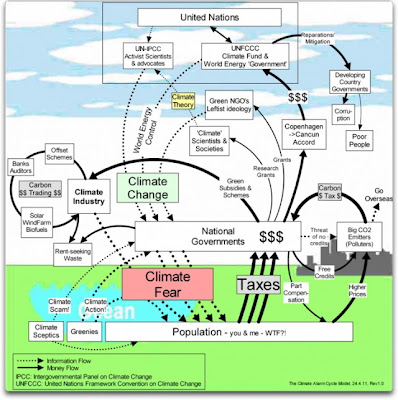 I have three comments on the illustration above.

2. The climate loans racket from the WB, ADB, EC, OECF, others were also not mentioned there. These are several billion dollars of loans to poor and developing countries for climate adaptation, climate mitigation, renewable energy, carbon capture and sequestration, etc. to "save the planet".

3. Thus, the above illustration is still tame. Many other international bureaucracies that feed on the blood and toil of people who have been grossly misinformed about natural climate cycles (renamed as "man-made climate change") were not mentioned there.

But overall, it's a good illustration. That is why I used it in this blog.

Meanwhile, the rainy season is already here in the Philippines, since last week or late April in some areas and provinces. Heavy rains were already experienced in Quezon City last Tuesday, another downpour tonight in many areas of Metro Manila.

In the literature of the "man-made warming" and its cousin, "man-made climate change" scam, the following are their proof and examples: