The Department of Environment and Natural Resources (DENR) is among the corrupt agencies in the Philippine government, though in my observation, not as corrupt as the armed units like the DND-AFP and the police (PNP), and the revenue agencies like the BIR, BOC and LTO.

Dr. Nereus "Neric" Acosta is set to be appointed as the new DENR Secretary next month, when the one-year ban from the last (May 2010) elections will end. Neric is a fellow UP alumni, he finished AB Political Science there, several years younger batch than me. He finished his PhD also in Political Science from the University of Hawaii. During his 9-years term as Congressman of the 1st District of Bukidnon province, I think he was the only legislator with a PhD.

Last May 11, Neric issued this statement:

TODAY, A WELL-FINANCED SMEAR CAMPAIGN WAS LAUNCHED AGAINST ME BECAUSE I AM BEING CONSIDERED BY PRESIDENT AQUINO FOR THE PORTFOLIO OF SECRETARY OF THE DEPARTMENT OF ENVIRONMENT & NATURAL RESOURCES (DENR).

VIA FULL-PAGE ADS AND OTHER MEDIA, THEY PUBLICIZED AN OLD WORN-OUT CHARGE FILED AGAINST ME 10 YEARS AGO BY MY POLITICAL RIVALS WHEN I WAS A CONGRESSMAN OF BUKIDNON.

WELL, MANY PUBLIC OFFICIALS HAVE PENDING CASES BEFORE VARIOUS COURTS, BUT A PENDING CASE IS NOT AN INDICATION OF GUILT.

I PROMISED PRESIDENT NOYNOY I WOULD CLEAN UP THE WELL-PLACED MAFIA GROUPS THAT ARE IMBEDDED IN THE DEPARTMENT OF ENVIRONMENT & NATURAL RESOURCES (DENR) – FROM THE ISSUANCE OF FAKE LAND PATENTS RESULTING TO BIG LAND SCAMS TO THE QUESTIONABLE GRANTS OF MINING AND LOGGING PERMITS.

THEY MUST BE AFRAID OF THE CLEAN-UP I INTEND TO DO.

I WILL BE STEPPING ON BIG TOES – BUT SOMEONE HAS GOT TO DO IT.

I WILL DO IT IF GIVEN THE CHANCE.

AS PRINCIPAL AUTHOR OF MAJOR ENVIRONMENTAL LAWS, I WILL PROTECT OUR ENVIRONMENT, BUT STILL ENCOURAGE THE MINING INDUSTRY TO GENERATE EMPLOYMENT THROUGH A BALANCED DEVELOPMENT PLAN THAT DOES NOT DEPLETE OUR NATURAL RESOURCES.

LASTLY, I WILL DO MY BEST TO RID THE DEPARTMENT OF ENVIRONMENT & NATURAL RESOURCES (DENR) OF THE ENDEMIC CORRUPTION OF SOME OF ITS HIGH-RANKING OFFICIALS THAT HAS DEEPLY AFFECTED THE SYSTEM AND DEMORALIZED HUNDREDS OF HONEST AND EFFICIENT CIVIL SERVANTS, IF GIVEN THE OPPORTUNITY TO SERVE.

This is good news, somehow. Although a better news for me, is to drastically shrink the DENR (and many other government departments and agencies, abolish some) to a few important functions. But to see a minimal or limited government at this time is next to impossible. So seeing corruption and extortion drastically reduced at the DENR is a better sight to see. 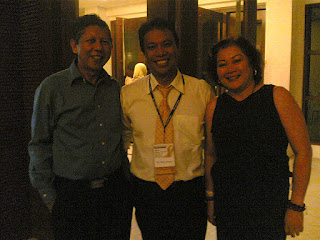 I know the family of Neric, I have known them since the 90s, so I can positively say that he comes from a non-corrupt family. His mother, former Congresswoman Coring Acosta, was a former scientist, has a PhD in Food Science. She was accidentally pushed in politics in the 90s and changed career then. His father, Juan, is a true blue farmer-scientist. Has PhD in Plant Genetics, really loves to plant, develop and grow various high-value crops, so people fondly call him "Dr. Tanum" (Dr. Planter).

A friend from one of my discussion yahoogroups reacted to the statement issued by Neric:


... His plan of cleaning the Department, especially the Bureau of Lands, against anomalous issuance of free patent in favor of land grabbers at the expense of our impoverish Kababayans deserve my full support.

I am in the private practice of law. Part of my advocacy is helping the landless and poor Filipinos fight land grabbers who are able to obtain titles anomalously through patents.

My experience is particularly disturbing on this matter, and since Dr. Acosta will address the problem of issuance of patent, I will fervently pray that President Aquino will appoint him the soonest in DENR.

I am helping pro bono nearly a hundred residents in Lumban, Laguna who were victims of this anomalous issuance of patent by the DENR. Worst, they were evicted/demolished from the land they are occupying as early as 1950s. After staying in their respective homelots for almost 50 years, they were evicted on basis of a free patent issued by the DENR to a land grabber who was not even in possession of the land, which is a common knowledge to many. We refer the matter to the Secretary of DENR, who promise us that a reversion proceedings will be filed, but to date no concrete action have been undertaken. The sad fact, hundreds were evicted from the land.

Same situation happened in my case in Zambales, where my clients bought a lot from a certain person who was an applicant of a free patent. However, his free patent was denied by the CENRO and instead a sales patent was issued in favor of another person. This grantee has filed possessory action against my clients and is even represented in court by no less than a retired Director of Lands who is now into law practice. This claimant was is very close to the Director which might be the reason, i suspect, why she was favored by CENRO. I really could not understand how the sales patent was issued in her favor, when there is a prior free patent applicant.

And lastly, my case involving more than 150 families in Barangay San Roque, Tarlac City. The residents have been occupying their respective homelots as early as 1950s as tenants of a landed family (not the Cojuangco Family). Thereafter, the family transfered the lots in a Corporation. Even with the transfer, the residents continued to occupy the lots and paid rentals until such time that the Corporation was dissolved and discontinued collecting. My clients continued to stay in the properties. However, in 2007, two person is claiming the land, and have filed possessory action against the residents. The latter are now in fear that in the near future they will be evicted. How these two came out with their titles is really a big question. We sought the help of PENRO especially with the survey and verification of the lots but to no avail. According to the personnel of the land managment services, since there is a pending case and a registered owner, they cannot meddle with the same.

I know that apart from these three cases, are many more similar problems with respet to the issuance of patents. The plan of Dr. Acosta, if appointed, to eradicate these problems, is for me, more than enough reason why he should be appointed.

I thank him for sharing with us his work experience.

This should be a big issue for liberals and people who believe in the liberal philosophy: If the state cannot do its very basic, very elementary, role of promulgating the rule of law, of protecting private property rights, why is the state into so many functions and programs that are secondary or non-essential as they can be provided by the private sector?

Neric is not a lawyer but it should be easy for him to get lawyers who can look into those land grabbing issues involving DENR regulations. What is important is the will, strong will, to promulgate the rule of law, to protect private property rights. Liberalism in theory and essence, supports capitalism more than socialism. Meaning more private property rights than social/collective rights whenever possible.

Neric the political scientist and former legislator, knows where he stands both on the philosophy and implementation aspect of property rights in the environment sector. I support his posting at the DENR. Although I do not support his position on climate alarmism, but it's another matter and is secondary to the bigger issue of protecting private property rights.

Good luck Neric.
Posted by Bienvenido Oplas Jr at 1:43 AM