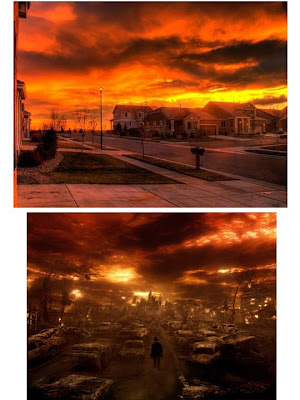 These are among the "scenarios" that would have happened yesterday, the May 21, 2011 "Judgment Day". Or in previous doomsday and Armageddon prophesies.

It should be safe to say that the same imagery will resurface again and again in the future, like the 2012 doomdsday. Some crackpots can be imaginative in painting a scary future and a non-existent past. The important thing for them is that planet Earth will end... soon... or the soonest time possible. They must be watching a lot of zoombie movies and Al Gore fiction documentaries? 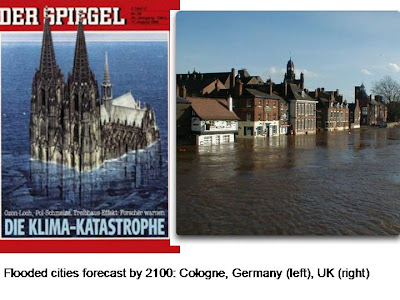 These are among the imageries by the man-made warming religion. These will happen just 89 years from now, by 2100. Or 200 years, or 1,000 years from now. The important thing is that this "will" happen. Courtesy of the UN IPCC, FCCC, UNEP, GISS-NASA (James Hansen kingdom), Al Gore, Arnie Schwarze, Leonardo di Caprio, and so on. 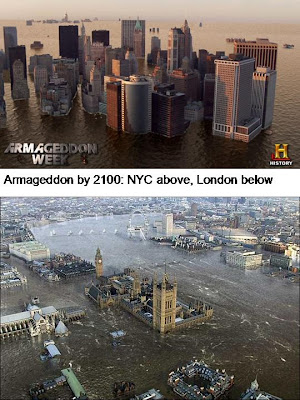 Another Armageddon imageries. This time, hitting the world's financial centers New York and London. Wait, the UN headquarters is in NYC. It should be the dark building on the left.

This will happen also in 2100? Or 200 years away? Well, GISS' James Hansen wrote in February 15, 2009: "If we burn all fossil fuels, we will destroy the planet we know. Carbon dioxide would increase to 500 ppm or more. We would set the planet on a course to the ice-free state, with sea level 75 metres higher...." (from The Guardian UK)

75 meters rise in sea level! We should indeed be scared and worried. Be very worried. Thanks to the UN and many governments for reminding us.
----