Healthcare and health financing is and will always be, an important topic anywhere. Economically, politically, scientifically, emotionally. It is understandable. Since late last week until today, my two daughters were sick. Life is abnormal for me whenever one of them will get sick as they are still young. So while I discuss health policy issues in this blog as objectively or academically as possible, I can be emotional when any of my family members, from my old and weak parents down to my young kids, would get sick.

Someone named Tony Shin suggested a site that gives good graphics about US healthcare spending. Four charts were posted there. 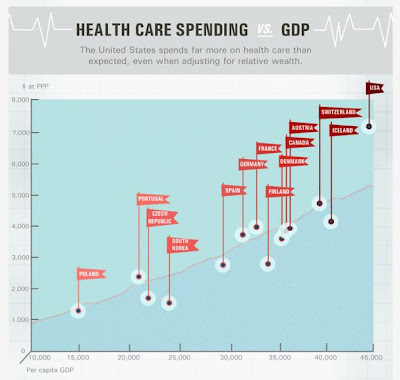 The chart artist/s added that "Not only does the US spend more than other countries. Our spending is way off the charts. Most wealthy nations spend similarly on healthcare. Americans spend much more." The basis for this statement and the above image is this chart below. 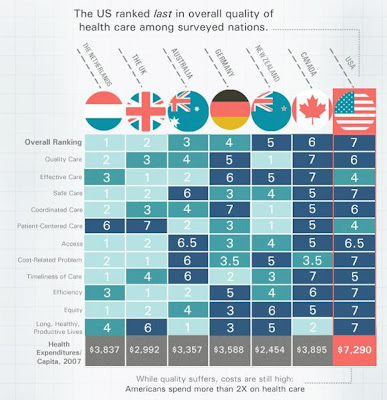 A number of persons who have some personal knowledge or experience about the US healthcare system that I have talked to, say that the culprit is medical "over-diagnosis" system. Which is a result of expensive health insurance, both for patients and medical professionals. I read that average cost of legal insurance paid by physicians is $250,000 a year. That's a lot. US physicians have to pay this amount to protect themselves from the legal hassle of being sued someday. For instance, an OB-Gyne can be sued of medical malpractice by someone whom that physician has assisted in giving birth 18 years ago

A Filipino physician friend who has migrated to the US told me the difference between the US and Philippine medical practice as something like this, say for someone who has a simple cough.

In the Philippines (and many other countries), a physician would physically examine the lungs (stethoscope), the tounge, throat, blood pressure, pulse rate, etc., aside from asking a few questions. In the US, a physician would request a blood test, X-ray, even a CT scan, before he will give drug prescriptions and other advice. Those diagnostic tests are the paper trails that a physician will hold on in case a patient might sue him later for whatever medical malpractice charges. And those diagnostic tests would easily shoot up the cost of healthcare, while the physician will charge high to reflect the high insurance premium they pay for the insurance industry against possible medical malpractice litigations in the future.

My Filipino physician friend added that if one sees a person lying unconscious on the street or being hit by a car, he/she cannot just assist the patient because if something happens further to that patient due to mishandling by the good but untrained samaritan, the latter can be sued in court by the patient later.

A highly litigious society like the US, supposedly to protect patients, can actually hurt patients and their family members because of those legal issues and high medical costs.

One more proof why inviting government to have bigger role and intervention in healthcare delivery can create more adverse, unintended consequences to the public.
-------

Most expesive, sure. Overlawyered, absolutely. Full of people who demand anything and everything and expect it to be "free." Sure.

Worst in the world because, as I've seen this report quote, “The most notable way the U.S. differs from other countries is the absence of universal health insurance coverage”

I would hope a libertarian would be the last person to fall for that kind of argument. That kind of propoganda comes straight out of a Michael Moore movie.

Thanks Todd. That quote, “The most notable way the U.S. differs from other countries is the absence of universal health insurance coverage” -- where did it come from? I did not find it in the 4-charts original posting. And neither did I say it.

I do not support government-provided universal health insurance. As I repeatedly argued in my articles on health policy in this blog, healthcare is first and foremost a personal and parental responsibility, not government responsibility.

I looked for articles that went with that pic and found

What always gets to me about these kinds of "studies" is that it's an inferior health care system that supposedly prevents people from spending $100 for a doctor visit, rather than a month worth of cable TV.

Life is choices. There are plenty of government programs already that get poor people health care. On top of that, most of the "poor" people here seem to have plenty of money for things like expensive phone plans, or expensive cable TV, but not the basics?

When the dictators of the world quit coming to my state of Minnesota for health care, then I'll start beliving we have an inferior health care system. It costs a lot, too much with all the payoffs to lawyers, but we are tops in the survivability of about every disease there is.