The attack against intellectual property (IP) and IP rights (IPR) is coming from all directions, particularly from the socialists (social and collective property rights, not private property rights) and the libertarians, the anarchist wing in particular (ideas cannot be owned, IPR are state-issued that further expand the state). I do not know how long this trend has been, I just notice them as some friends just email them to me, or post them in my facebook wall.

One such literature is Bourbon for Breakfast: Living outside the statist quo by Jeffrey Tucker of Mises Institute in Alabama. The (3rd) chapter on Technology is about IP, although the focus is on copyright of books.

I have earlier discussed another anti-IP article by Jock Coats of Adam Smith Institute in London in my earlier paper, On intellectual property abolition, part 3. I noted there,

Do the anti-IP people consider a molecule or an atom as "non-tangible"?... for me, a newly-invented molecule (or compound of molecules), say a drug molecule, tire molecule, beer molecule, etc. are tangibles.... Some anti-IP libertarians can unwittingly merge ideologically with the leftists and socialists in arguing for the eradication of IPR in drugs. The higher price of new and patented drugs compared to off-patent and older ones is, for them, proof of the evil of IPR. And this is another dangerous mistake that free marketers from whatever shade should avoid committing. Pricing is a private property right. It can never be communal or government right. 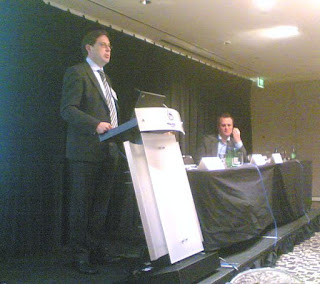 Last September 30, 2010, during the 4th Pacific Rim Policy Exchange in Sydney, Australia, one of the panel discussions was on IP, Jobs and the Economy. One of two speakers there was Michael Williams (in this picture) of Gilbert + Tobin law office in Sydney. His paper was entitled Resisting populist calls for a wind back of IP laws and showing leadership in the promotion of IP laws. 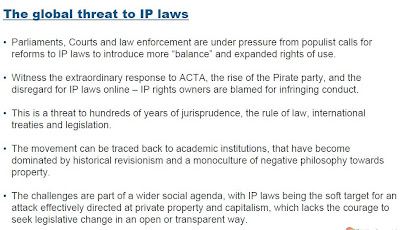 I show here 3 of his 7-slides presentation. Click the slides to get a larger image.

Mr. Williams' concern though, is more with the socialists and anti-capitalist individuals and groups, especially academics, who regard private property rights in general, and IPR in particular, as extension of exploitation and mass disenfranchisement by capitalism. He did not discuss the equally anti-IP sentiment by some libertarians. 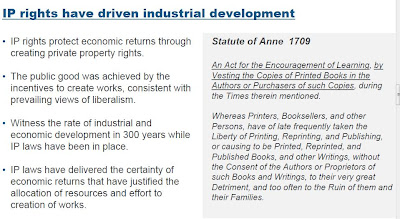 Here he showed one law enacted 302 years ago, the Statute of Anne 1709, giving property rights to authors of printed books. I observe from several literatures of the anti-IP writers, their argument that "IP = monopoly". Since monopoly is evil, then IP is also evil. I will grant that this is a correct proposition if we are talking about an industry or sub-industry monopoly. Say a monopoly in telecommunication, a monopoly in music industry, monopoly in movie industry, and so on.

But I think there is nothing in the IP laws that says "All rock songs (or all action movies, all science fiction books, all anti-hypertension drugs, all racetrack tires,...) are copyrighted by ______ company for its exclusive use, sale, transfer, for __ years." What the IP laws say is that "one copyright for each rock song by each rock band/singer" and there are 1,000 or 100,000 rock bands and singers worldwide producing 100,000 or 1 million rock songs. 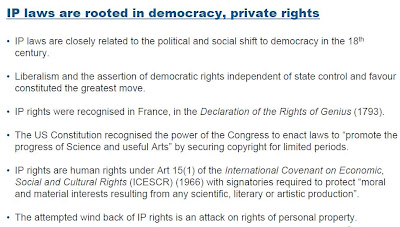 Mr. Michaels correctly asserted that "The attempted wind back of IPR is an attack on rights of personal property." An IPR vested on each author, or composer, inventor, innovator, does not automatically mean that each author or inventor will go for exclusive use and control of his IP work or molecular invention. It is possible that he will waive his IPR and monopoly right of use and share his work with the rest of humanity for free.

The security of an IPR is reserved for those inventors and composers/authors who think they are better recognized and compensated (financially, intellectually, culturally, etc.) if an IPR is granted upon them.

Mr. Michaels concluded that "The recognition of IPR is consistent with the pursuit of democracy, property rights and economic development... Now is the time to strengthen IP laws to drive technological development in the digital age and to provide certainty for investment in the future."

Amen to that.
Posted by Bienvenido Oplas Jr at 1:39 AM